HomeMaterialsNew Form of Printing Produces Curvy Electronics
Recent
Materials
Researchers Use AI and Stimulation to Strengthen the Brain
Nov 30, 2021
Carbon-Fiber Composites on a Roll in Auto Wheels
Nov 30, 2021
Our First Drive in the Lucid Air EV
Nov 30, 2021
How to Build a Better Industrial Automation System Using PLCs
Nov 30, 2021
POLL
Getting Started with Cpputest for Embedded Applications
Nov 30, 2021
Opportunities for High-Performance Polymers in the Semiconductor Space
Nov 30, 2021
Meet the Most Comfortable Keyboard on the Planet
Nov 30, 2021
Mobile Plastic-Waste Upcycling Platform a Finalist in World Design Awards
Nov 30, 2021 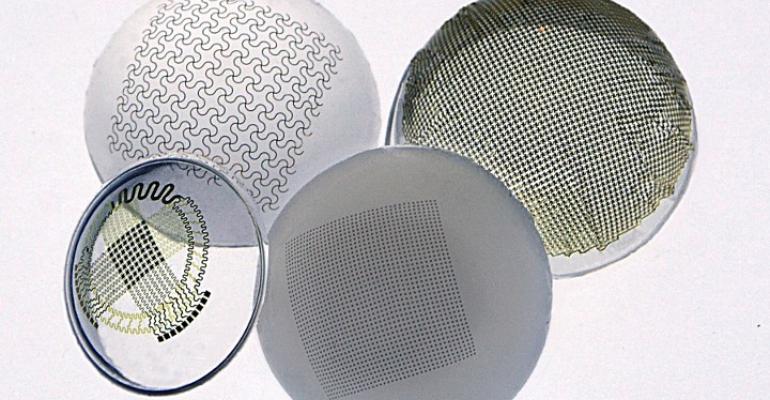 Researchers already have come up with numerous ways to make electronics more flexible. But until recently, creating electronics with a specific three-dimensional (3D) curve has remained an elusive endeavor.

Scientists at the University of Houston (UH) and the University of Colorado Boulder have collaborated to change this scenario with the development of a new printing process that they said can produce 3D curvy electronics on various scales.

The breakthrough paves the way for contact lenses with integrated sensors and electronics to monitor health and improved vision as well as other types of next-generation wearables, optoelectronics, telecommunications, and biomedical applications, researchers said.

“We tested a number of existing techniques to see if they were appropriate for manufacturing curvy electronics,” Yu, also a principal investigator with the Texas Center for Superconductivity at UH, said in a press statement. “The answer is no. They all had limitations and problems.”

However, next-generation demands for devices such as smart contact lenses, curved imagers, electronic antennas, and hemispherical solar cells will require fabrication techniques for curvier shapes ranging in size from millimeters to centimeters with a high degree of accuracy, he said.

“Electronic devices are typically manufactured in planar layouts, but many emerging applications, from optoelectronics to wearables, require three-dimensional curvy structures,” researchers wrote in an abstract for a paper on their work published in the journal Nature Electronics. “However, the fabrication of such structures has proved challenging due, in particular, to the lack of an effective manufacturing technology.”

CAS printing is a rather simple but effective technique for this purpose, according to researchers. It works like this: Researchers inflate an elastomeric balloon and then coat it with a sticky substance to use it as a stamping medium. They then use this object to apply pressure to a pre-fabricated electronic devices to pick up the electronics and then print them onto various curvy surfaces, they said.

In their work, researchers used a manual version of a CAS printer to create a variety of curvy devices, including silicon pellets, photodetector arrays, small antennas, hemispherical solar cells, and smart contact lenses, they said. They also designed an automated version of the printer that should facilitate scaling up production, researchers said.

Another paper featuring the team’s research also is published in the journal Nature.