New Dynamic Hydrogels Are Like Legos for Building Soft Robots 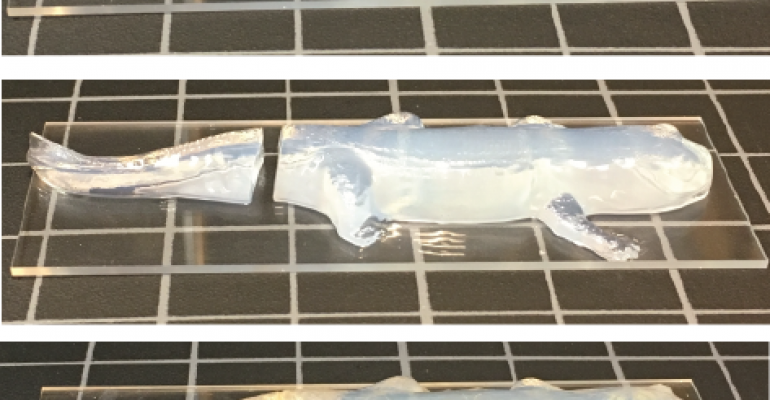 New hydrogels developed by researchers at Brown University show great potential for use in next-generation biomedical, soft-robotic, and microfluidic applications.

Smart materials that can react and change based on environment are the future of materials science. As part of this new generation of research, a team at Brown University has developed a set of dynamic components made of hydrogels that can be used as lego-like building blocks for soft robots and other biomedical devices.

The team, led by Ian Y. Wong, an assistant professor of engineering at Brown, used a new type of dual polymer material, which can be used in a 3D printer to create components that can bend, twist, or stick together when treated with certain chemicals, researchers said.

They also designed hydrogel building blocks they compared to legos that can be carefully assembled then tightly sealed together to form customized soft robotic or microfluidic devices, such as so-called “lab-on-a-chip” systems used for drug screening, cell cultures, and other applications, they said.

Hydrogels are essentially solid polymers that are crosslinked, which basically means their strands are tethered together. Key to the new material’s functionality is its dual polymer composition, which uses the two types of bonds that hold hydrogels together—covalent and ionic—to achieve a desired effect. Covalent bonds are quite strong, but irreversible, while ionic bonds are not as strong but can be reversed by adding or removing ions.

To develop the new material, Brown researchers combined one polymer that’s covalently crosslinked, called PEGDA, and one that’s ionically crosslinked, called PAA. The dual nature of the material means that the PEGDA’s bonds hold the material together, while the PAA’s bonds make it responsive, said Thomas Valentin, a recently graduated Ph.D. student in Brown’s School of Engineering who was a researcher on the project.

“Essentially, the one polymer provides structural integrity, while the other enables these dynamic behaviors like bending or self-adhesion,” he said. “So putting the two together makes a material that’s greater than the sum of its parts.”

Specifically, by putting the material in an ion-rich environment, the PAA would crosslink, meaning it became more rigid and contracted. If researchers take those ions away, the material softens and swells as the ionic bonds break. This same process also enables the material to be self-adhesive when desired, Valentin said. Researchers published a paper published on their work in the journal Polymer Chemistry.

To achieve the material used in their work, researchers put the two separate pieces together and added some ions, resulting in two pieces attaching tightly together. This combination of strength and dynamic behavior enabled the researchers to develop the soft gripper they demonstrated in the paper, he said.

Another more immediate application for the hydrogels is potential use in microfluids, where hydrogels are attractive because they are generally nontoxic as well as soft and flexible, like human tissue, researchers said. The problem for this application of hydrogels typically has been that they are often difficult to pattern with the complex channels that are necessary in microfluidics.

The new material and its modular approach solves this issue by allowing complex microfluidic architectures to be incorporated into each building block and then assembled like legos, Valentin said. Moreover, adding ions to the assembled blocks makes a water-tight seal, he added.

“The modular lego blocks are interesting in that we could create a prefabricated toolbox for microfluidic devices,” Valentin said. “You keep a variety of preset parts with different microfluidic architectures on hand, and then you just grab the ones you need to make your custom microfluidic circuit. Then you heal them together and it’s ready to go.”

Researchers plan to continue to work with the material, with potential next steps to tweak the properties of the polymers to get even more durability and functionality, they said.