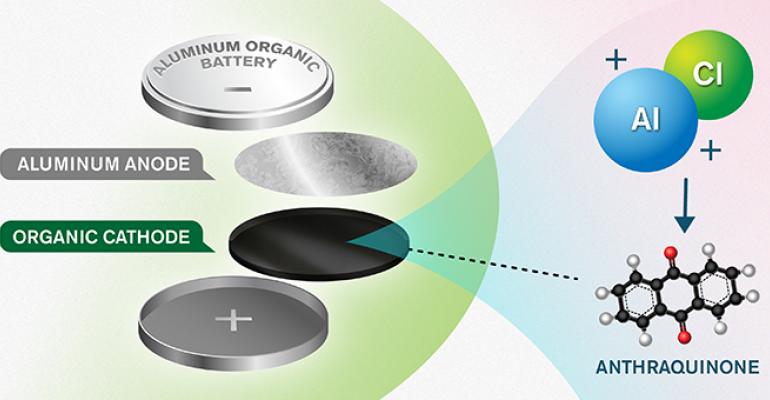 A team of researchers in Europe believes their concept for an aluminum battery will prove to be more energy-dense and environmentally-friendly than lithium-ion.

environmentally harmful compared to lithium-ion batteries,” he told Design News. “Aluminum batteries are more sustainable mainly due to their use of only abundant materials.”

The researchers recently published a paper on their work in the journal Energy Storage Materials.

Lithium-ion batteries have been the norm for myriad electronic devices for some time. But since they aren’t particularly eco-friendly, scientists have long been searching for new designs and materials that will have less impact on the environment.

While the new design is not the first time scientists have attempted to come up with an aluminum battery on par with lithium-ion batteries, it is one of the most successful, the researchers said.

In previous designs, researchers used aluminum as the anode – the negative electrode – and graphite as the cathode – the positive electrode. But graphite does not provide the energy needed for useful battery performance.

In the new design, researchers replaced graphite with an organic, nanostructured cathode made of the carbon-based molecule anthraquinone. This material enables storage of positive charge-carriers from the electrolyte – the solution in which ions move between the electrodes—creating substantially higher energy density than previous aluminum battery designs, Lindahl said.

“Hence, the energy density (the amount of stored energy per mass of active material) could be doubled, compared to previous state-of-the-art aluminum batteries,” Lindahl told Design News. “Or put differently, a battery of the same weight could store twice as much energy.”

Designs for the Future

The use of aluminum over lithium has key advantages for battery design, according to the Lindahl. Aside from its abundance and the already established manufacturing structures in place for the material—which would make battery fabrication less expensive and more sustainable—it is also, in principle, a significantly better charge carrier than lithium. “[Aluminum] is multivalent, which means every ion compensates for several electrons,” Lindahl explained.

However, this also presents a design challenge for the researchers, in terms of developing compatible electrolytes and cathodes. There are also challenges to making an aluminum battery with the same scale and performance levels as lithium-ion batteries

“Although this work shows that novel cathode materials can double the energy density, aluminum batteries are less than half as energy-dense as lithium-ion batteries,” Lindahl said. “But our long-term goal is to achieve the same energy density.”

To achieve this, researchers plan to continue their work to develop better charging mechanisms for the battery electrolyte, among other improvements.

While the scientists aren’t sure aluminum batteries would entirely replace current battery designs, at the very least they could be complementary and used for applications, such as IoT devices and for storage of solar and wind energy, Lindahl told Design News.

This would reserve lithium-ion batteries for use only “where strictly necessary, [such as] in mobile applications where high energy density is most important,” he said.