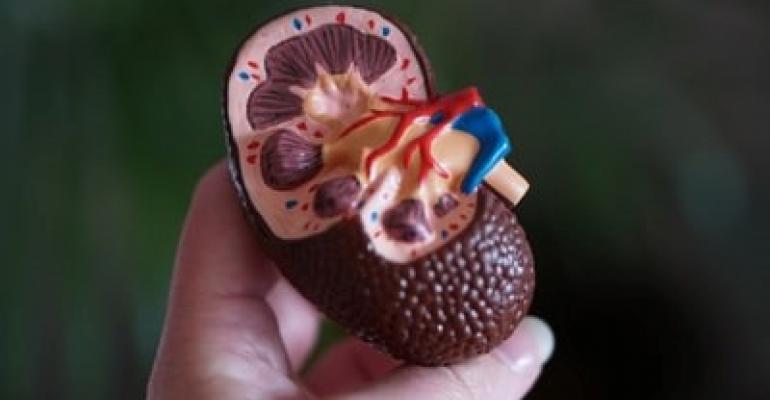 Learn surgery on a bell pepper? Not anymore.

One of the most fascinating things about technological history is seeing how innovations in one field have ripple effects that couldn't have been predicted by their original innovators. When Henry Ford made the automobile affordable for the everyday worker, could he have had any idea that would play a huge role in creating the suburbs? Probably not. When Vincent Cerf and other graduate students at UCLA in the 1960s developed packet switching as a way for the military to more reliably transmit data, could they have had the slightest inkling they were laying the building blocks for the current Internet and the staggering level of interconnectedness we experience today? Probably not.

The same can almost certainly be said about Scott Crump and Chuck Hull. When they were filing their patents in the 1980s for the first 3D printing technologies, could they have had any idea that 30 years later their original innovation would bring us to the cusp of the healthcare revolution we're about to experience?  Although I've never met or spoken to Crump or Hull, my guess is they couldn't have seen this coming.

After years of painstakingly small progress, we're on the verge of a healthcare revolution that not only promises to improve physician training and patient outcomes, but also brings a desperately needed level of efficiency to the medical industry in terms of lowering costs and using resources more efficiently. I'm referring to the bit-by-bit progress that has been made toward patient-specific 3D printed anatomical models that include the specific pathology of the patient. In other words, instead of seeing a generic shaped-kidney with a generic-shaped tumor in it, surgeons can now hold in their hands, a replica of a specific kidney with a specific tumor and manipulate that model with a scalpel or other surgical tools just as if he or she were doing the actual procedure.

While patient-specific models have been around for a while, they have usually been in hard materials that are visually accurate but offer little functionality. With today’s 3D printing technology, such models can be used for pre-operative surgical simulation as well as far greater medical education and residency training. This has enormous implications to improve the quality of healthcare.

Working with an Exact Model before the Procedure

We're beginning to see data that shows if a physician can have a patient-specific model prior to a procedure, he or she can not only practice the procedure if so required, they can also show that model to the patient who gets a greater level of comfort now that they have a better understanding of what they are about to undergo. In addition, the data suggests being able to practice on a patient’s specific model first can decrease the time for a procedure.

For example, if the average time for resecting a tumor after clamping the renal artery to save a kidney is 30 minutes, once the surgeon can “practice” first perhaps the time goes down by a few minutes. Those few minutes can make a difference between saving the kidney or ending up on a lifetime of dialysis. It's important to state that years of research on this topic is still needed, but the early data suggests this research is wholly justified.

Two individuals at the forefront of this revolution are Dr. Jacques Zaneveld and Dr. Smriti Zaneveld, co-founders of the medical 3D printing startup Lazarus 3D. Lazarus has taken the ability to produce patient-specific anatomical models to a new level with a unique approach they have been developing over the past four years, which combines manipulating the durometers of soft polymers with 3D printing to produce realistic anatomical models that can be cut with a scalpel or manipulated with a variety of surgical instruments just like real tissue. This has enormous implications for the quality of patient outcomes in the years to come.

When asked about the catalyst for launching Lazarus 3D and developing their own proprietary technology, Jacques explained, "The gap between medical training and the reality of actually practicing surgery was simply too great to ignore. You have residents and even experienced physicians training on bell peppers to learn a procedure."

Smriti commented that "Seeing OBGYNs use playdough or flower pots as make-shift training models of women’s anatomy to learn complex medical procedures was terrifying. The training that residents were provided was far from an accurate representation of human anatomy and simulation was nowhere near good enough.” So, starting at their kitchen table four years ago, they began experimenting with different durometers of silicone in combination with FDM technology to produce patient-specific anatomical models that would mimic the feel of human tissue. Shortly after his “eureka” moment, Jacques filed the patent for the innovation which has now been issued by the USPTO.

Lazarus 3D has shipped hundreds of anatomical models and patients’ organs worldwide. In these models, the kidney with a tumor feels like a kidney, and the tumor feels like a tumor; a heart feels like a heart but with the correct internal anatomy; and even a bladder with the texture of cancerous tumors on the internal surface can be picked up under various shades of blue and white light.

In addition to the medical benefits, we're finally at the stage where the healthcare industry seems to have caught up in realizing the benefits of including patient-specific models as something to reimburse in the field of healthcare. In July, the AMA announced it had accepted the recommendation of the College of Radiology (a proponent of the use of 3D printing in healthcare) to reimburse “the production of 3D printed anatomical models and personalized 3D printed cutting or drilling tools.” The reimbursement covers a wide range of anatomy from bones and arteries to organs and even the brain.

Physicians will have the opportunity to practice a highly complex procedure first. Will practicing a procedure on a patient specific model always be necessary? No. But as Jacques pointed out, "The vast majority of procedures are routine enough so that preoperative models are not needed. But for especially complex cases a patient specific model that can be practiced upon does have enormous benefit in improving the quality of the outcome, as well as decreasing the actual time the procedure takes. And the less time the procedure takes, the greater the likelihood of avoiding complications".In addition to the potential for improving patient care, Smriti and Jacques have realized another benefit.

Using Models to Get Creative

Having worked with physicians at the Cleveland Clinic and the MD Anderson Cancer Center, as well as doctors from hospitals around the country, the team at Lazarus 3D has learned that giving doctors realistic models for simulation allows them to be creative in ways they simply couldn't have been otherwise. Meaning that they can try new approaches to a procedure they wouldn't have had the freedom to do previously in a totally risk-free environment. This is leading to innovations in a much shorter timeframe.

From a strictly business point of view, this is an excellent opportunity for hospitals to get greater turnover in their operating room in a 24-hour cycle, which increases revenues while creating a greater return on the sunk investment of medical equipment while also decreasing the probabilities of readmittance from postoperative issues. Insurance companies should also see cost savings as procedural times and readmittance rates potentially decrease. All of this is going to take years of research and data collection to verify. But the potential benefits are so enormous that the cost of such research is more than justified.

“We've done a lot of work these past four years and from the point of view of running a business we've learned some hard lessons, but we truly believe this approach to the practice of medicine benefits everyone,” Smriti said. “Better models for training and surgical simulation, whether it is for residents or experienced physicians, benefits everyone. Ultimately, our work is humanitarian.”

Jack Heslin is a freelance contributor to DesignNews.com. He works with Stratasys Direct Manufacturing helping companies in Connecticut and New York evaluate which additive technologies and materials are right for projects that include prototyping, tooling and production quality parts.