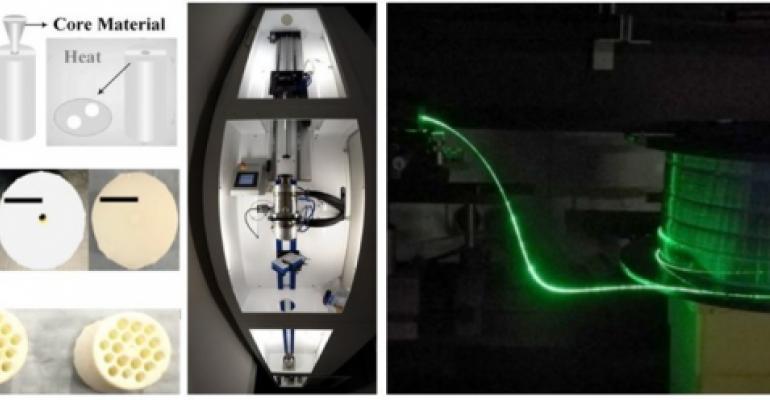 A new 3D printing process developed by researchers at the University of Technology in Sydney, Australia could drastically reduce the cost of manufacturing glass optical fibers. Not only would this lead to cost reductions in manufacturing the notoriously expensive fiber optic cables for telecommunications networks, it could also lead to new designs and applications.

The current fabrication process requires spinning tubes on a lathe with fiber cores that are precisely centered, which is labor-intensive, said John Canning who led the research team.

The new process relaxes some of the geometry requirements, which is one of the most complex parts of the process.

“With additive manufacturing, there’s no need for the fiber geometry to be centered,” Canning said in a press statement. “This removes one of the greatest limitations in fiber design and greatly reduces the cost of fiber manufacturing.”

The team published a paper on their work in the journal Optics Letters.

An evolution in fabrication

The researchers said their invention was informed by earlier research in which they fabricated fiber using a polymer material from a 3D-printed preform. Previously, it had been immensely challenging to use silica in this type of printing process because of the high temperatures (more than 1900 degrees Celsius) required to print glass.

“Thanks to a novel combination of materials and nanoparticle integration, we have shown it’s possible to 3D print a silica preform,” Canning said in the press statement.

To fabricate silica glass, Canning and his team used a direct-light projection (DLP) 3D printer, which is commercially available and typically used to create polymer objects. For this type of fabrication, the printer uses a digital light projector to polymerize photo-reactive monomers.

Creating a silica object required modifying the process as well as the materials used. On the materials side, the researchers added silica nanoparticles into the monomer at amounts of 50 percent or greater by weight.

They then designed a 3D-printed cylindrical object that contained a hole for a core, and inserted the material mix of polymer and nanoparticles into the hole. This time, however, they changed the formula a bit, adding germanosilicate to the silica nanoparticles. This created a higher refractive index to allow for the integration of a range of dopants, the researchers said.

The next step in the process required a unique heating process called debinding, which removed the polymer from the materials mix to leave only silica nanoparticles bound by intermolecular forces behind.

Finally, by raising the temperature further, the researchers fused the nanoparticles into a solid structure that could be inserted into a draw tower, where they once again heated and also pulled the object to create the optical fiber.

The path to commercialization

To validate their process, the researchers fabricated a preform equivalent of a standard germanosilicate fiber that could be used to create multi- or single-mode fibers, Canning said.

They did run into a limitation in their work when they observed high light losses in the first optical fibers they printed, they acknowledged. However, Canning said they have since identified the issue and are working to remedy it.

“With further improvements to limit the light losses, this new approach could potentially replace the conventional lathe-based method of making silica optical fibers,” he said in a press statement.

Using this process in place of current manufacturing would reduce costs across the board – not just in fabrication and material costs but also in terms of labor, since it also reduces training and the danger factor production workers face, Canning said.

The team is currently seeking to partner with a mainstream commercial fiber fabrication company to improve and commercialize the technology. The researchers also wish to accelerate research and drive new manufacturing approaches in this field.