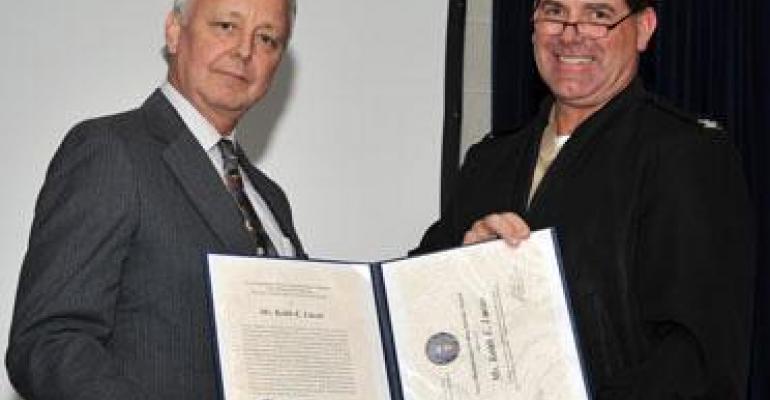 A US Navy researcher was honored for helping design a physical-scale modeling system to combat corrosion on ships. The system is projected to save the military up to $10 million annually in restoration costs.

Keith Lucas, a materials research engineer at the Naval Research Laboratory (NRL), received the 2012 Department of the Navy Meritorious Civilian Service Award for his team's 20 years of work to design physical scale models of ships to advance impressed current cathodic protection (ICCP), a method the Navy uses to protect the underwater portion of a ship's hull from corrosion.

Lucas told us that, in ICCP, anodes (devices that emit electric currents) are attached to the hull to change the metal's polarization to a "benign chemical reaction" state that will not corrode. The Navy has been using such systems for many years, but they historically have been an imperfect science. "The trick to these systems is you have to design them in the right way," he said. "You have to put the anode in the right place." 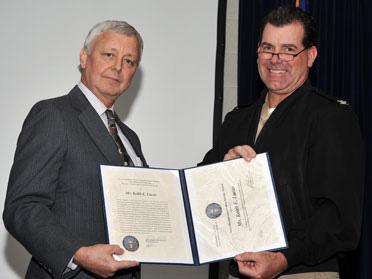 In the 1980s, when Lucas and his team began their research, anodes were placed "empirically," meaning engineers never knew the result of the treatment on the hull until after the ICCP system was used on it. "We had overpolarization and underpolarization," Lucas said. "That's bad. We wanted them to be the way we want them to be."

To develop a more precise system, researchers created fiberglass models (using steel in specific places where anodes would be placed) and placed them in tanks to test the performance of systems. This has resulted in a far more accurate way of using ICCP to preserve ship hulls. "We look at how the hull is when it's brand new and add steel that's going to corrode such that we can predict years into the future." The military now uses these models to design ICCP systems to prevent corrosion.

The Navy spends nearly $3 billion annually to fix corrosion damage of ships. The NRL says the methodology developed by Lucas and his team has been used with eight Navy ship classes and three submarine classes to cut these costs.