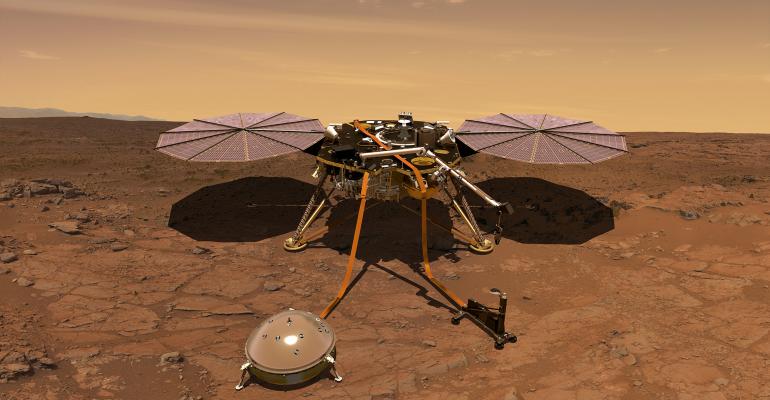 Launching an unmanned probe to the planet Mars and successfully landing safely on the Martian surface requires a spacecraft with almost complete autonomy and a fair amount of luck.

On a human scale, Mars is far away. It takes more than six months for a spacecraft, traveling at more than 12,000 mph, just to reach the planet. More importantly, once there, it takes radio waves—traveling at the speed of light—about eight minutes to reach the Earth. That removes any opportunity for decision-making from Earth-bound human controllers. By the time a problem is discovered, transmitted back to Earth, acted upon, and instructions are sent back to the spacecraft, the lander will likely be a smoking pile of space junk on the planet surface. Landing on the Martian surface by an unmanned spacecraft must therefore be automatic and completely autonomous.

It turns out that landing safely on Mars is difficult. Only 40% of the spacecraft sent by any space agency have been successful, with the US the only nation whose missions have survived the landing. Fortunately, on November 26, NASA’s InSight lander made a nearly picture-perfect approach and landing on the red planet. Almost immediately, it sent back a picture of its new neighborhood. This was the eighth successful landing of a spacecraft on Mars.

Study the Deep Interior of Mars

InSight (Interior Exploration using Seismic Investigations, Geodesy, and Heat Transport) is a mission in the NASA Discovery Program. Its goal is to place a single geophysical lander on Mars to study its deep interior. Using an array of geophysical instruments, InSight will examine the seismology (Mars quakes), subsurface temperature, and planetary motions to help better understand the processes that shaped the rocky planets that inhabit the inner part of our solar system.

How to Get There

But first, InSight needed to land safely on the Martian surface—a process with thousands of steps, according to a NASA video detailing the landing and featuring Rob Manning, chief engineer at NASA’s Jet Propulsion Laboratory (JPL) in California. The process of getting from the top of the Mars atmosphere to the surface is called Entry, Descent, and Landing or EDL. Before reaching the planet, the InSight spacecraft is in cruise stage, with a solar array facing the sun to generate electricity, an antenna facing the Earth for communications, and an astronavigation system using the positions of the stars to help stay on course.

“The vehicle is moving at nearly 13,000 mph, but it’s hitting the top of the atmosphere at a very shallow angle—12 degrees. Any steeper and the vehicle will hit the thicker part of the atmosphere and will melt and burn up,” said Manning. If the spacecraft approached at any shallower an angle, it would bounce off the atmosphere of Mars and head back into space. As the lander travels closer to the planet and the atmosphere thickens, friction causes the heat shield to reach 1,000°C—hot enough to melt steel.

The friction causes the vehicle to slow from about 13,000 mph to about 1,000 mph. At ten miles above the surface, a supersonic parachute is deployed. Fifteen seconds later, the heat shield is jettisoned and ten seconds later, pyrotechnic devices are used to unfold and lock the lander’s three legs. A minute later, the landing radar—which points down to the surface—is switched on.

Everything Has to Go Right

“At about a mile above the surface of Mars, the lander falls away from the back shell (which is attached to the parachute) and lights its engines,” noted Manning. The vehicle uses its rocket engines to rotate out of the way of the descending back shell and parachute. “The last thing that has to happen is that on the moment of contact, the engines have to shut down immediately—if they don’t, the vehicle will tip over,” said Manning.

The entire landing process takes about 7 minutes. And judging from the tension and subsequent relief evident in live videos from the JPL control room, the landing was picture perfect. Because of all of the dust kicked up in the landing sequence, the JPL team is keeping the dust shields on InSight’s cameras. But even with the shields in place, the spacecraft has sent back images from the planet surface. Several hours later, it deployed its solar panels to provide the electricity needed for continuous operation of the lander. If everything continues to go well, InSight will spend the next two years using its instruments to investigate the deep interior of the planet Mars.