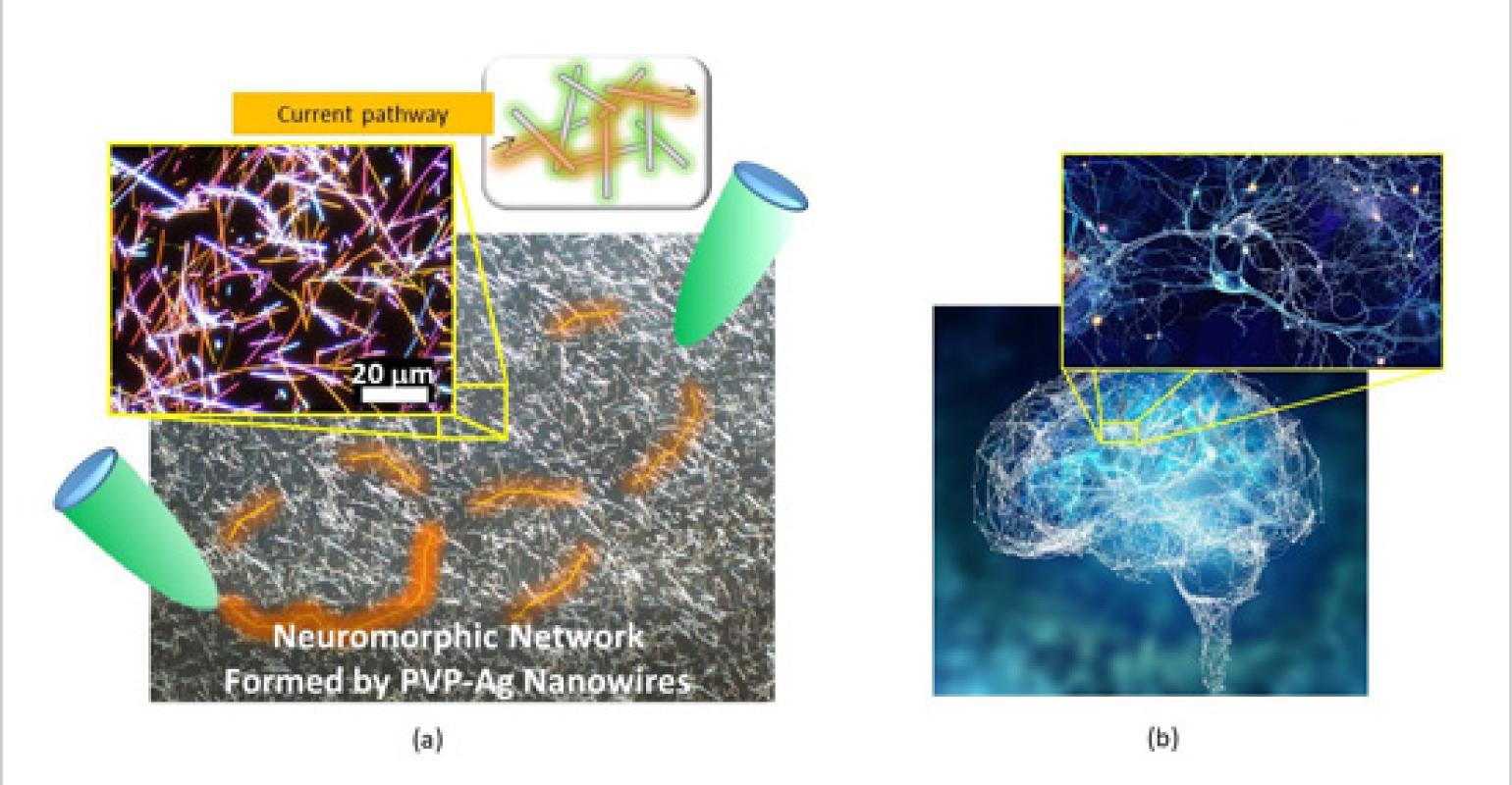 Researchers have designed a network that can provide clues as to how high functions of the brain work to inform future technology development.

An international group of researchers has made a breakthrough in the development of artificial intelligence (AI) with the design of a nanowire network capable of a complex brain-like functions.

The team of scientists at Japan’s National Institute of Materials Science (NIMS) created what is called a “neuromorphic network” by integrating numerous silver nanowires covered with a polymer insulating layer about 1 nanometer in thickness. The network functions because a junction between two nanowires forms a variable resistive element, or a synaptic element, that behaves like a neuronal synapse.

The network, then, is comprised of a number of these interacting synaptic element to form the larger network, which is triggered when a voltage is applied, causing it to find optimal current pathways—or the most electrically efficient pathways.

Using this network, the team was able to generate electrical characteristics similar to those associated with higher order brain functions unique to humans, such as memorization, learning, forgetting, becoming alert, and returning to calm.

The network is part of a larger scientific aim to improve artificial intelligence through what’s called neuromorphic computing, said Tomonobu Nakayama, research leader and deputy director of the International Center for Materials Nanoarchitectonics. “Neuromorphic computing has been attracting much interest,” he told Design News, citing some recent developments in the areas such as the development of neural chips such as the Intel’s Nervana and IBM’s True North Chip. “These challenges are based on emulating biological signals in the brain using electric circuits, and beautifully simulate neural network modeling developed so far.”

The NIMS team has seen limitations in some of the neuromorphic computing work being conducted, however, with “fundamental features of the brain missing,” Nakayama told us.  “The problem here is all AI technology at the moment needs massive sets of data connected to computer systems even for the neural chip-based systems,” he explained. “The. complexity of wiring is one of the issues to be solved, since the brain is allowing a single nerve cell to communicate with 10,000 other cells via 10,000 synapses while present semiconductor technology—lithography--cannot realize such a complex wiring using lithographic techniques.”

Also, the human brain can engage in self-organization and the creation of functions, “so we have associative thinking, creativity, intuition, and so on,” Nakayama said, something that is currently lacking in AI technology.

While the network developed by Nakayama’s team does not solve all of these problems, it does provide a starting point to develop more complex AI as well as introduces a “design-less” approach to neuromorphic nanowire networks that are “naturally emerging without. software programs,” he said. “So now we hope our work might be able to contribute to construct better hypothesis on the origin of our ‘intelligence’ and ‘creativity’ and to find a way to open a new type of information processors.”

Brain-Like Technology
Researchers published a paper on their work in the journal Nature Scientific Reports.

The team is currently developing a brain-like memory device using the neuromorphic network material that they hope will operate using fundamentally different principles than those used in current computers. While computers are currently designed to spend as much time and electricity as necessary in pursuit of the most optimal solutions, the new memory device is intended to make a quick decision within particular limits, even though the solution generated may not be the absolutely optimum.

“For example, after we store shapes characters in a network only by providing a part of the shape of a character, the device would suggest possible ones without any programs,” Nakayama explained. “It's a sort of associative or cognitive information processors; however, since it does not require any programs and computers, it would be energy-efficient processors.”

The network also makes it possible to develop energy-efficient autonomous systems
that dynamically make decisions in response to environmental changes, something AI does not currently. Ultimately, researchers hope their work provides a deeper understanding of how the brain works to inform future technology and applications.