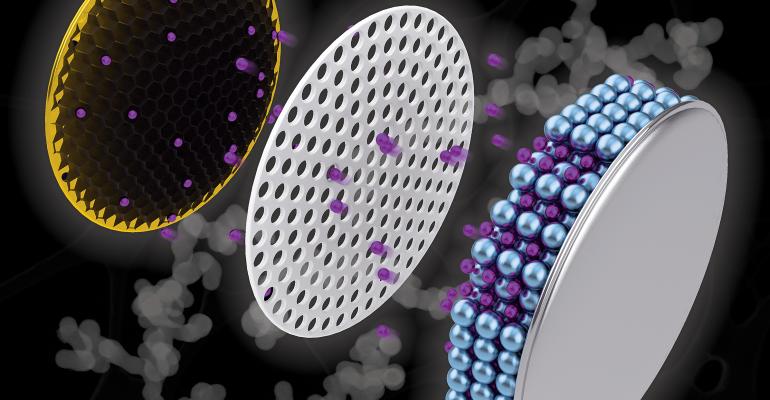 Engineers at Purdue have used nanochains to improve the performance of lithium batteries.

Even with advancements such as fast charging and longer lifespans, overall battery performance for ubiquitous devices like smartphones has been slow to evolve. But a team of chemical engineers at Purdue University have used nanomaterials called “nanochains” in a electrode design they say can improve the life and charging speed of current lithium batteries.

The team published a paper on its work in the journal Applied Nano Materials.

Nanochains are nanoparticles of an element that are connected together, forming a chain-like architecture, P.V. Ramachandran, a professor of organic chemistry at Purdue told Design News. The net-like nanochain structure is comprised of antimony, a metalloid known to enhance lithium ion charge capacity in batteries, he said.

“Because of the chain-like architecture, the lithium ions and electrons move faster, reducing charging time and providing increased capacity because of the allowable expansion during charging,” Ramachandran said.

He said this performance is an improvement over typical lithium-ion battery electrodes, which are typically comprised of graphite.

A battery’s longevity is based on how many lithium ions can be stored in the battery’s negative electrode material. The challenge with current battery designs is that materials with a higher lithium ion storage capacity are either too heavy or the wrong shape to replace graphite, “which possess lower capacity value compared to the  antimony-based anode,” Ramachandran said.

Researchers developed the antimony electrode by applying a reducing agent and a nucleating agent to connect tiny antimony particles into a nanochain shape.

While some types of commercial batteries already use carbon-metal composites similar to antimony metal negative electrodes like the one Purdue team developed, there is a limitation to this design, the researchers said. The composite tends to expand up to three times as it takes in lithium ions, causing it to become a safety hazard as the battery charges.

Ramachandran said he and his team had to accommodate for this expansion in their design. They used ammonia-borane specifically to create empty spaces, or pores inside the nanochain, to accommodate expansion and suppress electrode failure.

After some experimentation, the team found that antimony-chloride produced the desired nanochain structure for optimal electrode performance. The resulting material performed well in tests, keeping lithium-ion capacity stable after charging for 30 minutes for at least 100 charging-discharging cycles, according to the researchers. They believe, however, that this is nowhere near the limit of battery life for devices using the electrode.

The electrode design has the potential to scale for larger batteries as well. Ramachandran and his team have plans to test it next in pouch cell batteries. The team will also explore using different anode materials for future battery designs.

“We are working towards understanding the scientific mechanism of such chain-like architectures that can be mimicked to other anode materials such as tin, silicon, etc. to make even more efficient batteries,” Ramachandran said.