Nano-composite Moves in Response to Light 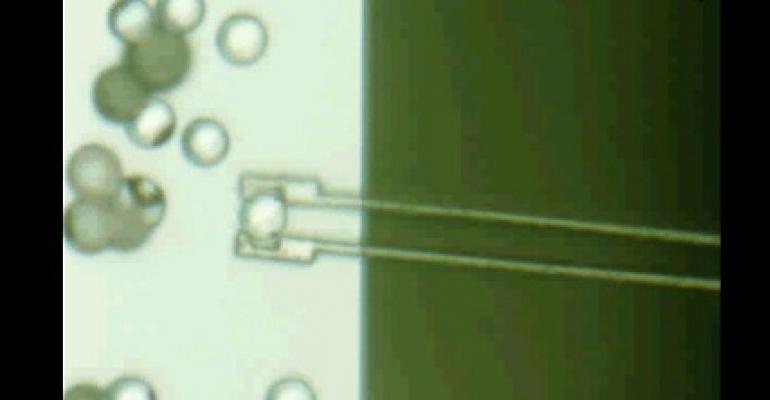 Worcester Polytechnic Institute has found a way to use light to produce motion in a semiconductor nanocomposite material.

There is tremendous amount of interest in the potential of infinitesimally small machines. Whether they are to be incorporated into integrated circuits or even implanted in the human body, this is indeed a new frontier. Last year’s Nobel Prize in Chemistry went to three researchers whose work led to the first molecular motor.

How to power these tiny machines remains a research topic. Bringing electrical contact to such devices while avoiding short circuits is clearly a challenge. Some of the Nobel machines used biochemical power.
A third approach has emerged from the research of Balaji Panchapakesan, associate professor of mechanical engineering at Worcester Polytechnic Institute (WPI)who has found a way to use light to produce motion in a semiconductor nanocomposite material.

A microscopic gripper made with a novel semiconductor material developed at Worcester Polytechnic Institute reaches out for a grasps a plastic bead that is the same size as a human cell. (Source: WPI)

Panchapakesan’s team was actually looking into electro-chemical actuation when they made the discovery. The first step came in dramatically improving the light sensitivity of materials such as carbon nanotubes to light. Then, as Panchapakesan told Design News, “When we hit them with light, these things actually started to move.”

That set them off on a new research path, in the area of photo-mechanical actuation. They turned their attention to two dimensional, multi-layered composites consisting of  transition metal dichalcogenide or TMD, attached to a polymer. TMD is a semiconductor that has been receiving quite a bit of attention lately due to their high level of optical absorption in the visible range at specific wavelengths. This is due to a phenomenon known as a Van Hove singularity.

Panchapakesan explains that when you apply strain to this material, the bonds between the atoms actually change, as a result the band gap is actually changing, which increases optical absorption in the near IR.  As they absorb light, they produce phonons or lattice vibrations, that are essentially “particles of heat.” It’s ultimately the heat that drives the polymer to move.

Conceptually, it’s a bit like a bimetallic strip at very small scale, only the underlying physics are different. In a bimetal, two dissimilar materials  (usually copper and steel) are bonded together. They move in response to heat due a difference in thermal expansion rate, which produces a bending action. In this case, two dissimilar materials, a semiconductor and a polymer, are also joined together. However, the heat is produced internally when the structure is strained and then exposed to light. Due to the enhanced optical absorption of the semiconductor, heat is produced, which is transferred to the polymer. The amount of light absorbed can be controlled by adjusting the band gap and the amount of motion produced can be considerable. Some materials demonstrated the ability to sustain elastic deformation of 25% before failure.

The mechanical response is also chromatic, which means it varies by the wavelength or color of the light.

In simple terms, says the professor, “When you radiate light onto this composite, which consists of a polymer and semiconductor in atomically thin layers, the light is selectively absorbed by these semi-conducting molecules, and that actually causes heat to be generated within this material, causing motion of the polymer chains.”

More precisely, from the publication, “Applying uniaxial tensile strains to the semiconducting few-layer 2H-MoS2 crystals in the nanocomposite resulted in spatially varying energy levels inside the nanocomposite that enhanced the broadband optical absorption up to 2.3 eV and subsequent mechanical response. The unique photomechanical response in 2H-MoS2 based nanocomposites is a result of the rich d electron physics not available to nanocomposites based on s-p bonded graphene and carbon nanotubes, as well as nanocomposite based on metallic nanoparticles. The reversible strain dependent optical absorption suggest applications in broad range of energy conversion technologies that is not achievable using conventional thin film semiconductors.”

The technology will likely give rise to a wide range of applications, the most significant of which may not have been imagined yet. These might include non-contact or remote switching, triggered by lasers or other light sources. Nanorobots for repairing circuits, or in medicine, where a nano-sized gripper could be used to grab a single-cell for analysis or treatment. Solar cells could utilize the enhanced optical absorption property for increased performance. On a larger scale, many of this could be combined to produced solar powered machines that might be used in space, or in other remote areas, where power is not available.