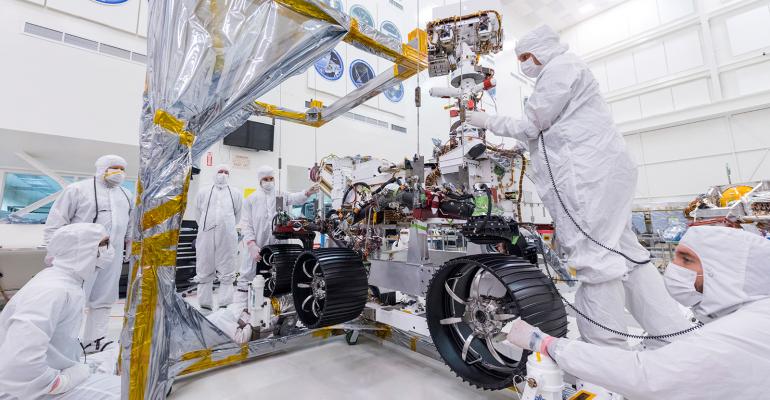 A contest has been created to allow K-12 STEM students a chance to name NASA’s Mars 2020 robotic rover.

One of the often overlooked aspects of NASA’s Apollo program to land a man on the Moon was the way it influenced school age children to study science and technology. Now, 50 years after the first Moon landing, NASA is teaming with national laboratory Battelle and the Future Engineers of California to run a nationwide contest giving K-12 students in United States schools a chance to name the Mars 2020 Rover. The Mars 2020 “Name the Rover” contest opens to students in the Fall of 2019. According to a Battelle news release, the student contest is, “part of NASA’s efforts to engage the public in its missions to the Moon and Mars.”

The unnamed robotic Mars rover weighs in at more than 2,300 pounds. Its mission is to search for signs of past microbial life, while also characterizing the planet's climate and geology, and collecting samples for future return to Earth. All of this will pave the way for future human exploration of the planet.

NASA seeks to engage U.S. K-12 students in the engineering and scientific work that makes Mars exploration possible, helping to create the next generation of science, technology, engineering, and mathematics (STEM) leaders.

"We’re very excited about this exceptional partnership," said George Tahu, Mars 2020 program executive in NASA's Planetary Science Division at the agency’s Headquarters in Washington. "Contests like this present excellent opportunities to invite young students and educators to be a part of this journey to understand the possibilities for life beyond Earth and to advance new capabilities in exploration technology.”

The Mars 2020 Project at the Jet Propulsion Laboratory (JPL) manages rover development for NASA’s Science Mission Directorate. NASA's Launch Services Program, based at the agency's Kennedy Space Center in Florida, is responsible for launch management. Mars 2020 will launch from Cape Canaveral Air Force Station in Florida in July 2020 and is expected to arrive at the Red Planet in February 2021.

Beginning next week, Design News will run an exclusive series of SPACE WEEK articles to celebrate and commemorate the 50th anniversary of the Apollo 11 Moon landing.