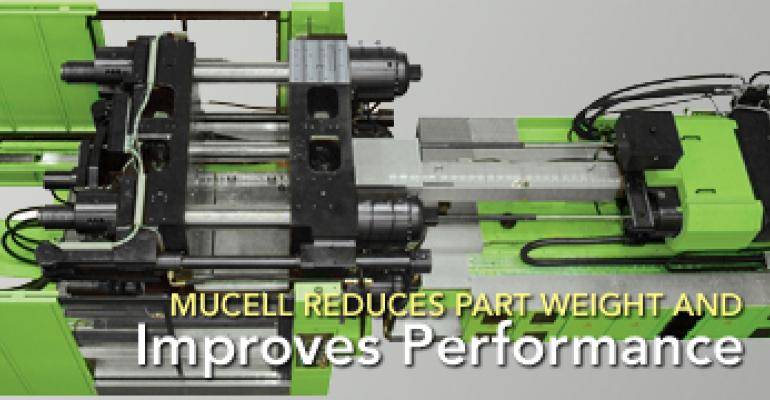 This year's National Plastics Exposition in Chicago (June 22-26) will be a great place to scout new green materials' technologies. Look for the latest engineering ideas ranging from bioplastics to new materials and processes that reduce component weight.

One promising idea for design engineers is microcellular foam, which will be demonstrated at the Engel booth (24000) in McCormick Place South.

Controlled use of supercritical gases such as nitrogen during injection molding produces a 10-percent-or-more reduction in part weight and significant energy savings. And because cycle times are reduced, presses are 20 to 33 percent more productive. The technology, originally developed at MIT, is targeted at precision and engineered plastic components with maximum wall thicknesses of less than 3 mm.

Key quality parameters such as flatness and warpage are also improved because pack and hold phases in the injection cycle are eliminated.

Engineers at Southco, a major fastening technology company, are among the super users of the MuCell foam process. "We typically seek to achieve a five-percent weight reduction, but our customers aren't overly concerned with that," says Southco's Principal Engineer Glenn Anderson. "They're primarily after improved quality. We do experience cycle-time savings to some degree based on the part being produced, but that's more of a side benefit at this point in time." Anderson says Southco has achieved as much as a 40-percent reduction in part weight.

Southco leveraged the technology improvements to win business in the automotive industry.

"I'm always looking for a competitive edge for potential programs," says Bill Sokurenko, business development manager at Southco. "The automotive industry is high on innovation, but they're also very conservative. MuCell helped us win business on large automotive programs because of the benefits we gained." Southco has made more than six million parts a year for automotive customers with the MuCell process.

"We're still looking at highly engineered, functional touch points in vehicles that are A-surface components (where MuCell could be applied), whether they're on the instrument panel or in an around the general cockpit area," says Sokurenko.

The big new push for the microcellular foam will be in large-part automotive applications.

At the NPE, Engel will be showing parts made on a 1,000-ton press using the "core-back" process, in which the back of the mold is partially extracted after an initial mold filling. The foam continues to expand, creating a multilayer structure.

Mazda announced the core-back process reduced component weight up to 30 percent and will be used on parts for 2011 model-year cars. Initial target applications for the process include instrument panel retainers and door panel liners.

"When you combine core-back and the MuCell process, you can essentially saturate the polymer with super-critical fluid, or gas in its super-critical state, while keeping the mold closed under pressure," says David Bernstein, president of Trexel, which was granted an exclusive license to market the MuCell process. The mold can then be precisely opened to get maximum expansion. "You get a much thicker part, but one that is much less dense, in fact as much as 75 percent less dense," says Bernstein.

The bubbles in the outer layer are microscopic to ensure necessary strength and rigidity, while the size of the bubbles in the core layer can be adjusted to reduce its density as desired. Because the core back process controls the foam's structure, it can be used to enhance the heat insulation and acoustic characteristics of plastic parts, according to Mazda.

Steve Braig, president of Engel's North American operations, says the process is suited for any flat parts. "Design engineers can now re-think the mechanics on some existing applications in plastic because dramatic weight reductions are realistic," Braig says. Trials can be conducted at Engel's factory in York, PA, one of two remaining factories in the United States that make injection-molding machines.

Implementation of the MuCell process is not easy. Southco's Glenn Anderson says, "A person implementing the MuCell technology really has a steep learning curve to understand how to make the process work and how to ensure reliable output. Also, if you're making a plastic bucket, for example, you may not really care that much about the mechanical properties. You're interested in how does it look and how much money can I save. With engineered fasteners, we need to make sure we have the design margins where we need them so that we don't have any issues downstream. Each tool brought its own characteristics in terms of how you would mold solid or in MuCell."

More than 300 machines globally are now making parts with the MuCell process. Other commercial parts include electrical components, electronics, business equipment and printer components, as well as packaging containers.

The process is totally different from gas-assist injection molding, in which gas goes into a mold cavity following resin injection and is used to push the melt stream to the cavity wall. In the MuCell process, supercritical fluid is injected in the barrel, and is part of the melt stream.

In one of the newer developments, MuCell can now be applied to long-fiber reinforced thermoplastics (LFRT) from Ticona.

"Virtually warp-free, light-weight parts molded of Celstran LFRT are now a viable option for OEM designers and injection molders developing large parts and structural profiles," says Steven Bassetti, marketing manager for Ticona. "The Ticona team, working in conjunction with Trexel, developed extensive data for the Celstran LFRT grades using polypropylene and nylon 6 and that will help customers predict the performance of parts made with the MuCell process using the new screw."

Ticona produces LFRT grades through use of  pultrusion technology that fully impregnates the long fibers to deliver optimal reinforcement to the plastic matrix. Unlike conventional short-fiber reinforced materials, the longer fibers present in molded parts mechanically interact with each other to form an internal glass fiber "skeleton" that limits anisotropic shrinkage and greatly reduces warpage.

The new screw design uses a lower compression ratio, 2.0:1 as compared to 2.5:1, and incorporates significant changes to the center restriction element and the wiping and mixing sections to reduce shear. Testing on these screws has been done using the MuCell process with up to 0.6-percent nitrogen in a Celstran LFRT grade that uses 40-percent glass-fiber-filled polypropylene without observing process variations.

Among other green highlights at the National Plastics Exposition will be new plastics made from renewable resources. Some of the key players include:

DuPont (West Hall, booth 113011) is expected to exhibit its latest plastics made from agriculturally sourced polylactic acid. Sorona EP, Hytrel RS and Zytel RS include renewably sourced biobased ingredients and can deliver additional benefits, such as improved stain resistance, appearance and better durability when compared to their petroleum-based counterparts. For example, Sorona EP polymers contain between 20-percent and 37-percent renewably sourced material (by weight) derived from corn. Initial grades with 15-percent and 30-percent glass reinforcement were made available last year for development programs.

Metabolix (West Hall, booth 119020) will show products made from its Mirel polymers, which are harvested from vats of genetically modified microbes that feed on glucose from plants, such as corn. Metabolix and Archer Daniels Midland Co. are commercializing Mirel through a joint venture called Telles. The first commercial-scale Mirel production plant is being constructed adjacent to ADM's wet corn mill in Clinton, IA. Commercial product is expected to be available from the plant this year.

Dow Chemical (West Hall, booth 13a) has hooked up with Brazilian sugar cane producer CrystalSev to build a 700 million lbs/yr polyethylene plant in Brazil â€“ the biggest such plant ever contemplated. The molecular structure of the sugar-derived polymer will be identical to the structure of plastics made from naphtha or natural gas liquids. Dow is the biggest producer of PE in the world. The plant is expected to start production in 2011 and will have a capacity of 350,000 metric tons annually.
0 comments
Hide comments
Related
You Might Like