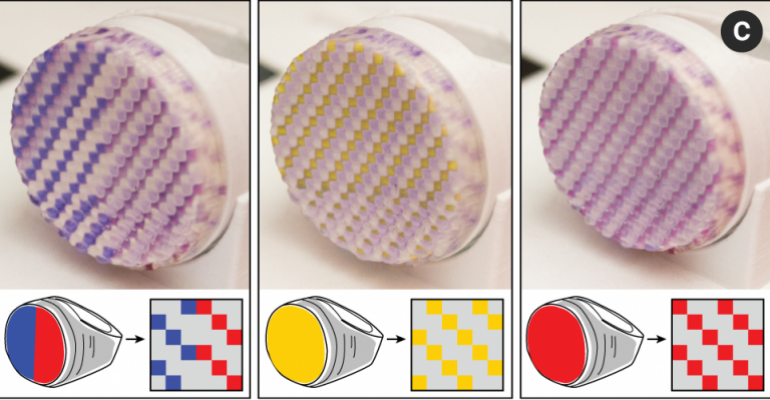 MIT’s CSAIL lab has developed a process called ColorMod, a method for repeatedly changing the colors of 3-D printed objects after fabrication.

While new methods, designs, and options for 3D printing proliferate weekly, most of the breakthroughs apply to objects before they’re printed. Once an object is already printed, changes mandate reprinting. For color changes, at least, that may be about to change. Researchers from MIT’s Computer Science and Artificial Intelligence Laboratory (CSAIL) have developed a process called ColorMod, a method for repeatedly changing the colors of 3-D printed objects after fabrication. The process’ development was presented in a paper authored by Stefanie Mueller, the X-Consortium Career Development Assistant Professor in the departments of Electrical Engineering and Computer Science and Mechanical Engineering, postdoc Parinya Punpongsanon, undergraduate Xin Wen, and researcher David Kim.

While the idea isn’t brand new, processes to change the color of 3D printed objects have previously been limited to two-dimensional designs or single-color objects. The ColorMod method is enabled by 3D printable ink that changes color when exposed to ultraviolet light. While the existing project focuses on plastics, researchers envision that the technology could ultimately be used for fabrics.

The project, according to the team, was inspired by research in photochromic materials that change their appearance from transparent to colored when exposed to light of a certain wavelength. Most photochromic materials transition back to the deactivated state once they’re removed from the light source, but with a certain class of photochromics (P-type), the color persists, and the activated state remains even after the material has been removed from the light source

ColorMod 3D prints using photochromic inks in a dense multicolor pattern (think of a tiny, multicolored checkerboard). When users apply a specific color texture using ColorMod’s user interface, only the voxels with the matching color are activated. To change color, currently activated voxels are deactivated, and voxels of the desired color are activated. To print via the hardware/software process, users upload their 3-D model (or choose one from a database such as Thingiverse), choose their color patterns, then print their object.

The team’s custom ink formula is composed of a base dye, a photo-initiator, and light-adaptable dyes. The light-adaptable or “photochromic” dyes bring out the color in the base dye, and the photo-initiator enables the base dye to harden during printing. The team tested ColorMod on three criteria: recoloring time, precision, and how quickly the color decayed. The process is far from fast: a full recoloring process takes about 23 minutes. However, the team notes that they hope to speed up the process, which is fully reversible, allowing objects to be recolored repeatedly.

Changing the color of the printed objects involved using a projector model, which uses UV light to activate desired colors and visible light to deactivate others. Specifically, the team uses a UV light to change the pixels on an object from transparent to colored, and a regular office projector to turn them from colored to transparent. During the recoloring process, a rotating platform is used to reach voxels on all sides of the object. In consumer applications of the future, end users could theoretically recolor objects using a smart phone with an integrated micro-projector and UV light.

Until those consumer applications arise, however, the changeability could first be of interest to design engineers, Professor Mueller told Design News. “Product designers, who often present physical artifacts in client meetings, could make changes right in the meeting instead of having to wait for a follow-up meeting,” she said.

Once the process can be applied to consumer products and textiles, it could become a compelling prospect for retailers. “Retail stores could customize products for shoppers in real-time,” said Mueller. “For example, enabling people to try on an article of clothing or accessory in an out-of-stock color in a matter of mere minutes.”

Bringing Temp, Electricity, and Pressure into the Mix

For now, there are limitations to the process. Resolution is poor, and there are few photochromic colors commercially available. To achieve the ColorMod process, CSAIL researchers invented their own material formula and described the mixing procedure so other researchers can replicate the process. Once finer resolution is achieved, the process could be used to activate colors closer together on an object: for example, activating blue and red might to create purple.

Professor Mueller told Design News that two future goals are to improve resolution and speed up the time cycle for the color changes. “We’ll have to experiment with the light-projection process to see if different versions enable more fine-grained imprinting onto the object. As a next step, we hope to speed up the printing process by using a more powerful light and potentially adding more light-adaptable dye to the ink,” she said.

The research team’s paper, “ColorMod: Recoloring 3D Printed Objects Using Photochromic Inks,” will be presented at the ACM CHI Conference on Human Factors in Computing Systems in Montreal in April.