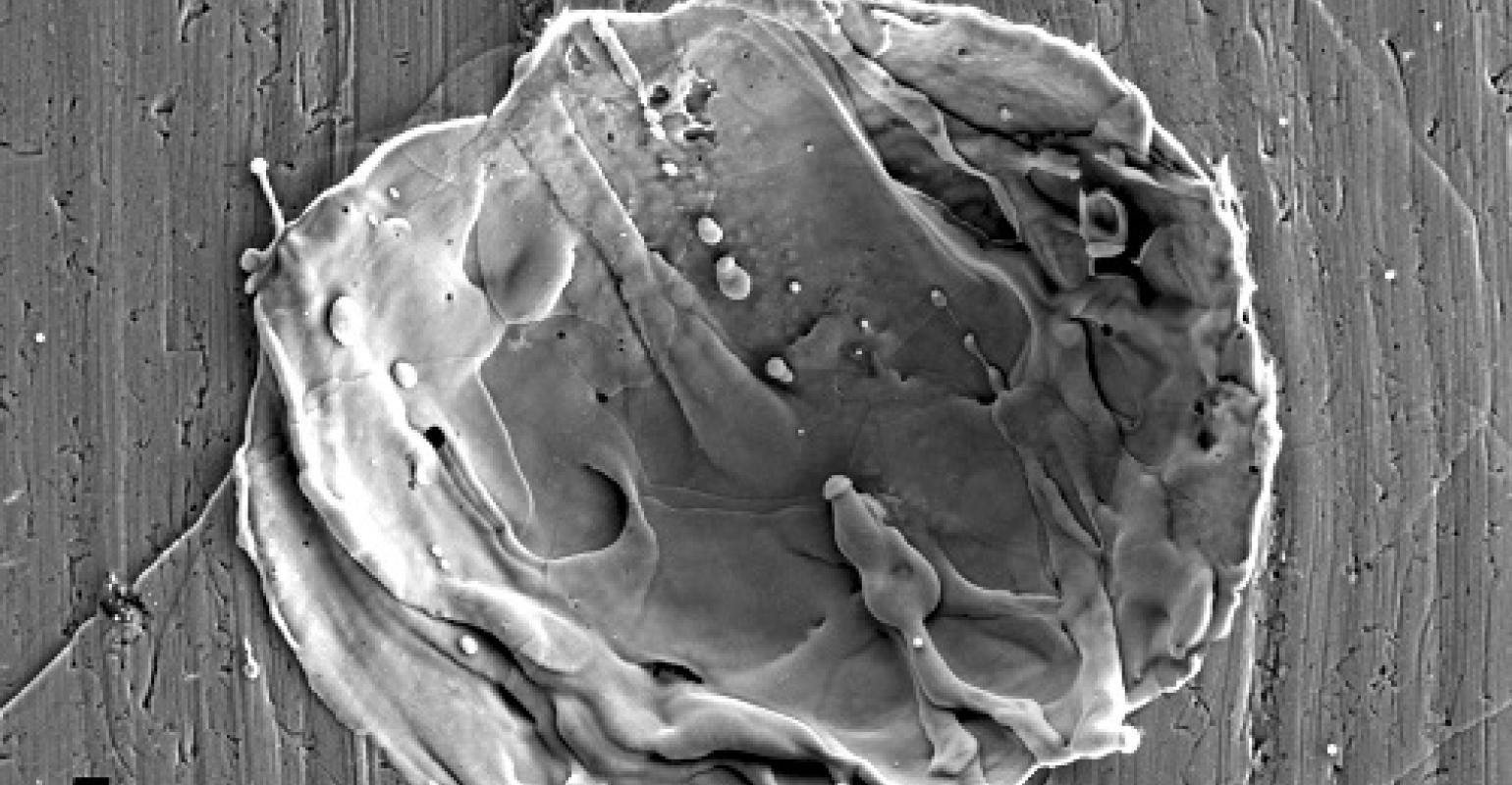 Understanding this could lead to new ways to apply coatings or 3D print using metals.

Since the dawn of metalworking, the conventional wisdom has been that to join metals, there must be localized melting at the two places to be joined. In the case of metal coatings, manufacturers have long relied on a process similar to spray painting to apply metal to surfaces. Despite the ubiquity of the technique, no one was ever quite certain what happened at the particle level when metal coatings were sprayed, as the process is so fast. Understanding this could lead to new ways to apply coatings or 3D print using metals.

Melting is often beneficial for mixing, bonding or joining materials, especially metals and alloys. In many 3-D printing technologies, it’s the localized melting and subsequent solidification that enables designers to make local bonds and build up complicated geometries. Using supersonic impact to create bonding and welding at the micron scale is a relatively recent technology, and it’s still widely believed that localized melting is beneficial in particle impact bonding. New research out of MIT, however, has found that in some cases, melting actually hinders bonding rather than helping.

A team from the MIT Department of Materials Science and Engineering, including post-doctoral researchers Mostafa Hassani-Gangaraj and David Veysset, together with professors Keith Nelson and Christopher Schuh, set out to study the interference between melting and bonding in supersonic particle impact.

“At the beginning, we didn’t know for sure whether melting would be detrimental or beneficial,” Dr. Hassani-Gangaraj told Design News. “Our observations that melting can hinder bonding in some conditions were indeed surprising to us, until we developed a mathematical theory that could explain the reason.”

The team’s research builds upon continued efforts in the area of spray coatings that have been ongoing for the past few decades. However, the experimental design, the diagnostic capabilities, the “cleanliness” of the observations and the conclusion on how melting interferes with bonding are the first of their kind.

To begin, the team needed a way to capture images at speeds great enough to photograph individual sprayed particles. The high-speed imaging platform they assembled (300 million frames per second, or an image every three nanoseconds) uses a commercially available high-speed camera in combination with a microscope. The camera used is a favorite of researchers studying high-speed phenomena such as ballistic impacts, shock interactions, crack propagation or cavitation, which are typically observed at the macroscale. By combining the fast camera with a microscope, the researchers were able to look at the micron scale and observe previously unseen impact behaviors.

“Following the development of a laser-induced microparticle acceleration technique, we needed to observe in real-time the impact event when the post-mortem examination of the sample was insufficient to fully understand what occurred during impact,” said Dr. Hassani-Gangaraj. “This technique was first used to observe the hyperelastic response of an elastomer under supersonic microparticle impact in 2016. The versatility of the method regarding the choice of projectile and target allows us to investigate a wide range of materials response to high strain rate deformation.”

The ultra-fast image capture technique revealed that particles of metal do indeed melt on the surface of what they’re sprayed onto, but can quickly bounce off before the surface has a chance to resolidify. In some cases, efforts to get a better bond were actually hindering the goal. Melting the substrate with increased spray velocity, or extreme preheating of the substrate, were actually achieving the opposite effect and resulting in lower chances of a bond.

“The process of spraying metallic coatings comprises impact and bonding (sticking) of thousands of particles to a support or a substrate, enabling material buildup,” Dr. Hassani-Gangaraj told Design News. “In order to fundamentally study this process, we focused on studying and understanding the unit process here: that is, impact and sticking of one single particle to a substrate. What happened during that process that was surprising was that when the impacting particle had enough energy to melt the substrate, the melting fought against bonding, whereas the expectation was that melting should have facilitated bonding.”

In many cases, the researchers found that the best bonding happened when the impacting particles and impacted surfaces remained in a solid state but jetted outward as a result of impact. The discovery is likely to benefit the process of making structural coatings – coatings that can carry loads and resist failures such as wear, corrosion, and fatigue – as well as repairing and reclaiming damaged components.  Parts that once needed to be recast could instead be cleaned and recoated.

There are also implications for additive manufacturing, which relies on a large number of local bodings, one after another, to build up a part. By understanding both the beneficial and detrimental conditions for successful impact bonding, additive manufacturers will be able to make better parts.

Going forward, the research team has plans to develop melting maps for scientist, engineers, and designers to help them design impacts where they can avoid melting. The researchers’ work has been published in two journals, Physical Review Letters and Scripta Materialia.