Microfluidics Woven into Fibers Have Potential for New Devices 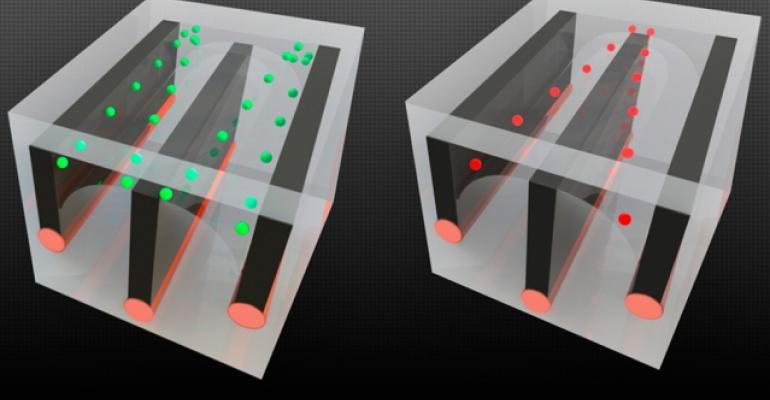 Microfluidics have been woven into fibers by researchers at MIT to allow for more complex medical-testing devices.

Researchers at MIT have incorporated microfluidics into individual fibers, making it possible to process higher volumes of fluid in more complex ways. In doing so, they have enabled diverse new applications—especially for the medical-testing field.

A multidisciplinary team of electrical engineers, materials scientists, and microsystems technologists has discovered a way to solve a challenge with microfluidics devices that could only allow for them to be used on a tiny scale. They therefore extended their range of use, as described in an MIT news release.

Microfluidics devices are very small systems with microscopic channels that can be used for chemical or biomedical testing and research, such as for processing tiny droplets of blood for testing. Typically, these devices are manufactured onto microchip-like structures to provide a way of mixing, separating, and testing fluids in microscopic volumes.

Until now, they haven’t been very useful for procedures that need larger volumes of liquid to detect substances present in minute amounts. However, the work out of MIT changes this, ushering in a new “macro” approach to microfluidics, researchers said in the news release. The work also expands the size and shape in which microfluidic devices can be created, said MIT graduate student Rodger Yuan, one of the main researchers on the project.

Currently, microfluidic devices are limited to the size of the silicon wafers used in such systems, which also limits the shapes of the channels through which the liquid flows. “Over the last 20 years, the majority of microfluidic research has been done in a chip format because microfabrication methods are very good at making high-precision channels in complex arrangements,” Yuan told Design News.

Right now, they can only have square or rectangular cross sections, he said. “Silicon chip technology is really good at making rectangular profiles, but anything beyond that requires really specialized techniques,” Yuan said. “They can make triangles, but only with certain specific angles.”

The new fiber-based method developed by Yuan and his team changes this by allowing for a variety of cross-sectional shapes for the channels to be implemented—including star, cross, or bowtie shapes. Particular applications, such as those that need to automatically sort different types of cells in a biological sample, could find these new shapes quite useful, Yuan said. “Here, we introduce a new way to do microfluidics in a fiber format that offers many advantages over the traditional chip-based format,” he said.

Researchers developed the fibers using an oversized polymer cylinder called a preform. It contains the exact shape and materials desired for the final fiber, but in much larger form. This makes it much easier for researchers to make them in very precise configurations.

Scientists heated the preform and loaded it into a drop tower. There, it was pulled through a nozzle to constrict it to a narrow fiber that’s one-fortieth the diameter of the preform, preserving all internal shapes and arrangements.

What’s unique about the process is that the material also is elongated by a factor of 1,600, researchers said. This means, for instance, that a 100-millimeter-long (4-inch-long) preform becomes a fiber 160 meters long (about 525 feet).  This aspect of the process is what allowed researchers to overcome the length limitations inherent in present microfluidic devices, said Joel Voldman, an MIT professor of electrical engineering who specializes in biological microtechnology.

“Sometimes, you need to process a lot of material because what you’re looking for is rare,” he said. That makes the technology especially appropriate for uses such as detecting microscopic objects that exist in very small concentrations in the fluid—for example, a small number of cancerous cells among millions of normal cells—because “the fibers can be made arbitrarily long,” Voldman explained. The length allows more time for the liquid to remain inside the channel and interact with it, he said. Researchers published a paper on their work in the journal of the Proceedings of the National Academy of Sciences.

The microfluidics devices invented by the MIT team differ from traditional ones in a couple of ways. One is that the channels in them can be made as long as needed, allowing for uninterrupted flow of liquid. Typically, the devices have long channels by looping back and forth on a small chip, with twists and turns that change the profile of the channel and affect the way the liquid flows.

The new device system also allows electrical components, such as conductive wires, to be incorporated into the fiber for uses like manipulating cells with a method called dielectrophoresis. Here, cells are affected differently by an electric field produced between two conductive wires on the sides of the channel.

To test the device, researchers used this method to control the voltage so the forces push and pull on the cells at a high flow rate, Voldman said. In their tests, they sorted dead cells from living ones, proving the device’s efficiency to perform such tasks.

The team plans to continue to develop the device to enhance its capability to perform even more subtle discriminations between cell types, as well as expand its use for other applications, Yuan said.

“First, we are working on further developing the cell separation efficiency, throughput, and selectivity for applications in rare cell separations, such as the isolation of circulating tumor cells from the blood,” he said. “Secondly, we are excited to adapt our fiber-fluidics platform to new fields outside of cell separation, where we envision the unique properties of the fiber microfluidics system will be able to solve problems in a wide range of applications.”

However, researchers said they don’t expect their method to replace current microfluidics strategies, but merely augment them—paving the way for particular uses that have not previously been possible.