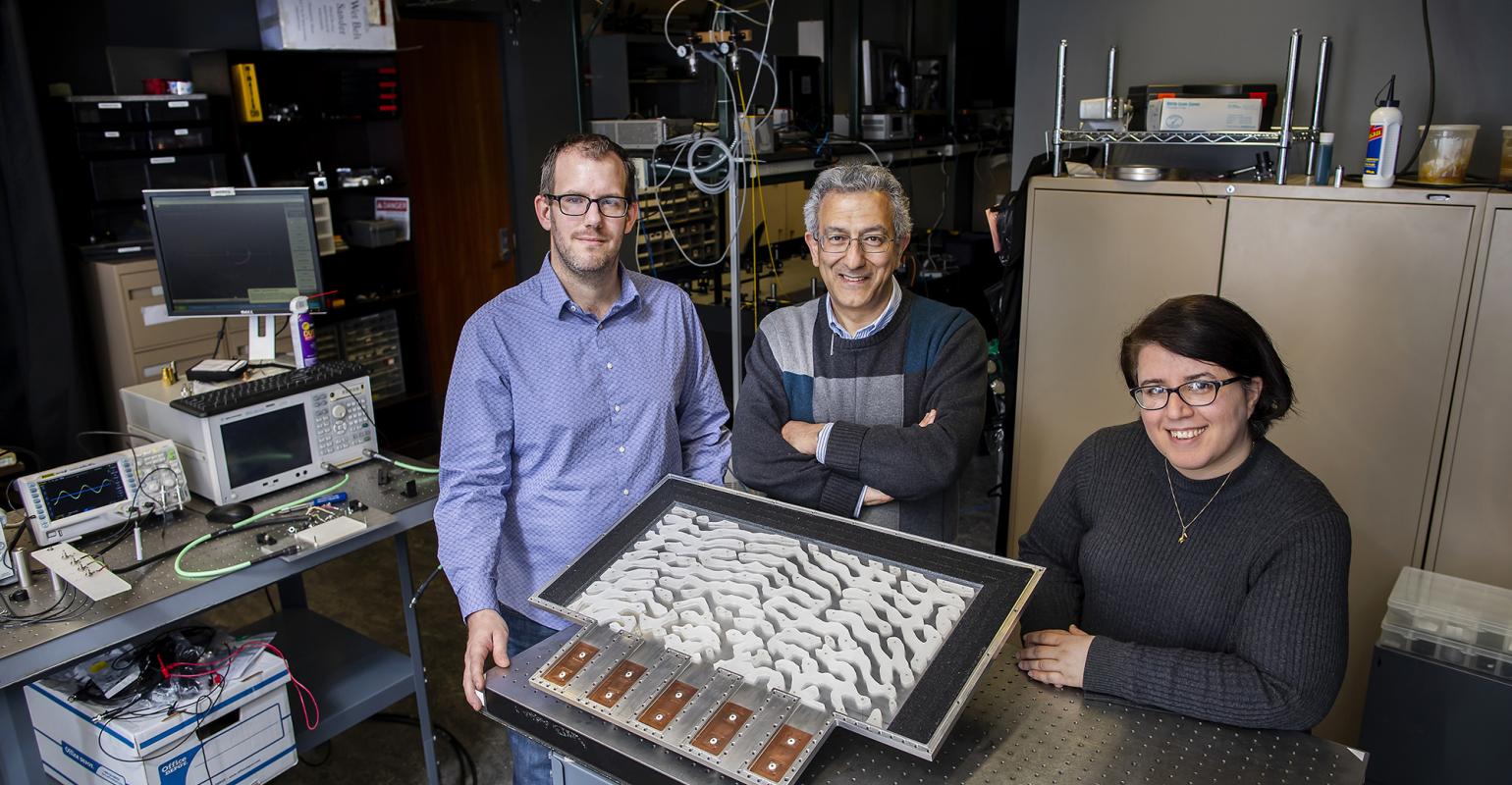 Researchers have developed new metamaterials that can solve equations and integrated them into a device that can be used to speed up next-generation processors and other computing applications.

The field of materials science is evolving toward the development of smart materials that can use external stimuli to manipulate their own shape and performance.

Researchers at the University of Pennsylvania are taking this aim even further with the design of metamaterials that can solve equations and, when incorporated into a device, act as a type of analog computer.

A team led by Nader Engheta—a professor in the Department of Electrical and Systems Engineering at UPenn’s School of Engineering and Applied Science—designed the metamaterials, which have a Swiss-cheese-like metastructure and can do what researchers call “photonic calculus.”

“Our device contains a block of dielectric material that has a very specific distribution of air holes,” Engheta said, alluding to the metastructure that garnered the comparison to Swiss cheese. The material is a type of polystyrene plastic, the intricate shape of which was carved by a CNC milling machine.

Researchers believe a scaled-down version of technology can be used to speed up processing in next-generation microchips as well as in other computing and optical applications.

The metamaterial works like this: A pattern of hollow regions in the Swiss-cheese structure is predetermined to solve an integral equation with a given kernel—or the part of the equation that describes the relationship between two variables. In the scientific field, this general class of such integral equations—known as “Fredholm integral equations of the second kind”—is a common way of describing different physical phenomena in a variety of scientific fields, researchers said.

In this set-up, the pre-set equation can be solved for any arbitrary inputs, which are represented by the phases and magnitudes of the waves that are introduced into the device, Engheta explained.

“For example, if you were trying to plan the acoustics of a concert hall, you could write an integral equation where the inputs represent the sources of the sound, such as the position of speakers or instruments, as well as how loudly they play,” he said. “Other parts of the equation would represent the geometry of the room and the material its walls are made of. Solving that equation would give you the volume at different points in the concert hall.”

The team achieved material with the potential for this type of performance by encoding parameters into the properties of an incoming electromagnetic wave and sending it through a 2-foot-square device they designed, researchers said. Once inside, the device’s unique structure manipulates the wave in such a way that it exits encoded with the solution to a pre-set integral equation for that arbitrary input.

“Controlling the interactions of electromagnetic waves with this Swiss cheese metastructure is the key to solving the equation,” said Nasim Mohammadi Estakhri, another researcher in Engheta’s lab who also worked on the project. “Once the system is properly assembled, what you get out of the system is the solution to an integral equation.” Researchers published a paper on their metamaterials and the device they designed in the journal Science.

In the paper, researchers describe how they conducted their proof-of-concept device using microwaves, the long wavelengths of which allow for an easier-to-construct macro-scale device. However, the principles of the research can be scaled down to light waves, which can fit on a microchip, they said.

This would allow researchers to develop metamaterial devices that can function as analog computers that operate with light instead of electricity, they said. Further, these devices have the potential to solve integral equations—which are common problems in every branch of science and engineering—orders of magnitude faster than their digital counterparts, while using less power, Engheta said.

“Even at this proof-of-concept stage, our device is extremely fast compared to electronics,” he said. “With microwaves, our analysis has shown that a solution can be obtained in hundreds of nanoseconds, and once we take it to optics the speed would be in picoseconds.”