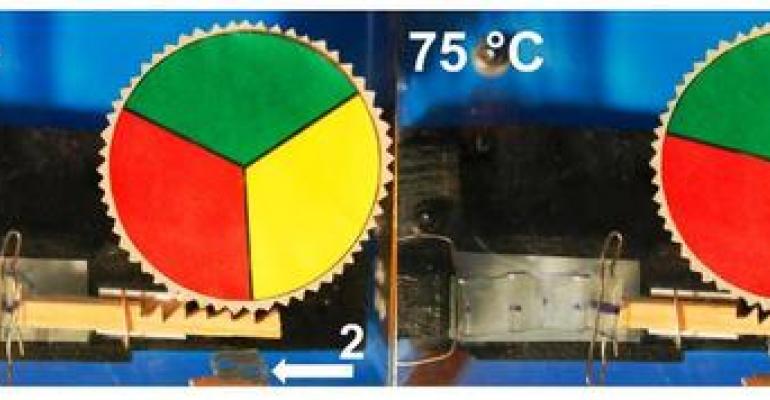 A new material developed by researchers at the German Institute of Biomaterial Science can change its shape and return to the original one 250 times, something new in the world of temperature-controlled shape memory plastics.

The basic definition of shape-memory plastics is that they can be temporarily changed and fixed into another form, then changed back when heated to the material's preset switching temperature. But they're not all created equal. The big questions about a self-healing polymer are usually:

Usually the answers are: "Only once or twice," "not completely," and "a lot."

For example, we've told you about a shape-memory plastic co-developed by the German Federal Institute for Materials Research and Testing (BAM) and Bayer MaterialScience. The Desmopan DP 2795A SMP material, a thermoplastic polyurethane (TPU) produced by Bayer MaterialScience, makes quick response (QR) codes on labels readable only when they're in their permanent, original shape. It may prove useful in product and brand protection. We also told you about a much tougher self-healing hydrogel that can stretch to more than 20 times its original length.

The team, led by Andreas Lendlein, director of the Institute, describes its work in an article in the US journal Proceedings of the National Academy of Sciences (PNAS). The new materials, which the design team calls temperature-memory polymer actuators, can change shape and recover hundreds of times. This is due to the behavior of their structural elements at the molecular level, which affects how they can be programmed. There's a range of possible temperature threshold values and kinds of shape-changes that can be selected. They are based on cross-linked copolymer networks with a broad range of melting temperatures. So far, the researchers say they have achieved more than 250 cycles of thermically controlled actuations "with almost constant performance."

Possible applications are quite broad. One mentioned by the researchers is automatic window blinds that would work without the need for electricity. Instead, their slats could open and close based on the room's temperature. The specific threshold temperatures for opening or closing can be selected by users. Another possible use, which made me think a bit of Rube Goldberg systems, is one the research team built in an experiment. An element of a drive in an engine cools, opens, and moves a gear rack, which in turn drives a wheel. When the same element heats up, it reverses movement, and so does the gear rack. The drive unit's rotational speed can be controlled by specific temperature programming.