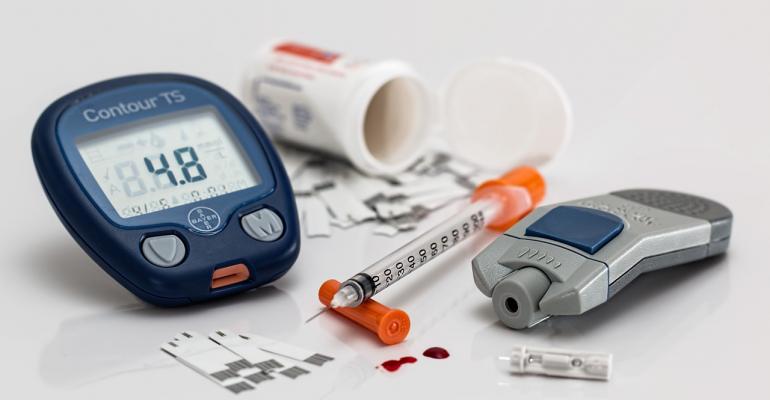 The right adhesive will not fall off early or hurt you when you take it off, but getting to that point means identifying and at times overcoming a range of factors including the patient’s skin, the application, and more.

While November is officially Diabetes Awareness Month, many people are only too aware of diabetes year-round. According to the American Diabetes Association, 30.3 million Americans, or 9.4% of the population, had diabetes in 2015. Given all of the developments in medical devices and treatments, managing diabetes has become somewhat easier and more effective. This is thanks in large part to wearable options like glucose monitors—devices that go on the abdomen or the arm, thanks to adhesives, to provide real-time feedback as needed related to glucose levels. Although these solutions seem simple, however, a lot of research and consideration goes into the adhesives used to stick them to the patient—and keep them there. We spoke to Del Lawson, manager of a 3M laboratory that works the medical technologies business, about the key challenges facing medical adhesives for diabetes in particular.

Lawson explained, “The issue around adhesives is that there are permanent types of adhesives like the Superglues that are out there. The issue with skin is that typically, we want these things to be temporary. They’re not like tattoos or something where you want it to always be there. So we have to balance the desire to have the medical device wearable. And in this case, it might be a continuous glucose monitor that someone with diabetes would wear, which is there when you want it and then, when it’s time to remove that monitor, it comes off without doing any harm to your skin.”

The choice of adhesive obviously depends on the solution and the application. Patients have individual treatment needs. A medical device may only need to be on for a few hours, for example. A device for delivering a drug, like an insulin pumps, may typically be worn for a few days. Glucose monitors are worn for as long as 14 days. The trick is for the device to stay in the same position on the skin but not cause any harm or damage when it’s removed—quite a feat.

To further complicate this issue, everyone’s skin is different based on age, gender, etc. Also, skin changes constantly, but is especially different at various periods in our lives. “First and foremost, there’s the age factor—very sensitive when we’re young and old, fairly tough and resilient when we’re in our middle ages,” Lawson noted. “Then we have what skin is and what its role is, which is primarily as a barrier to keep us from harm from the environment. It keeps moisture in and is our primary defense against bacteria. It helps us control temperature through sweat. We have the sweat glands, hair follicles, bacteria on our skin that normally will do no harm, and the skin changes on a regular basis. We call this the forgotten reptile part of our body because every 14 days, that top layer of skin tends to slough off and get replaced by the epidermis underneath, creating a new layer of cells that rise to the top and then die. This is the brick and mortar that saves us from harm and the environment and things like that.”

According to Lawson, there are three common challenges that arise with medical adhesives as a result of these elements:

This translates into a need to engineer adhesives for multiple types of skin. “For about 95 percent of the population, our standard adhesives work extremely well and hold in place,” Lawson noted. “But we can’t protect against clothing pulls, etc., so one of the things we’ve engineered over the years is an extension around the device—we call it a ‘skirt’—that gives 5 or 6 mm excess adhesive and the backing that sticks out beyond the edge. This helps to alleviate the lift that can occur. The skirts tend to be the insurance against creating that first little bit of lift that then sort of continues and eventually leads to the device falling off.”

For a small number of patients, their skin—be it oily, dry, or having some other characteristics—simply won’t take as well to the adhesive. Lawson said, “We’re still trying to understand the 5% of the population that we call ‘low stickers.’ In future studies, we’ll try to figure out how to manage those outliers and better determine and identify the root cause. This doesn’t mean that they won’t stick for more than a few days; it just means they don’t hit the target wear time. Say they want 10 days. For low stickers, it may fall off after six or seven days, so they never quite hit the target. Solutions include wearing a strap over it or cover tape over it.”

“There’s a medical condition called MARSI (medical adhesive-related skin injury) and there’s six or seven types of injury that can result from improper usage of an adhesive,” Lawson explained. “You can tear the skin, you can strip off the top layer of skin, you can trap moisture and have something called maceration, you can get an allergic reaction, you can get folliculitis, which is an irritation of the hair, or dermatitis, which is another form of irritation. In all of those cases, what we try to do to avoid those is make sure the right adhesive aggressiveness is used for the type of skin you have and the amount of time you want to wear it. We do a lot of work around biocompatibility and cytotoxicity as well, where we take the chemicals that are used, extract them, do testing to make sure that those materials do not cause allergic reactions or have any toxicity associated with them that would cause a problem when they’re used—especially for extended use, where the body is in contact with them for long periods of time.”

Our skin is dynamic in terms of whether it is dry or moist. Just think of how the body will sweat with exercise or when the body needs to cool down. When the sweat evaporates, it cools the body. Lawson noted, “If we intervene in the wrong way by putting something on the skin that traps that moisture, then in the normal evaporation process, which takes place when we sweat, that moisture gets trapped against the skin. You get that bathtub effect of having been in the bathtub for too long. Normally, when you get out of the bath, it takes half an hour and your skin returns to normal. If you’re wearing a tape of some sort that traps that moisture for an extended period of time—days on end—that skin can become sensitized to the point that an actual injury occurs. For extended wear devices—glucose monitors and things like them, which stay on for many days—we’re trying to manage moisture. We work very hard to make sure that the adhesive itself has the ability to wick moisture and the backings that we use are not just traditional low-moisture vapor transmission material that could trap that moisture. Moisture management is this other secret component to make sure that we do no harm and we don’t create those MARSI-type events.”

Obviously, all of these variables mean that there’s no silver bullet adhesive that will work across different people and stay on for three hours or three weeks. Among the products that 3M provides to customers are traditional acrylate-based adhesives, which work well for many different applications. For their part, silicone-based adhesives avoid sticking to the protein layer so that when you remove the adhesive, it does not take off that top layer of skin. “With sensitive skin,” Lawson noted, “that top layer of skin may be what stands between you and the epidermis underneath, which can cause an injury or a skin tear, which can take some time to heal or be a source of infection. So silicones are again parts of our ammunition that we can throw at these types of applications for the very young or the very old. Or, if you’re in a sensitive location where an injury is more prone to occur.”

To share its legacy knowledge in the medical adhesive space, 3M has raised its efforts to have scientists do skin presentations and produce publications sharing 3M’s knowledge of adhesives for the people and engineers working on medical devices. The company also put together a web site called findmyadhesive.com, which allows people who are not experts in adhesives to answer a few simple questions and get some guidance as to what sort of adhesive would work best, depending on the application.

What the Future Holds

Development is of course ongoing to further improve adhesives. Lawson said, “We’re trying to engineer silicones to be able to go into that extended-wear (beyond seven days) category. That will be something coming out in the next year—the ability to stick aggressively, not be prone to skin tearing, and able to be used for adolescent, juvenile, and senior populations. While I said there’s no silver bullet, we’re pretty excited about the possibility of silicones being in that range where you could wear them for longer periods of time, avoid injury on sensitive skin, and the people with normal skin may be able to wear them as well and get the performance they desire.”

Lawson also noted the dream for the diabetes world to eventually be able to provide treatment via a kind of artificial pancreas—a measurement device and a pump all self-contained in a small, easy to use device that measures the glucose and can deliver small quantities of insulin to maintain the glucose level in the blood. Adhesives will play a crucial part in holding that device in place.

In addition, Lawson stated, “I think about psycho-social issues associated with diabetes or any chronic condition where you’re wearing something that advertises that you have a condition. For some people, they may not care. But for younger people or those with different personality types, it can be a traumatic sort of thing. I hope at some point, adhesives combined with the overall device design can make it almost invisible to the wearer to place and forget or for it to be private or camouflaged if you don’t want it to be known that you have this chronic condition.”

Nancy Friedrich is Editor-in-Chief of Design News. With a 20-year background in covering the electronic and mechanical engineering segments, Nancy has expertise across many areas. At Design News, she focuses on wireless and related areas.