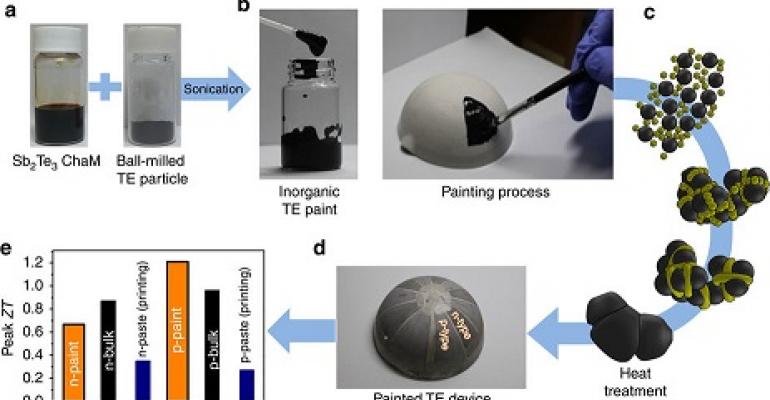 Jae Sung Son, a professor in the Materials Science and Engineering department at the Ulsan National Institute of Science and Technology (UNIST), led the research to develop these high-performance, liquid-like TE materials that are shape-engineerable and geometrically compatible so that they can be directly brush-painted on almost any surface.

The TE effect is the direct conversion of temperature differences to electric voltage and vice versa. It’s used for both heating and cooling in temperature-control systems for vehicles and other applications. 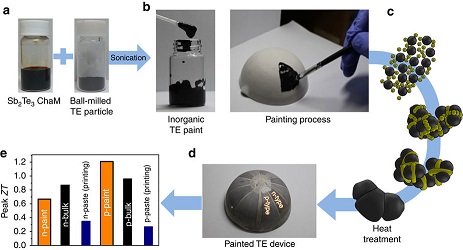 TE generators exist, but their output power depends on minimizing heat loss, as well as inherent material properties in the device, researchers said. Liquid-like TE materials also exist, but they haven’t been used much because of the limited flat or angular shape of TE generators, which don’t lend themselves to dissipating heat, they said.

However, a considerable amount of heat loss is inevitable in a curved surface, leading the team to develop a shape-engineerable TE painting technique in which they directly brush TE paints onto the surface of heat sources to produce electricity.

“Our thermoelectric material can be applied any heat source regardless of its shape, type, and size.” Son said. “It will place itself as a new type of new and renewable energy generating system.”

Indeed, the material developed by his team potentially can be painted onto the exterior surfaces of buildings, roofs, cars, and devices to generate electricity that can then be transferred to other applications.
Son and his team outlined their work in a paper in the journal Nature Communications.

In experiments, the team fabricated TE generators by painting the TE paint material onto flat, curved, and large-sized hemispherical substrates. By doing so, they demonstrated that it is the most effective means of heat-energy collection from any heat sources, with a high output power density of 4.0 megaWatts per square centimeter. This is on par with the top energy generation of other printed TE generators, Son said.

The cost from manufacturing systems also can be reduced by using the material, which can conserve materials and simplify industrial processes, Son added.