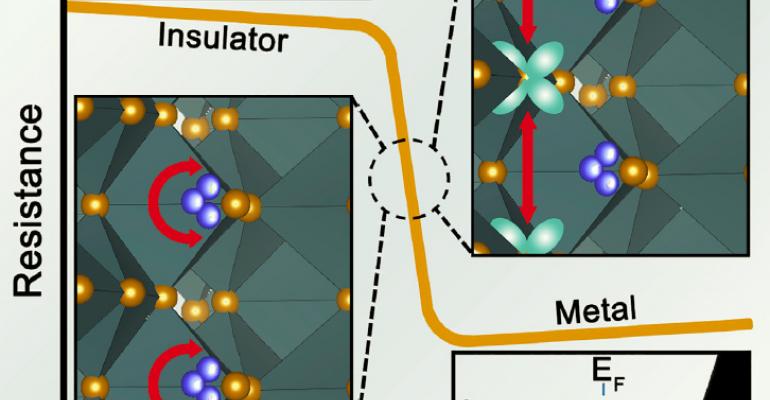 Researchers have discovered a new material that can mimic the same neural signals that transmit information in the human brain, paving the way for sophisticated computing-processing systems that can work in a similar way.

Key to the material is its tunable electronic instabilities, which can allow for what’s called neuromorphic computing—or computing that replicates the brain’s capabilities and efficiencies. This is the type of processing that is needed to achieve the vision for the future of device connectivity, including the Internet of Things (IoT), as well as for other next-generation computing technologies such as processing and artificial intelligence.

Materials that mimic the brain’s info-processing functions outside of the human body already exist in nature; however, the most efficient of these have yet to be discovered and repurposed for neuromorphic computing, something the team hopes to change.

“The importance of this work is to show that chemists can rationally design and create electrically active materials with significantly improved neuromorphic properties,” he said in a press statement. “As we understand more, our materials will improve significantly, thus providing a new path to the continual technological advancement of our computing abilities.”

Two key aspects of the material that emulate neurological transmissions are that it can reversibly change between being a conductor and an insulator, and also can change with temperature or an applied electrical stimulus.

These so-called “instabilities” in a solid-state material is what is needed to “store information in their internal state and in the timing of electronic events,” Banerjee said in a press statement.

“By thoroughly characterizing this material, we have also provided information that will instruct the future design of neuromorphic materials, which may offer a way to change the nature of machine computation from simple arithmetic to brain-like intelligence while dramatically increasing both the throughput and energy efficiency of processors,” he said.

To identify the material’s usefulness for this purpose, the team narrowed its focus to the movement of copper ions in the material, which in turn is key to moving electrons around in to create neuron-like functions.

Indeed, the movement of the copper ions is what forms an electrical conductivity change that can be leveraged by the material to create electrical spikes similar to how neurons function in the cerebral nervous system, said Joseph Handy, one of the graduate students who also worked on the research.

“Because of this movement of copper ions, the material transforms from insulating to conducting in response to external changes in temperature, applied voltage or applied current,” he said in a press statement. “In other words, applying a small electrical pulse allows us to transform the material and save information inside it as it works in a circuit, much like how neurons function in the brain.”

The team plans to continue its research by tackling challenges to tweak material characteristics, such as transition temperature and switching speed, to work efficiently with the magnitude of the change in electrical resistance. This tuning is needed for the material to function optimally for neuromorphic computer.

Ultimately, researchers hope their discovery will prove useful in the design of future neuromorphic computing materials and the advancement of these technologies in commercial and scientific use.