Lighter, thinner substrate materials including plastics and composites are being joined more often, in more industries, and in a wider variety of product assemblies. Although adhesives have traditionally been used for joining many types of plastics, suppliers are coming up with new fastening systems, or improving existing ones, to accommodate engineers' lighter, thinner, and often smaller designs.

Adhesives or other types of chemical fastening won't work for a design if it needs one or more mechanical fixing points, said Matthew Stevens, managing director of UK-based bigHead Bonding Fasteners. An example of one design that does need fixing points is a carbon fiber car chassis. "In that case, you also need an additional fixing point like a nut or something else bolted on to the head," he said. "That's what our bigHead fastener enables: it's a fixing welded to a head. We're actually finding that adhesive companies are coming to us because they know their customers need fasteners, specifically bonding fasteners." 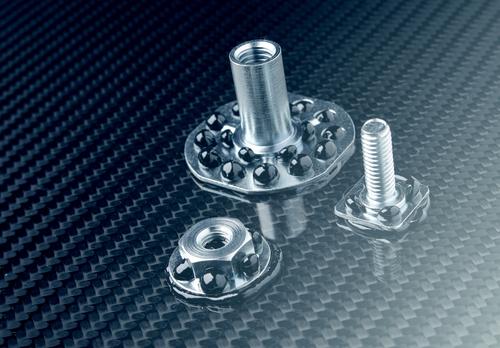 With bonding fasteners, fixing is done with a specialist adhesive, placed either on the fastener or on the material's surface. When surface bonding materials like thin composites using bigHead's design shown here -- a fixing welded to a head -- adhesive flows through the holes, locking into position after cure. These fasteners are used extensively in cars from interior trim to carbon fiber body panels.
(Source: bigHead Bonding Fasteners)

bigHead has been making its design of bonding fasteners, including the holes in their heads, for 50 years, said Stevens. In cars, they're used for everything from interior trim to carbon fiber body panels. Generally, this type of fastener doesn't necessarily have holes: the basic principle of bonding fasteners is that fixing is done with adhesives, placed either on the fastener or on the material's surface. "In surface bonding with our design the adhesive flows through the holes and then locks into position when it cures," he said.

Composites, in particular carbon fiber composites, are growing in several areas, especially in car designs, said Stevens. "What's new, and a major trend, is the application of composites to new industries," he said. "Automotive is, in some sense, new, certainly newer than aerospace. Technologies in the supercar segment, like carbon fiber, are starting to migrate into luxury and sports cars, so volumes are going up. That puts pressure on manufacturers to reduce cycle time. As that happens, manufacturers want to move away from manual processes to higher-volume automated processes. So when it comes to joining, they won't accept the long cure times of liquid adhesives, which can be up to a few hours. Those times might be OK when you're making 500 cars a year, but not for 5,000 cars a year."

With composites, bigHead fasteners can be used two ways. For thin ones, surface bonding is done. The result is no hole, no drilling, and no damage to the substrate material. Tensile and torsion loading can be controlled by the choice of bonding fastener plus adhesive. In higher-volume applications, such as automotive, the adhesive must cure much faster, and may be applied with a robot. "So there's a lot of activity in how we can speed up that bonding process and make it more efficient, more lean," said Stevens. "We're working with adhesive companies to improve bonding, to find smarter, faster, and quicker ways for that bonding."


For thicker composites, bigHead fasteners can be embedded in the material, by integrating them within the composite molding tool. This faster process produces a part ready for assembly, and can save up to 66% of fastener weight compared to traditional bolts.
(Source: bigHead Bonding Fasteners)

For thicker composites, bigHead fasteners can be embedded in the material, integrated within the composite molding tool. "You place the bigHead in the mold tool, close the tool, infuse everything, open the tool, and the part comes out with an embedded bigHead in it," said Stevens. "It's all part of the same molding process." Besides a faster process without the need for secondary fastener installation, producing a part that's ready for assembly, embedding the fastener can also save up to 66% of fastener weight compared to using traditional bolts. This solution has proved attractive to suppliers for the automotive industry, said Stevens.

In the US, although the largest end-user market for industrial mechanical fasteners has traditionally been motor vehicle production, the fastest growth in fastener sales through 2020 will be found in construction, according to a new study by The Freedonia Group. During the same period, Freedonia analysts expect demand for aerospace-grade fasteners to outpace demand for standard fasteners. Standard industrial fasteners used in fabricated metal products will also experience above-average gains. Fasteners used in automotive assemblies, as well as those used for machinery, will experience more moderate growth. The overall US market for industrial fasteners is expected to increase 2.6% per year, reaching $15.2 billion in 2020.