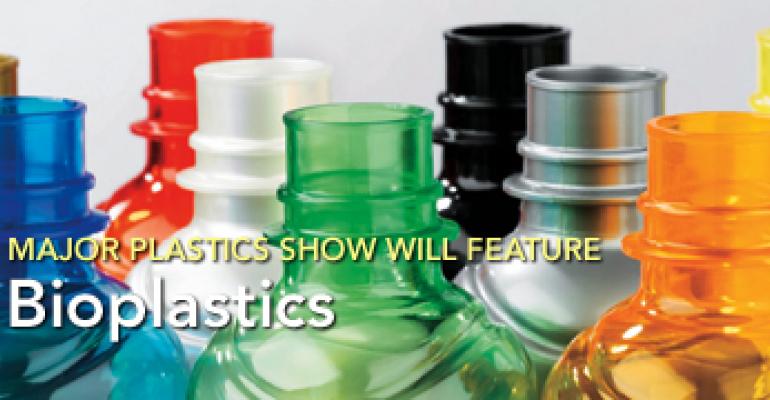 One of the hot technologies at this year's National Plastics Exposition (NPE) in Chicago (June 22-26) will be plastics made from plants, often called bioplastics.

Pick your plant: corn, castor beans, soybeans, potatoes or tapioca. They'll all be there in one form or another. Three raw material companies will report on new ventures for manufacturing bioplastics. And another 39 companies, agencies and industry consortia will make conference presentations on bioplastics technology and business strategy.

On the NPE show floor, there will be 16 booths featuring bioplastics. Other exhibitors, such as PolyOne, will introduce additives, compounds and processing equipment designed specifically for these new types of polymers.

"The dawn of the era of sustainability has brought with it a worldwide industry consensus on the need to proactively address issues such as resource depletion," says William R. Carteaux, CEO of the Society of the Plastics Industry, which runs the NPE. "Bioplastics have emerged as one of the most promising means for companies to carry out this strategy while operating profitably."

No one is predicting any imminent replacement of hydrocarbon-based plastics with those derived from plants. In fact, interest in bioplastics probably was greater a year ago when high oil prices pushed plastics prices to sky-high levels.

The price gap between bioplastics and oil-based plastics is quite high right now. The premium probably is in the neighborhood of three- to five-fold in many cases.

Melissa Hockstad, SPI vice president in charge of the Material Suppliers Council and the Bioplastics Council, cited three examples of bioplastics technology at the NPE:

The 39 conference presentations concerning bioplastics will take place in four educational programs co-located with NPE2009. These will include ten presentations in the "Business of Plastics" conference (produced by SPI) and 26 in the ANTEC 2009 technical conference held by the Society of Plastics Engineers.

Bioplastics will be one of four technologies to be the focus of exhibits in the Emerging Technologies Pavilion, with DuPont as the major pavilion sponsor and Dow Chemical as sponsor of a sector on sustainability.

Some commercial applications of bioplastics are sure to be among the entries in the first International Plastics Design Competition at NPE2009 sponsored by Design News.

"At the last NPE in 2006, bioplastics were still something of a curiosity, but at NPE2009 literally dozens of organizations will have something important about bioplastics to say or demonstrate," Hockstad says. "There will be implications for every major plastics market, from appliances and automotive, to electronics and medical, to sporting goods and packaging."