HomeMaterialsLight Used to Speed Up 3D Printing of Plastic 100 Times
Recent
Materials
Mercedes-Benz Sustaineer Concept Electric Van Scrubs the Air While it Drives
Oct 28, 2021
Spooky Halloween Tech Is Here. Just Look at These Doozies
Oct 27, 2021
Halloween? What a Perfect Time to Think About Generating Electricity From Blood!
Oct 27, 2021
Ghosts of Medtech: What Ever Happened to These 7 Medical Devices?
Oct 27, 2021
POLL
How to Survive a Zombie Apocalypse
Oct 27, 2021
America's Supply Chain Crisis by the Numbers
Oct 27, 2021
Want Scary Stuff for Halloween? Check out the Tech for 2021
Oct 27, 2021
How Apple Influenced Medical Packaging
Oct 27, 2021

Light Used to Speed Up 3D Printing of Plastic 100 Times 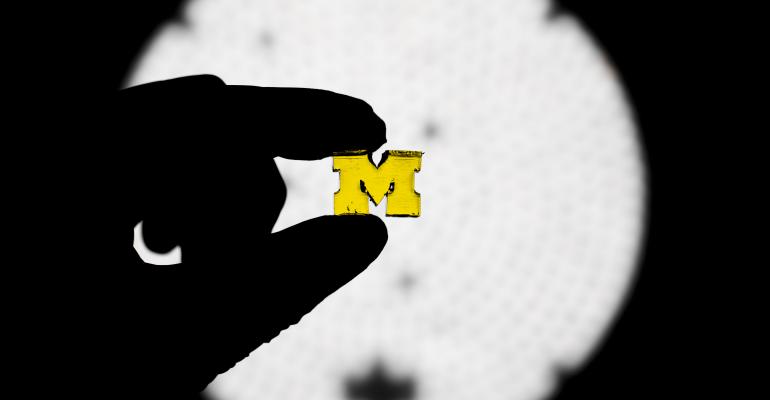 Researchers have developed a light-driven 3D-printing method that speeds up printing 100 times, making it more viable for smaller manufacturing jobs with shorter deadlines.

While 3D printing is being used more and more in the production of plastic parts, it’s still not economically feasible in small manufacturing jobs that need fast turnaround times. To solve this problem, researchers have developed a new light-driven method for 3D printing with plastic that is 100 times faster than typical methods, they said in a UM news release.

A team at the University of Michigan (U-M) has discovered that instead of building up plastic filaments layer by layer, they can use lights to fabricate complex shapes from a vat of liquid to speed up the process significantly. This could allow for manufacturers to use 3D printing on parts with typical production timelines of a week or two, researchers said.

“Using conventional approaches, that’s not really attainable unless you have hundreds of machines,” said Timothy Scott, an associate professor of chemical engineering at the university, who co-led the development of the new 3D printing approach with his colleague Mark Burns, a professor of engineering.

Now the Scott, Burns, and their team have made it possible with far less hardware with a method in which they solidified the liquid resin using two lights to control where the resin hardens and where it stays fluid. This technique enabled the researchers to solidify the resin in more sophisticated patterns at a faster speed than previously achieved.

For instance, researchers said they can make a 3D bas-relief in a single shot rather than in a series of 1D lines or 2D cross-sections, which is typically how it’s done. To demonstrate their work, they printed a lattice, a toy boat, and a block letter “M.”

“It’s one of the first true 3D printers ever made,” Burns said of the machine the team developed to use the process, the goal of which was to solve limitations they ran into with earlier, vat-printing efforts. Specifically, researchers found that the resin tends to solidify on the window that the light shines through, stopping the print job just as it gets started.

They solved this particular issue by creating a relatively large region where no solidification occurs, so thicker resins—potentially with strengthening powder additives—can be used to produce more durable objects.

The method the U-M team developed also improves the structural integrity of filament 3D printing, the objects of which typically are weak at the interfaces between layers. “You can get much tougher, much more wear-resistant materials,” Scott said. Researchers published a paper on their work in the journal Science Advances.

The team had devised a previous solution to the problem of resin solidifying on the window where the light shines through by using a window that lets less oxygen through. This halted the solidification near the window and left a film of fluid that allowed the newly printed surface to be pulled away. However, it didn’t leave a gap between the object and the window large enough to print more complex objects, researchers found.

The new process replaces the oxygen with a second light to halt solidification, allowing for a much larger gap that is millimeters thick, which allows resin to flow in thousands of times faster, researchers said.

U-M has filed three patent applications for the approach the team designed, and Scott is preparing to launch a startup company to further its development, he said.