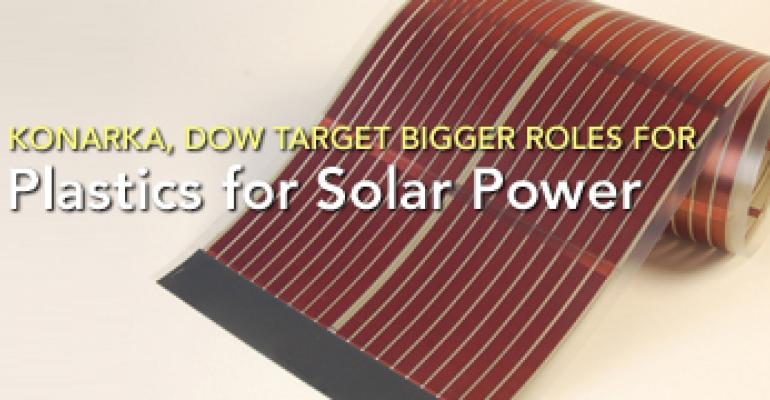 Third-generation solar technologies use advanced materials, including conductive plastic, to achieve acceptable efficiencies and design capabilities not possible with silicon.

Two of the cornerstone programs in the federal Solar America Initiative (SAI) are building-integrated organic photovoltaic technologies being developed by Konarka, of Lowell, MA and Dow Chemical of Midland, MI. Electricity from the grid costs abut 8 cents per kWh now. Power from currently available solar technology is triple that. The SAI wants its projects to deliver grid power for less than 10 cents per kWh by 2015.

One novel but pricey application is a sun umbrella fitted with flexible solar panels that provide electricity on the spot for laptop computers, cell phones or other consumer applications. They're already being used on outdoor patios of coffee shops in sunny locations and on patios near swimming pools.

"These first units are selling for $10,000," says Joe McKenna, executive vice president of SkyShades of Longwood, FL. "I hope to drive the price down to $7,500-$8,000 as volume increases; the first few are always a bit more expensive. Our umbrella units on their own sell for $5,200 as they are a structure and must be anchored to a suitable foundation."

The electricity in the flexible solar panels comes from Power Plastic, a patented and highly secretive material. A review of Konarka patents shows that much of its work has focused on conjugated polymers that behave as metallic conductors and semiconductors. The polymers include at least the following: polythiophenes, polyalkylthiophene, polydihexylterthiophene (PDHTT), polythienylene vinylenes and polyfluorene derivatives.

Photovoltaic cells are produced using continuous web manufacturing techniques in which a polymeric system is applied in a tree-like geometry to a substrate and subsequently in a roll-to-roll type manufacturing process. The substrate is any plastic that can be metalized in a web process. One preferred material is polyester. Other candidates include polycarbonate, acrylic and polystyrene. Efficiency can be improved through application of a  coating that will prevent the reflection of certain types of light. Some producers also further enhance performance through doping with conductive materials. The photovoltaic cells can also be applied through other printing systems.

Konarka's material is two-thirds less expensive than traditional silicon-based solar materials. It's also very light â€“ only one to two ounces per square foot. Konarka recently announced a new strategic collaboration with Total, a major oil company based in Paris. Total is investing $45 million in Konarka, becoming its biggest shareholder. Total clearly sees some synergies with its businesses, which include Cook Composites and Polymers, which develops printing inks as well as other compounds.

The current demonstrated efficiency of the system is 6 percent â€“ good but not really good enough. Typical silicon-based solar systems have efficiencies of around 15 percent. Konarka says its electrical output will cost less than 10 cents per kWh, making its material ideal for widespread use as a building-integrated photovoltaic.

As previously reported by Design News, another major player in this technology arena is Plextronics, a Pittsburgh-based spinoff from Carnegie Mellon University that opened its first manufacturing development line in January.

The small-scale manufacturing facility will print solar demonstration modules with printable solar inks made from conductive polymers, such as those used by Konarka. The modular design of the line will also permit the company to evaluate new processes that will maximize the performance of those inks.

"This line is focused on stimulating broad market commercialization of our innovative ink systems," says Andy Hannah, Plextronics' President and CEO. "Sometimes, especially in an emerging market like printed electronics, a company must be willing to take the initial steps to demonstrate to the marketplace what's possible with new technology."

Another major player is Dow Chemical, which is receiving $20 million from the Solar America Initiative Pathways Program conducted by the U.S. Department of Energy.

Current silicon-based solar cells are packaged within heavy glass panels on rooftops. They are expensive, hard to install and produce electricity that is significantly more expensive than electricity sold over the grid.

"Dow's innovative technology is based on a much more cost-effective photovoltaic material called CIGS and these cells are â€˜packaged' within the roofing product creating a â€˜solar shingle,'" says Bob Cleereman, Sow's senior technical director of building-integrated photovoltaic technology.

CIGS, which is composed of copper, indium, gallium and selenium, is used as light absorber material for thin-film solar cells. More than two dozen companies are working with CIGS technology, and some are struggling to achieve workable efficiency levels.
Dow's original partner in the SAI project was a California-based company called Miasloe, which at one time had been a leader in CIGS development.  But the company missed key objectives and was replaced in the SAI project last year with Global Solar Energy, which last year opened a CIGS factory in Arizona. The company expects to produce 20 megawatts of the film at the plant this year.

"We are collaborating with Global Solar Energy because throughout our search for a solar material provider, it was the only company able to supply a qualifying flexible CIGS material that meets our needs and the requirements of the SAI," said Dow's Cleereman. "Copper Indium Gallium diSelenide has proven to be the most efficient, cost-effective thin-film technology for building-integrated photovoltaic applications."

Global Solar is the only company in full-scale production of CIGS cells on flexible substrates and has achieved a record-setting average 10-percent solar cell efficiency, a requirement for the SAI program. The goal of the SAI is to create solar electricity cost effectiveness with grid electricity within six years.

Dow would not discuss specifics of its technology, but the giant injection molding machine is a big clue. Dow may try to integrate the solar panels into a molded plastic structure, just the way a label is molded into a dashboard inside a mold cavity. It's an exciting idea if the solar material can be web-fed into the tool. That creates very high-volume production economics.

It's not clear what thermoplastic materials may provide the structure for the "molded-in" solar panel. One candidate is thermoplastic olefin, which is a major material in the roofing business (Stevens Roofing Systems and Geomembrane Systems) that Dow acquired last year. Although Dow has been trying to reduce its profile in volume thermoplastics, it remains a major producer of TPO, which is also widely used in automotive applications.

The Konarka project is very interesting as a leading edge technology, but the Dow project has the promise to be a major game-changer in the not-too distant future.