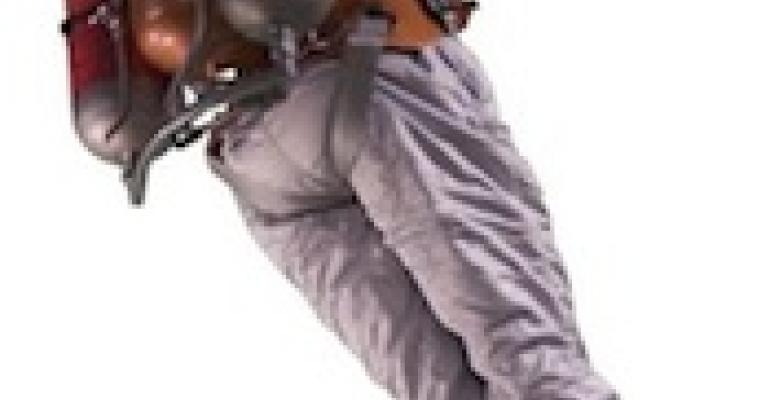 Agent 007 James Bond has nothing on German engineering student Mario Bohme, who developed a portable jetpack as a fun project.

A rocket drive buckled to the back of a pilot provides thrust for a lift off-at least in theory.

What's particularly interesting about his design is the use of plastic bearings in the overall construction, including in the control handles and in the system that bears the pilot's weight.

"I considered other materials, but the plastic bearings had the lowest weight and will show less failure based on corrosion processes," says Bohme. The propulsion reaction generates corrosive gases that are more damaging to metal than the specially developed plastic compound used in the bearings.

A plastic rod end bearing holds the whole rocket assembly together and covers the pilot's weight. "If this bearing fails, the rocket assembly will separate from the pilot - the pilot will fall down," says Bohme. "So it must be proven that the bearing can cover the stress during the flight. For safety reasons the bearing will be replaced after a couple of flights."

The temperature for the bearings in the jetpack will not exceed 40C (104F), according to Bohme.

"The whole project was planned, designed and built by just one person - me," says Bohme. "Some parts were bought as off the shelf parts, but this was just a handful. The other parts were designed and calculated by myself with the latest CAD technology I could use at my university."

Bohme worked on the project for more than five years without any sponsors. "Now I'm looking for sponsors to get enough money to get the jetpack into the sky and improve my personal handling of the flying system. The fuel is the most expensive part at this stage," says Bohme.

The project was recognized as part of the manus 2011 awards program held by igus GmbH. Igus developed the manus program to showcase innovative uses of plastic bearings.

All of the igus technology is in house and very proprietary - even the identity of base polymers and particularly the compounds and compounding methods. It is known from company literature that polymer families used include polyamide 6, 66 and PEEK (polyetheretherketone). Reinforcements include glass and carbon fiber, as well as a newly developed nanomaterial.

A 2011 winner in the Design News Golden Mousetrap competition is an advanced tribological polymer from igus using nano-sized particles. Use of nanotechnology improves the lifetime of its high-performance plastic plain bearing predecessors by a factor of six, according to igus.

The company manufactures its own tooling and operates several hundred molding machines at its home base in Cologne, Germany. These molding machines make parts used for products assembled in Germany, East Providence, RI and elsewhere and are shipped globally.

"The biggest battle we still have is convincing engineers that plastics can do a better job than steel as bearings," bearings unit manager Tom Miller commented in an interview with Design News at the company's Rhode Island location. "One thing we run into is an engineer who says 'We tried plastics 10 years ago and it didn't do the job.'"

As in all technical applications - and particularly for bearings - it's critical to make sure you have the right plastic formulation and that the parts are stress-free and made to the correct tolerances. Miller says that a lot of molders are selling plastic bearings that aren't up to snuff.

One of the big benefits of igus plastic bearings is that they run dry - no external lubricants are required. That makes them good candidates for machinery used to process food or pharmaceuticals. Also, according to Miller, no maintenance is required. They also operate much quieter than metal bearings. And as Mario Bohme found, they are much lighter than metal bearings and the right compounds offer good chemical resistance.

Bearings made from PEEK compounds can take thermal conditions up to 600C (482F).

Miller says, however, that plastic bearings are not recommended for continuous heat, including applications such as fans.