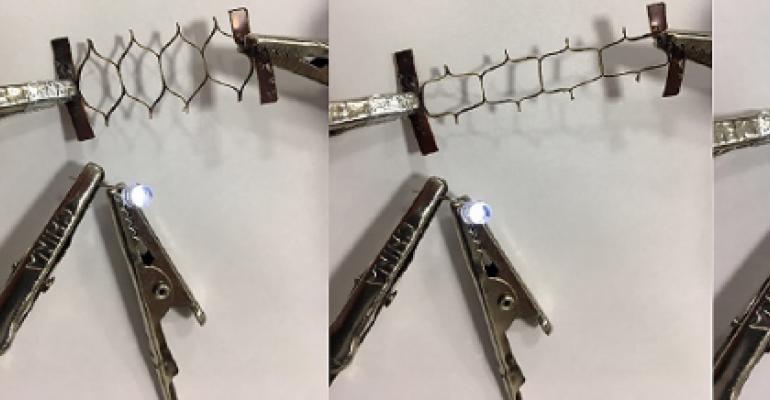 Researchers have already found inspiration in the Japanese paper-folding art origami to design a bio-battery and a solar panel that could be used in space.

Now a team from the University of Buffalo (UB) has used the design principles behind kirigami—a variation of origami—to develop circuits that can bend for flexible electronic applications. The team recently published a study about their work in the journal Advanced Materials.

Like origami, kirigami includes folding paper but also allows for cutting it as well to create symmetrical shapes.

A research team led by Shenqiang Ren, professor in the Department of Mechanical and Aerospace Engineering at the university, has emulated this technique to create tiny sheets of strong, yet bendable, electronic circuits made of a combination of select polymers and nanowires.

Ren told Design News these are the type of materials that the next generation of wearable and other electronics will require rather than the stiff, non-malleable metal structures used today for components. “Traditional electronics, like the printed circuit boards in tablets and other electronic devices, are rigid,” Ren explained. “That’s not a good match for the human body, which is full of bends and curves, especially when we are moving.”

The team found that kirigami could be applied to developing electronic components to suit the changing needs of electronics. “We examined the design principles behind kirigami, which is an efficient and beautiful art form, and applied them to our work to develop a much stronger and stretchable conductor of power,” Ren said.

The University of Buffalo team used a combination of disciplines in their work, including nano-confinement engineering and strain engineering, the latter of which is used in semiconductor manufacturing to boost device performance. They also leveraged computational modeling contributions from Temple University researchers. To develop the bendable circuits the UB researchers used PthTFB, a conductive polymer, and enhanced the material's properties using kirigami. Without applying the Japanese design principles, PthTFB can be deformed up to six percent from its original shape without changing electronic conductivity. By applying the principles of kirigami, however, Ren said the researchers were able to stretch the polymer up to 2,000 percent, as well as increase its conductivity by three orders of magnitude.

Flexible electronics are the next frontier for devices, and researchers have been hard at work developing components that can bend and stretch to enable their design. One of the major applications for these types of electronics is in smart clothing, a market that analysts believe could reach $4 billion by 2024, according to the University of Buffalo team.

Ren said these kirigami-inspired electronic materials could be used not only in smart clothing but also other applications that also will require pliable circuitry such as electronic skin, bendable display screens for computers and smartphones, and electronic paper.