A European additive manufacturing (AM) initiative called Hyproline recently demonstrated a high-performance 3D printing production line for serial fabrication of small-series parts from stainless steel 316L, titanium, and copper. A coalition of technology firms undertook the effort under a three-year grant from the EU.

“The purpose of Hyproline,” said Mark Gammon, technical director at International TechneGroup (ITI), “was to build a demonstration of a high-performance production line to improve the 3D printing of small parts, coupled with a high-speed finishing line using laser polishing.” ITI, a software development firm focused on product-data integration and interoperability, was one of the participants in the project.

Netherlands Organisation for Applied Scientific Research (TNO), a Dutch non-profit organization, led the Hyproline coalition, which included ITI; Höganäs Digital Metal, which produces AM materials and technologies for metal parts; Swerea IVF, an R&D institute; CCM, a producer of manufacturing and mechatronics technologies; and the University of Birmingham. 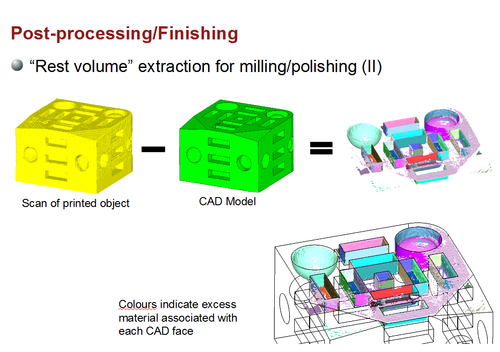 The Hyproline solution combines metal-powder-bed AM technologies with laser-based structuring. Excess material is removed at the laser processing stage by ablation and polishing.
(Image source: ITI)

The coalition received funding under the EU's Seventh Framework Programme for Research and Technological Development (FP7), a 2007-2013 program that included grants for Factories of the Future demonstration projects. Hyproline's broad objectives were to enable AM manufacturers to produce higher-value products and reduce time-to-market for small production runs, while increasing accuracy and decreasing waste and numbers of rejects. These are key objectives for small and mid-sized European companies in the global market for complex, precision metal parts produced in small series. Such parts are important in such fields as the manufacture of dental and medical implants, the jewelry industry, and a number of electronics niches.

Under its grant, the Hyproline team worked together from 2012 to 2015, when it finalized a working version of a high-speed production line. The Hyproline solution combines metal-powder-bed AM technologies with laser-based structuring, while integrating advanced systems for process monitoring and metrology.

A video from TNO shows a circular conveyor system that TNO calls PrintValley, mounted with 100 removable platforms, or pallets. The conveyor travels at one to two meters per second. As a build plate moves along the conveyor, a part is printed, 3D-scanned to measure defects, laser-machined to remove defects down to a 20 micron (μm) resolution, then removed automatically from the conveyor. An integrated robot is used to pick and place parts during production, and to remove finished products.

One of the key challenges addressed by Hyproline researchers, Gammon told Design News, was improving the quality of 3D-printed metallic parts. “The problem is, a lot of 3D printing finished product is too rough,” he said. “It needs some kind of finishing.

Software is a key component of a high-performance solution, because printing must be highly accurate, and a printed part must be scanned on-the-fly and compared to the original CAD file. These operations require fast processing of very large data sets. ITI's CADfix technology is used to compare each part's point cloud scan to the as-designed CAD geometry, then to generate a laser tool-path customized to the part -- and doing all that live on a running production line. Excess material is removed at the laser processing stage by ablation and polishing.