A humanoid diving robot has recovered treasure from the wreck of French King Louis XIV's flagship, untouched for nearly 400 years. The bot not only looks somewhat human-shaped, it's also got stereoscopic humanlike vision, artificial intelligence, and haptic force feedback.

A humanoid diving robot has recovered treasure from the wreck of French King Louis XIV's flagship, untouched for nearly 400 years. The bot not only looks somewhat human-shaped, it's also got stereoscopic humanlike vision, artificial intelligence, and haptic force feedback. This virtual diver, dubbed OceanOne, will take on underwater work too dangerous for humans, as well as exploration of the ocean's depths.

The robot's shipwreck excursion was its maiden voyage, on a dive 100 meters below the surface of the Mediterranean Sea to La Lune, wrecked in 1664 and not touched since by human hands. OceanOne operates like a highly specialized remotely operated vehicle (ROV), and looks something like an unusually shaped ROV attached to a humanoid torso, arms, and head.

During the treasure-hunting expedition, it was remotely operated by its designer, Oussama Khatib, a Stanford University professor of computer science. Khatib's team of graduate and undergraduate students helped build the robot, which is the first prototype in what he hopes will be a fleet that works in concert, according to a Stanford University news service story. 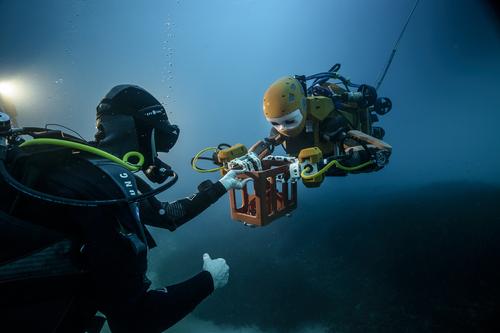 OceanOne was designed to work together with human divers, as well as independently. In the photo above, you can see it handing an object it's brought up from the wreck to a human diver. It can dive as deep as 1,000 meters, more than twice the world record for human scuba divers. Before descending to King Louis' shipwreck 20 miles off the south coast of France, the robot underwent rigorous testing in the waters nearby.

The original idea for OceanOne came from a need to access coral reefs in the Red Sea, far deeper than human divers can comfortably go. But handy as many ROVs can be, they're still not capable of the delicacy, skill, and care that a human diver can provide. The 5 ft-long bot was built from scratch to combine robotics, haptic feedback systems, and artificial intelligence. Its tail section contains computers, batteries, and eight multi-directional thrusters. Its stereoscopic vision shows its human operator what the robot sees, and its haptic feedback system lets its pilot feel whether OceanOne is grasping a delicate, light object, or one that is heavy and firm.

Two fully articulated arms end in hands with fully articulated wrists, where the force sensors that relay haptic feedback to the human pilot's controls are located. Eventually, tactile sensors will also cover each finger, but even without that degree of feedback Khatib could feel the weight and contours of a vase the robot picked up in the wreck after Khatib spotted it using the robot's vision.

OceanOne's processor also reads that same haptic data and makes sure its hands grip things firmly enough so they don't drop them, but not so tightly that they break delicate objects. This level of control makes it possible for the bot to adeptly manipulate fragile coral reefs and carefully place sensors where they're needed during underwater research.

Empower with Automation. Enhance the productivity of your factory with the power of collaborative robotics. Learn how at Industry 4.0: Smart Manufacturing, part of Atlantic Design & Manufacturing Expo, June 16 in New York. Register here for the event, hosted by Design News’ parent company UBM. Enter promo NY16DN for a FREE Expo pass & 20% off Industry 4.0 Conference.
Although the robot can communicate with human divers via hand gestures controlled by its pilot, it can also operate independently and will be especially useful when diving without them during dangerous tasks. Those might include oil-rig maintenance, deep-water mining, or underwater exploration during disaster situations like the Fukushima Daiichi power plant nuclear disaster.

OceanOne contains sensors throughout its body for gauging current and turbulence, which automatically activate its thrusters to keep the robot's body in place. At the same time, quick-firing motors adjust the robot's arms to keep its hands steady while it works. The robot navigates via data received and processed from both sensors and cameras to avoid collision. One advantage of the humanoid body shape is the ability to use its arms for bracing against impact if the thrusters aren't moving fast enough.