HomeMaterialsHeat-Free Technology Developed for Fabrication of Flexible Electronics
Recent
Materials
Researchers Use AI and Stimulation to Strengthen the Brain
Nov 30, 2021
Carbon-Fiber Composites on a Roll in Auto Wheels
Nov 30, 2021
Our First Drive in the Lucid Air EV
Nov 30, 2021
How to Build a Better Industrial Automation System Using PLCs
Nov 30, 2021
POLL
Getting Started with Cpputest for Embedded Applications
Nov 30, 2021
Opportunities for High-Performance Polymers in the Semiconductor Space
Nov 30, 2021
Meet the Most Comfortable Keyboard on the Planet
Nov 30, 2021
Mobile Plastic-Waste Upcycling Platform a Finalist in World Design Awards
Nov 30, 2021 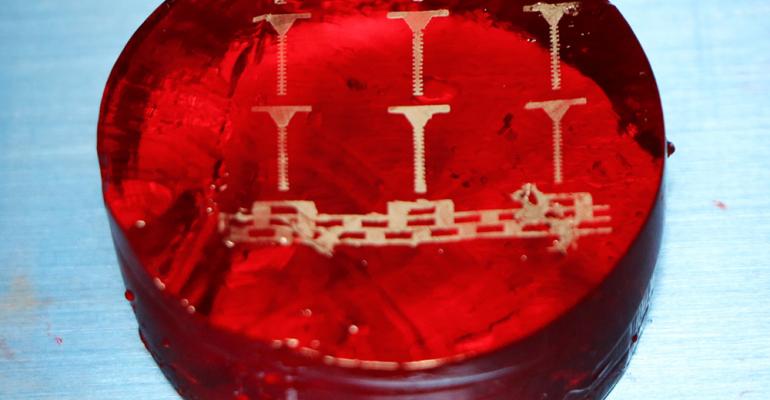 Scientists can fabricate metal interconnects for electronic devices without using heat, creating new options in material use and scientific and commercial applications.

To create parts made of metal in electronic devices, engineers have traditionally used heat, as metals must be molten to be formed. Researchers now have devised a way that eliminates the need for heat when creating electronic interconnects, facilitating the design of flexible and wearable electronics, they said.

A team at the designed the method, which pre-heats metal—in this case, an alloy of bismuth, indium, and tin--and keeps it as a liquid, creating conductive interfaces without damaging the substrate, explained University of Iowa Professor Martin Thuo, who led the research team.

“We make metallic conductive traces at room temperature and without melting the metal,” Thuo told Design News. “Unlike the silver pastes and types of conductive traces, our systems are 100 percent metal--i.e., they are exactly the same as you would make on a motherboard today, except you do not need to melt the metal when you are making this.”

Thuo also is an associate of the U.S. Department of Energy’s Ames Laboratory and a co-founder of the Ames startup, SAFI-Tech Inc. He originally launched the project three years ago as an exercise for his graduate students, and the work took off from there, resulting in the new method.

In the process, liquid metal is trapped below its melting point in polished, oxide shells, creating particles about 10 millionths of a meter across. When the shells are broken—which is done using mechanical pressure or chemical dissolving--the metal inside flows and solidifies.

This creates a heat-free weld or—in the case of the work of Thuo’s team—the ability to print conductive, metallic lines and traces on various materials, he said. The method gives researchers a greater range of substrates for metal interconnects than was possible before, as they don’t have to worry about heat damage, Thuo told Design News.

“We can now use any substrate without damage,” he said. “When heat is involved, the yield is also low--the output of a reflow oven can significantly reduce the overall yield (output) of a fab facility. It also limits the kinds of materials that can be used in electronic devices.”

The method can be used in a range of new applications and uses, some of which researchers demonstrated. The team printed metal traces on a rose; a flexible, programmable LED display on a curled sheet of paper; and metal traces on a gelatin cylinder.

In addition to interconnects for flexible electronics, engineers could use the heat-free process to create sensors to measure the structural integrity of a building or the growth of crops, or to develop electrical contacts for solar cells, researchers said.

Thuo and his researchers plan to continue to develop the process by exploring other uses of the materials as well as extending the degree of undercooling to see what effect that has, he told Design News. They also are expanding uses of the method to develop sensors for agriculture- and infrastructure-health monitoring, Thuo added.