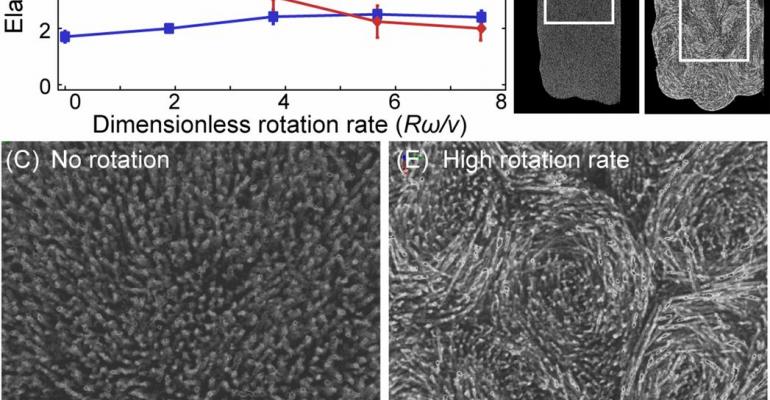 When the first ancient people mixed straw with mud to create stronger bricks for their houses, it may have been the first human-engineered composite material, but it was far behind nature. Wood is one of nature’s most fascinating composites – it combines a weak substance called lignin with long cellulose fibers that act as a polymer to create a strong yet lightweight material. Human bone combines hard-but-brittle calcium phosphate with the more flexible protein collagen to create one of nature’s strongest composites.

Mimicking nature is precisely what researchers at the Harvard John A. Paulson School of Engineering and Applied Sciences (SEAS) intended to do when they created a new “bioinspired” 3D printing methodology that allows for control of the arrangement of short fibers embedded in polymer matrices. The technique consists of fabricated carbon fiber-epoxy composites made of volume elements (“voxels” in 3D printing) with programmably defined fiber arrangements that can be different in adjacent regions – either orthogonally oriented or helically oriented fibers -- that lead to non-uniform strain and failure performance in different areas of the same printed object.

Tuning the Fiber Alignment for Strength

Existing 3D printing extrusion processes tend to align fibers either at random or in the same orientation as the extrusion. The SEAS technique, called “rotational 3D printing,” allows researchers to create more complex microstructures by programming fiber orientation within epoxy composites in specified locations. This enables the creation of materials that can be optimized for strength, stiffness and damage tolerance and tailored to alter electrical, optical, or thermal properties of the final printed objects, according to Jordan Raney, Assistant Professor of Mechanical Engineering and Applied Mechanics at the University of Pennsylvania. Raney worked on the team with lead researcher Jennifer A. Lewis, Hansjorg Wyss Professor of Biologically Inspired Engineering at Harvard SEAS.

“There’s no such thing as a universally ideal fiber arrangement,” Raney told Design News. “The lesson from nature is that the fiber alignment must be locally tuned to the specific mechanical loading conditions experienced by that particular location. The important thing is that our system enables more control over fiber alignment, so that future users have more power over how to optimize their own materials according to its specific use case.”

“Control over fiber alignment,” or decoupling fiber orientation from the prescribed print path, is achieved by using a rotating nozzle during the printing process that controls the flow of the viscous ink to create the desired fiber orientation. Specifically, fibers can be locally reoriented as the ink exits the nozzle without requiring any coupling to external acoustic, magnetic, or electrical fields. Control over orientation of the fibers would allow designers to (for example) increase the damage tolerance properties at locations on a printed object that would be undergo the highest stress during loading, strengthening the most likely future failure points.

The research builds on previous work by the Lewis Group to develop mechanisms for aligning fibers in short fiber composites. This work was novel in enabling helical fiber orientations at the voxel level. For the new process, the team developed a series of viscoelastic ink formulations composed of short carbon fiber-filled epoxy resins with varying fiber loading and resin composition. The rotational printhead was built from scratch using common, inexpensive components.

It’s run by a stepper motor that controls the angular velocity of the rotating nozzle during direct writing of the viscoelastic fiber-filled epoxy ink. The rotational printhead is mounted on a 3D motion-controlled stage that controls translational velocity and gap height during direct ink writing. According to the team, the new system could be used on any material extrusion printing method, from fused filament fabrication, to direct ink writing, to large-scale thermoplastic additive manufacturing. It can also be used with any filler material, from carbon and glass fibers to metallic or ceramic whiskers and platelets.

Depending on the application, the shape of the part, the material properties, and the loading conditions, users of the new technique will be able to identify ideal microstructures for the parts they’re designing, program them, and print them.  “Our approach enables much more nuanced control of fiber alignment, allowing users to produce local variations to the microstructure necessary to achieve optimum properties,” said Raney. “This can enable development of lightweight, tough, damage-tolerant composites for a variety of applications.”

According to Raney, there is a lot more that can be done with optimization as the team goes forward with the research; for example, coupling the new fabrication tools with efficient design paradigms. He noted it would also be useful to apply the technology to additional materials systems.

The team’s research was published in February 2018 in the Proceedings of the National Academy of Sciences in an article entitled, “Rotational 3D Printing of Damage-Tolerant Composites with Programmable Mechanics.”