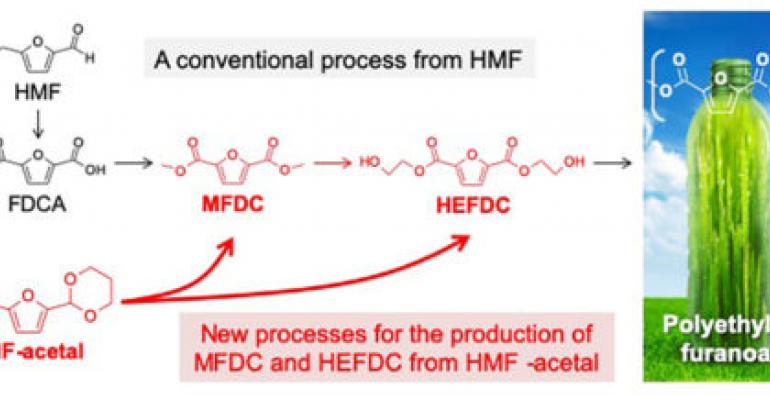 Collaboration between research groups has resulted in a new method to develop environmentally responsible bioplastics.

A collaboration between researchers in Japan and the Netherlands has developed a one-step method to fabricate plant-derived materials for the mass production of more environmentally friendly plastics.

A team led by Kiyotaka Nakajima of Hokkaido University, Japan, and Emiel Hensen of Eindhoven University of Technology, the Netherlands, developed the technology, which researchers said could help solve the problem of plastic pollution by enabling the development of sustainable products, such as beverage bottles made out of biomaterials. The works was described in a news release from Hokkaido University.

“Environmentally benign processes using renewable resources especially for commodity chemicals production are highly important to develop sustainable society,” Nakajima told Design News. This is the impetus behind his team’s work to produce a monomer, or building block, for bioplastics, he said.

Indeed, biobased plastics are emerging as a next-generation material to replace petroleum-derived plastics, which are now well known to be a scourge on the global environment.

One plant-derived polyester, called polyethylene furanoate (PEF), has risen to the top as a promising 100-percent renewables-based polymer derived from plants to replace polyethylene terephthalate (PET), which is one of the most widely used plastics in the world.

The latest research changes that with a one-step process to produce monomers called MFDC and HEFDC, researchers said. These are critical to the development of PEF because polymerization of MFDC with ethylene glycol or self-condensation of HEFDC can yield high-quality PEF, they said.

Previously, Nakajima, Hensen, and their colleagues had developed a more stable compound called HMF-acetal, which led to this recent breakthrough. They discovered that 80 percent to 95 percent of HMF-acetal in a concentrated solution can be successfully converted to MFDC and HEFDC by using a gold nanoparticle catalyst, Nakajima said.

This result represents a significant advance over the current state of the art, overcoming a typical limitation of the HMF oxidation because the method has less reaction steps and requires less energy, researchers said. Researchers published a paper on their work in the journal ACS Catalyst.

The researchers expect the new technique not only will improve the feasibility of commercial PEF production in the chemical industry, but also help advance a more ubiquitous use of bioplastics, they said. They also hope to provide insight for fellow researchers in the development of other bio-based chemical applications from various biomass-derived carbohydrates.

In the future researchers plan to improve the types of materials they use in the process, Nakajima said. While the team used HMF-acetal as a starting material, its cost is quite high due to the current process for scalable production, he said.

“Our target is to synthesize the HMF-acetal from cheap and abundant sugar, glucose, with minimizing environmental loads and maximizing production efficiencies,” Nakajima said.