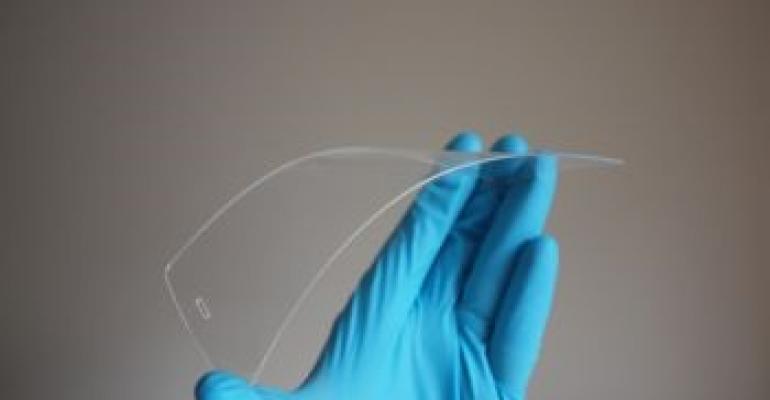 Researchers at the University of Sussex have found a solution to brittle, easily broken smartphone screens by using a combination of silver nanowires and graphene.

Anyone who has a smartphone knows how easy it is to break your screen with an accidental drop or impact with a hard surface.

Now researchers at the University of Sussex may have found a solution to this problem by leveraging what’s rapidly becoming the most useful material in chemistry: graphene.

Alan Dalton, a professor in the School of Mathematical and Physical Sciences, and a team at the university have discovered a way to replace indium tin oxide—a key material in smartphone screens—with a combination of graphene and silver nanowires. Graphene is a two-dimensional carbon material with great versatility and electrical conductivity, and silver nanowires are just that—tiny filaments of silver about a thousand times thinner than a hair.

The new hybrid material matches the performance of the existing technologies at a fraction of the cost, said Matthew Large, another professor within the school and Dalton’s co-collaborator on the project.

“Indium tin oxide (ITO) has a couple of issues that we have tried to address through our research by looking at alternative materials,” he explained to Design News. “Firstly, ITO is very brittle, as anyone that has dropped or sat on their phone will know. This is the reason that touchscreens are currently made on glass; the surface needs to be as rigid as the sensor material to prevent the sensor from breaking.”

Another reason ITO is becoming a less desirable material for smartphone screens is that the metal indium is rare and environmentally costly to extract and refine, making ITO very expensive to produce, Large said.

Silver nanowires have been in smartphones before, but never together with graphene. The team discovered that by spraying the nanowires down over a surface, the nanowires all connect together to carry electricity, Large explained.

“Graphene is fairly well-known for being one of the most electrically conductive materials in existence,” he said. “By using both of these materials together, we’ve been able to make something that outperforms either on their own.”

The team published a paper on their work in the journal Langmuir.

To add the graphene on top of the nanowires, the team used a routine that Large said is akin to “potato stamping.”  By doing this, scientists can pick up the layer of atoms and lay it on top of the silver nanowire film in a pattern. The stamp itself is made from poly (dimethyl siloxane) — the same kind of silicone rubber used in kitchen utensils and medical implants, he said.

“The graphene improves the film properties so significantly, by a factor of around 10 thousand, that we can use a tiny fraction of the amount of silver that we needed previously,” Large said. “This drops the price of our contender technology by at least a factor of 10, which is a big step for driving down device costs.”

Another benefit to the technology is that it’s flexible, not brittle, he said. “This means that we no longer need to make touchscreens on glass but can instead use flexible plastic surfaces,” Large said. “The major advantage here is that, when dropped, this shatter-proof plastic can bend to absorb the impact energy without either the plastic or sensor breaking.”

In addition to driving down the cost for new devices, the team hopes the technology also can be used to make them robust, environmentally friendly, and use less power, he added.

Researchers are currently working with external partners in materials supply and manufacturing to understand how to scale their processes up, Large said. They also are seeking other partners to improve the technology, as well as take it from the lab to market, he added.