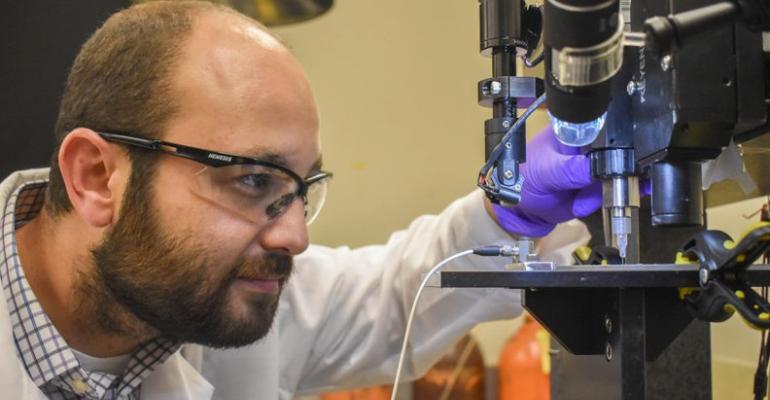 Those who suffer from diabetes could have a new, pain-free tool to monitor their glucose levels thanks to researchers at Washington State University (WSU).

A team there led by Arda Gozen and Yuehe Lin—faculty in the university’s School of Mechanical and Materials Engineering—has used 3D printing to develop a glucose biosensor that can be integrated into wearable monitors.

The wearable technology could replace glucose meters that require constant finger pricking or other glucose-monitoring systems that aren’t very cost-effective for patients, researchers said in a WSU news release.

“Our 3D-printed glucose sensor will be used as wearable sensor for replacing painful finger pricking,” Lin said. “Since this is a noninvasive, needle-less technique for glucose monitoring, it will be easier for children’s glucose monitoring.”

Wearable, flexible electronics to monitor patients’ vital and other health-related signs are already in use, and devices that can conform to skin and monitor the glucose in body fluids, such as in sweat, also are in development.

However, while current manufacturing methods to build such devices—such as photolithography or screen printing—work, they have some negative aspects. These include requiring the use of harmful chemicals and expensive cleanroom processing, as well as the creation of excessive waste.

By using 3D printing to fabricate their glucose monitors, the WSU research team solved these primary issues. They also resulted in the development of a device with more stability and sensitivity than those manufactured through traditional methods, Gozen said.

To create their device, researchers used a method called direct-ink-writing (DIW), which involves printing “inks”—in this case, a nanoscale material that is electrically conductive—out of nozzles to create intricate and precise designs at tiny scales. With this method, the team printed out flexible electrodes to create the sensor.

The DIW method developed by researchers allows for a precise application of the material, which results in a uniform surface and fewer defects, increasing the sensor’s sensitivity, Gozen said. Indeed, in tests, researchers found that their 3D‑printed sensors did better at picking up glucose signals than the traditionally produced electrodes.

3D printing also solves the problem of excessive waste caused by other manufacturing methods because it uses only the materials needed to fabricate each biosensor. A byproduct of this is also a benefit for patients because “this can potentially bring down the cost,” he added.

To use the biosensors on a broad scale, researchers recognize the need to integrate them with other electronic components on a wearable platform, something they are currently working on, they said.