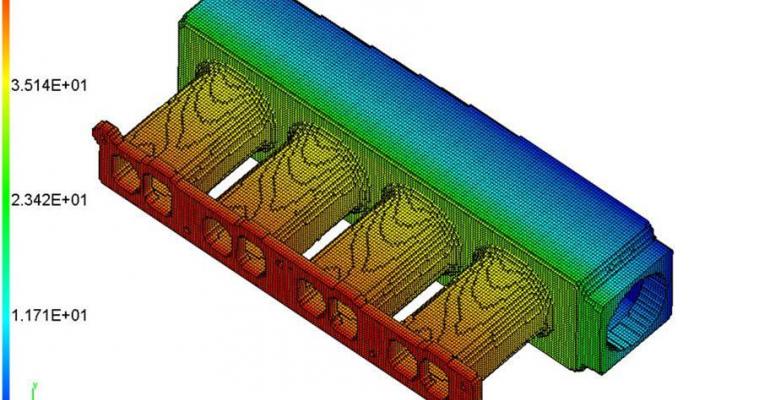 Metal additive manufacturing is regularly plagued by problems related to residual stress and the base plate sink, which leads to warpage, roughness, and net shape issues that are barriers to scaling up. An accurate material model and detailed process model can help create a fundamental understanding of thermal structural behavior that eliminates unforeseen problems.

Additive manufacturing (AM) is finding its way into nearly all industries. Its dominance in thermoplastics is growing, and it will soon become the primary method of fabrication for metal components as well. The speed of the transition for most industries embracing AM is largely driven by financial considerations, however, so technologies that can bring down costs are helping the acceleration of AM. Unsurprisingly, government-funded industries such as aerospace and defense are leading the early challenges, but big markets such as automotive, marine, power, and infrastructure are catching up thanks to new breakthroughs. One of the most important technologies accelerating AM includes simulation and testing.

In 2014, Oak Ridge National Laboratory (ORNL) set out to do develop the world’s first Big Area Additive Manufacturing platform, which was developed to design and build a concept car (“the Strati”) made of 20 percent carbon fiber-filled ABS polymer. The first prototype delaminated in several places. Using the trial and error method, ORNL ultimately perfected the build. But trial and error gets expensive, so ORNL set out to develop a virtual methodology to simulate AM fabrication to better understand the structural challenges related to large component fabrication and reduce waste.

To this goal, ORNL partnered with AlphaSTAR Corporation to simulate residual stresses and locate weak points in large 3D printed part designs. The company altered its existing GENOA (generalized optimizer analyzer) FEM-based software and MCQ (material characterization and qualification) and delivered a solution that simulated the entire build on a desktop computer in under 12 hours. Using GENOA, ORNL built an improved Strati vehicle that was presented at the 2015 North American International Auto Show in Detroit. ORNL and AlphaSTAR were jointly awarded a 2015 R&D 100 Award.

Today, GENOA 3DP is a suite consisting of GENOA and MCQ. As a tool, it can predict deformation, residual stress, damage initiation and crack growth formation associated with parts built by additive manufacturing processes. While GENOA 3DP was originally developed with thermoplastics in mind, the simulation tool has now been updated to add metal AM simulation capabilities.

Shrinkage, warpage, and residual stress are a constant threat to typical metal powder AM part creation and can lead to expensive and time-consuming repeat redesigns and iterations of the part. Metal AM is regularly plagued by problems related to residual stress and the base plate sink, which leads to warpage, roughness, and net shape issues that are barriers to scaling up. An accurate material model and detailed process model can help create a fundamental understanding of thermal structural behavior that eliminates unforeseen problems.

The process of adapting GENOA multi-scale progressive failure analysis (MS-PFA) to metal AM simulation was straightforward, according to Dr. Rashid Miraj, Director of Technical Operations at AlphaSTAR. As it does with thermoplastic, the process started with a detailed material model which served as a guide for structural behavior.

GENOA 3DP provides engineers with a platform to simulate AM material and process parameters and assess sensitivities of those parameters to find an optimized AM build solution. It allows design engineers to ensure a part “as-designed” is equivalent to “as-built” (since there’s often a big difference). The solution is to make sure the material and manufacturing variables and have been included in the analysis. In the virtual realm, designers can subject the simulated AM fabricated part to virtual service loads (environmental and structural) to ensure that the part meets specification and performance requirements. It can address fatigue, aging, and other degradation factors to assess “as-is” behavior and determine whether the AM fabricated virtual part will still meet specification later into its life.

From industry feedback, it is estimated that 10 trial prints are needed to perfect an AM build process.  It’s also estimated that virtual design of experiments with a simulation tool for optimization techniques like GENOA 3DP can reduce the total number of required prints to just two. The savings in money, time, and materials are considerable.

AlphaSTAR has used the platform in conjunction with research partners and commercial end users to improve both new and existing AM designs. Recently, GENOA3DP was used in a study that focused on the application of AM technology to fabricate a prototype wing, Miraj told Design News.

“GENOA 3DP not only improved the actual build but also, with the help of topology optimization software, ensured that the part could be built with AM by providing the necessary supports, columns, and reinforcement to supplement the delicate internal lattice structure such as building for AM, supporting sharp angles, and other complications related to AM,” he said. “AM has changed the paradigm. Previously engineers designed what could be built.  With AM, they are building what can be designed in the most efficient and cost-effective method to ensure ‘as-designed’ equals ‘as built.’”