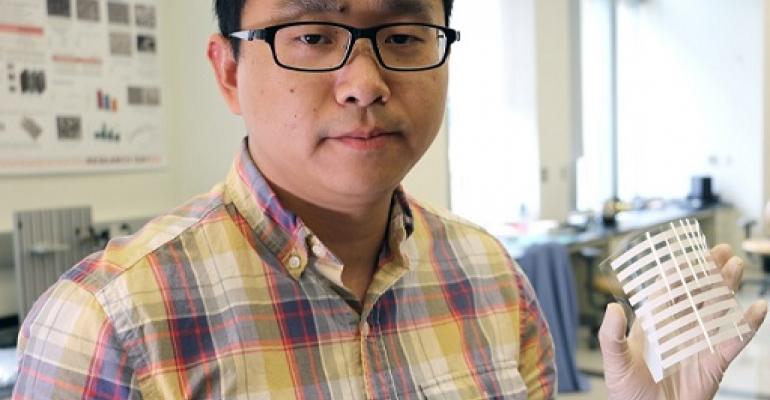 Your window shades, wallpaper, and other textiles could one day power your home, harvesting energy from sunlight and indoor light sources.

The ability to harvest solar energy is rapidly moving away from the traditional solar-panel form factor and into windows, device screens, and textiles thanks to an array of new technologies. Next on the list of possibilities are window shades and wallpaper thanks to a flexible solar panel developed by researchers at Virginia Tech.

A team of mechanical and materials engineers and chemists at the institution have developed solar modules less than half-a-millimeter thick through a screen-printing process that uses low-temperature titanium oxide paste as part of a five-layer structure, researchers said.

What’s different about these panels to typical rigid, silicon-based panels is not just that they are flexible, but also that they can absorb light from artificial sources inside a home or building—such as from lamps or light fixtures—in addition to solar energy from outside, researchers said.

One of the flexible panels—similar to tiles typically found on bathroom walls and about the size of a person’s palm—provides about 75 milliwatts of power, according to the team, which is led by Shashank Priya, a mechanical engineering professor at Virginia Tech. The tiles can be combined together to cover large areas, with a panel about the size of a standard piece of paper providing enough power to recharge a typical smartphone.

Scalability—which allows for production of the panels in sheet rolls like wallpaper to power home-security or lighting systems--is just one advantage of the panels, Priya said. Its ease of fabrication also is a benefit of the technology, he said. “It can be manufactured easily at low temperature, so the equipment to fabricate the panels is relatively inexpensive and easy to operate,” Priya said.

The panel’s ability to absorb diffused light—such as that produced by LED, incandescent, and fluorescent lights indoors—also is another undeniable advantage over typical silicon-based panels, he said.

“The properties of the panels are such that there are really few limitations in terms of light source,” Priya said. “And the fact that we are dealing with an emerging technology means we will be able to expand the utility of the panels as we go forward.”

The team has published three papers on the work, two in the journal ACS Energy Letters and another in the journal Solar Energy Materials and Solar Cells.

While the current efficiency of the cells is almost on par with typical silicon cells, there still is work to be done to pull even with the more mature technology, Priya said.

“Amorphous silicon is a fairly mature technology running at about 13 to 15 percent efficiency,” he acknowledged. “Our panels right now operate around 10 percent at the panel size. At smaller, less-useful sizes, the efficiency increases, and so we can see a potential for much greater energy-collection efficiencies.”

In addition to wallpaper and window shades, the flexible panels also can be used in textiles, such as clothing. Indeed, Priya’s lab is working to develop uniform and backpacks in collaboration with the U.S. Army’s Communications-Electronics Research, Development, and Engineering Center to help soldiers have their own mobile sources of energy while reducing the amount of weight they carry in the field.

This partnership highlights just one of the numerous possibilities for the technology as the team continues to work to create a more robust and efficient flexible panel, Priya said.

“Our edge is in the ability to fabricate large-area modules with high efficiency,” he said. “We are actively working to integrate the product with the market and we see a wide variety of uses for the technology, from clothing to windows, to smart buildings to UAVs to mobile charging stations.”