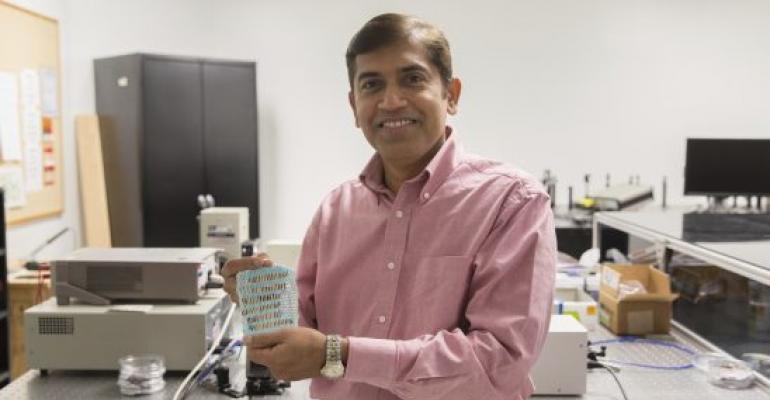 The filaments could be especially useful for military personnel, allowing them to recharge their devices while in the field or in combat situations, relieving them of the heavy burden of batteries.

A scientist at the University of Central Florida has been inspired by the 1989 film Back to the Future Part II to design filaments that can harvest and store solar energy, turning clothes into solar batteries for wearables and other devices.

“That movie was the motivation,” said Associate Professor Jayan Thomas, a nanotechnology scientist at the University of Central Florida’s NanoScience Technology Center. In particular, Thomas was inspired by main character Marty McFly’s self-lacing Nike sneakers. “If you can develop self-charging clothes or textiles, you can realize those cinematic fantasies--that’s the cool thing,” he said.

While the filaments Thomas invented don’t quite have the same kind of power Marty Mcfly’s shoes did, they can be woven into textiles to turn jackets or other items of clothing into solar batteries for powering wearable and other electronics, paving the way for people to wear their own solar-power-charging systems.

The filaments designed by Thomas and his team are actually copper ribbons that are thin, flexible, lightweight, and serve a dual purpose, with a solar cell on one side and energy-storing layers on the other, he said. Researchers then used a tabletop loom—after being instructed by colleagues how to use it—to wave the ribbons into yarn.
In proof-of-concept tests, researchers wove the filaments into clothing to show how they could be used in jackets and other outerwear to harvest and store energy to power phones, personal health sensors, and other devices.
The team published a paper about its research in the journal Nature Communications.

Thomas isn’t the only scientist focusing on developing solar-energy-generating textiles, which is a hot area of research at the moment. A number of other researchers already have revealed technologies such as mini, flexible solar panels that can be woven into clothing, or fabrics that can harvest energy from the sun and other sources. A company in Brooklyn called Pvilion has gone even further, teaming with fashion designer Tommy Hilfinger to design a jacket with integrated solar panels, as well as collaborate on other solar textiles.

One place Thomas’ filaments could especially come in handy is to allow military personnel to recharge their devices while in the field or in combat situations, relieving them of the heavy burden of batteries, he said.
“When you think about our soldiers in Iraq or Afghanistan, they’re walking in the sun,” he said. “Some of them are carrying more than 30 pounds of batteries on their bodies. It is hard for the military to deliver batteries to these soldiers in this hostile environment. A garment like this can harvest and store energy at the same time if sunlight is available.”

The filaments have other uses as well, with potential to be integrated into the design of electric cars that can generate and store energy whenever they’re in the sun, Thomas said.

“That’s the future. What we’ve done is demonstrate that it can be made,” Thomas said. “It’s going to be very useful for the general public and the military and many other applications.”