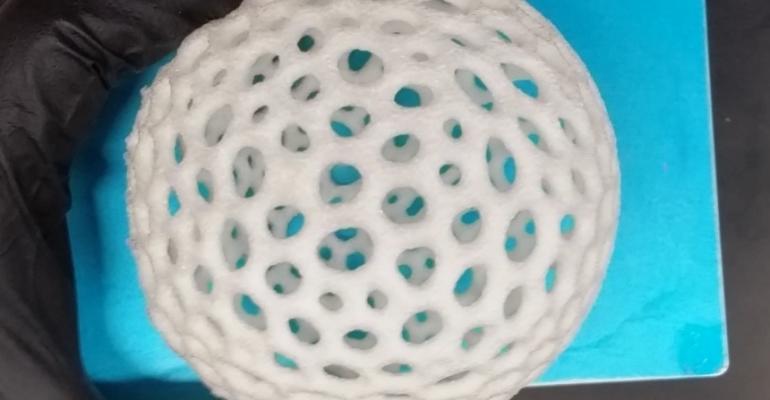 3D printing has become quite advanced, however commercial printers are currently limited to printing objects smaller than the machine itself. While 3D printing of large-form objects exists, it’s usually limited to expensive, site-specific machines that are used for industrial purposes. That could change going forward thanks to new research from researchers at the University of California (UC), San Diego, who developed a material and process for printing large objects even with a low-cost and commonly available 3D printer.

Researchers used the 3D printing process known as stereolithography, which creates objects by exposing sequential layers of light-sensitive resins to patterns of light, for their work. There are two primary hurdles when using traditional printers and resins to creating large objects, said Professor Jon Pokorski, associate professor of nanoengineering at the university.

To solve these problems, Pokorski and his team—including David Wirth, a UC San Diego graduate student researcher—developed an expandable resin that could be used to print large objects with an inexpensive, commercially available 3D printer.

After testing different resin formulas, the team developed one that could allow them to print an object that would expand to a larger size with heat, and then tested it by printing a hollow, latticed sphere. Heating the resin in an oven caused a volatile component of the material to be emitted as a gas, which created a porous, polystyrene foam-like material that was up to 40 times larger in volume than the original printed object.

The method solved both problems with printing large-scale objects with commercial printers “because the objects are printed at a small scale and expand into a much larger volume,” Pokorski told us.

However, the team was challenged as it sought to identify a “blowing agent”—or the chemical in the resin that caused it to expand--that could be used in the printing process, he acknowledged.

“These blowing agents decompose from solid or liquid to a gas generating a large volumetric expansion of the part,” Pokorski told Design News.

The team knew that blowing agents weren't stable in typical 3D-printing resin, so to achieve their desired result, they “discovered a new chemical that was stable and produced a huge volumetric expansion,” he told us.

“With this simple change we were able to generate materials that could expand up to 40x the volume of the printed part, thus solving the limitation of the size of the printer and increasing the speed at which large objects can be printed,” Pokorski told Design News.

Currently, the commercial printer that can create the largest objects, the Phenom L from technology provider Peopoly, has a build volume of 13 by 8 by 16 inches. However, using the process and material the team created, “with such a printer and an appropriately sized oven, you could produce parts up to 4 feet wide,” Wirth told Design News.

The team printed various objects to prove their work, including a small boat, which could carry about 20 times more weight at its expanded size, and a wind turbine that could produce a small amount of electricity at its larger size, they said.

While the new material isn’t as strong as polystyrene foam, its lightweight could be used for “customized parts that require a low density,” Pokorski told us. This includes windmills, aerospace parts, and airfoils.

The team plans to continue its work to expand their portfolio of materials “to create lithographic foaming polymers which are much stronger, tougher, and more durable,” Wirth added.