Engineers use finite element analysis to simulate the behavior of a pole vault.

Pole vaulting is a fascinating sport owing to the discipline and prowess of the athlete and the structural behavior of the pole: both are essential for success. From an engineering standpoint, the kinetic energy, generated by the speed of the vaulter, is stored by the pole and released in the form of potential energy. This helps the vaulter convert his momentum to the required height to clear the bar.

The pole is storing and releasing energy. When coupled with the vaulter’s skill level, you have the two primary elements involved in performance.

Some of the pole characteristics essential in determining its ability to store energy are its mass, flex number, height rating, and material. The flex number is a measure of pole deflection under a standard weight: the higher the flex number, the softer the pole. The vaulter’s hand grip, body position, and a number of other factors ultimately determine how well a pole vaulter performs, but the pole matters.

Running a finite element analysis helps us understand how the different pole characteristics affect its ability to store and release energy.

The performance of the modern pole used for vaulting has significantly improved since the inception of the sport in the mid-1800s. Much of this improvement is associated with the development of various material types. The transition to more pliable materials, such as carbon fiber composites, from rigid materials, such as hardwood and bamboo, enabled increased pole flex that helped propel vaulters to greater heights. It is no coincidence that the development of glass fiber poles in the 1960s coupled with improvements in athleticism led to the dramatic increase in heights cleared after that period.

Poles are usually hollow tubes made of composite materials such as glass-fiber or carbon-fiber reinforced plastic. Composite materials have multiple layers of fiber (reinforcement) and resin (plastic matrix) that give a pole its strong yet light quality.

When these poles flex they undergo various modes of shape change: one side of the pole stretches along its length, and the other side compresses, creating an oval shape. These shape changes could lead to the failure of the pole by either damaging the resin matrix or the fiber in tension or compression. Hence, a big factor in pole design is the material properties of the composite.

For instance, the fiber imparts the tensile strength to the composite, so the plastic resins need to elongate as much as the fiber to take advantage of the fibers’ strength. The fibers could also be finely tuned to the balance between stiffness and strength by controlling the quantity and orientation of the fiber in each layer of the composite.

This seemingly complex term can be broken into two words: nonlinear and dynamics. Owing to the linearity of a majority of materials, the way they deform can be studied to a certain degree of accuracy using elasticity constants that aren’t affected by shape changes. Such analysis is called linear analysis.

However, this assumption is quickly invalidated in the case of a pole vault due to the large degree of deformation that enables the elasticity of the pole and the loading direction to change. A nonlinear finite element analysis enables one to keep track of these changes in stiffness and loads as the pole flexes and recovers.

Most structural analysis relies on the system being analyzed to achieve static equilibrium. This means that only the magnitude of the forces acting on the system matter, and the speed at which these forces are applied is irrelevant. This kind of analysis is called a static analysis.

In our case the pole is in motion and has momentum at the time of impact with the ground. The weight of the pole vaulter acts as a force and is constantly changing direction with respect to the pole as the pole moves. The acceleration and velocity of the pole is of extreme importance in accurately modeling its behavior; hence, a nonlinear dynamic analysis is used to simulate the pole vault.

Figure 1 depicts the time curve utilized to control the variation of one of the forces imparted to the pole by the vaulter. After about 0.2s the pole reaches its flex state and the load is released. Following this, the recovery of the pole, based on its rigid rotation (at about the point of contact) takes over the “takeoff” and the “over the top” stages. 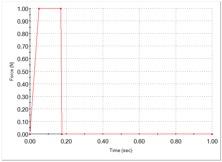 As far as constraining and stabilizing the pole vault, the out-of-paper deflections were assumed to be zero and assigned to the analysis setup as a symmetry restraint at about the center of the pole. This reduces the number of degrees of freedom of the model, subsequently reducing the required computation time. Also, the pole was constrained at a particular point to mimic the pivoting of the bottom part of the pole to enable the pole to rotate (and deflect) and execute the pole vault action. 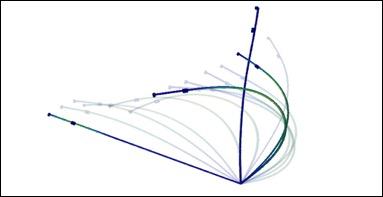 Figure 2 depicts snapshots from every analysis step to demonstrate the behavior of the pole in time. These results show that although the pole vault action has been replicated with a creative combination of forces and constraints, the material used for the pole appears to be soft. This increases the chance of structural failure of the pole vault and hence a stiffer material needs to be selected for the analysis.

Simulating a design in real-world scenarios helps predict the behavior before the prototyping phase. This enables us to prevent different failures due to buckling, yielding, and fatigue. It also provides detailed insight into high stress regions so design improvements can be made.

When viewed from a macroscopic standpoint, the quality of sporting equipment has seen tremendous upgrades due to advanced materials and better understanding of the equipment behavior thanks to tools such as finite element analysis.

Arunachalam Thiraviam is a simulation product specialist with GoEngineer. He is involved in educating and assisting customers with studying the quality of product design through FEA, CFD, and Injection Molding analysis. He has a Master’s Degree in mechanical engineering from North Carolina State University where he was involved with studying the dynamics of floating vertical axis wind turbines. Besides engineering, he plays the guitar and writes music in his free time.