Cold temperatures caused the hull of the RMS Titanic to fail. But with better metallurgy and connector technology, Titanic's hull might have remained intact.

In ordinary weather conditions, metallurgy never could have played a role in the sinking of the RMS Titanic in the early morning hours of April 15, 1912.

But the north Atlantic weather conditions on the night of April 14, 1912 were anything but ordinary. Experts would later say they were a once-in-40-year occurrence: no moonlight; no waves; unusually cold water. The ocean, they said, “was like a millpond.”

That’s why the watchmen stationed in the RMS Titanic’s crow’s nest, 120 feet above the Atlantic Ocean, were initially unable to see the iceberg dead ahead. Ordinarily, the moon and waves would have combined to create a phosphorescent wash on the side of the berg, allowing it to be spotted from as far away as 6,000 yards. But on this night, without the benefit of splashing water or a flash of moonlight, no one saw the iceberg until the Titanic was a scant 500 yards away. 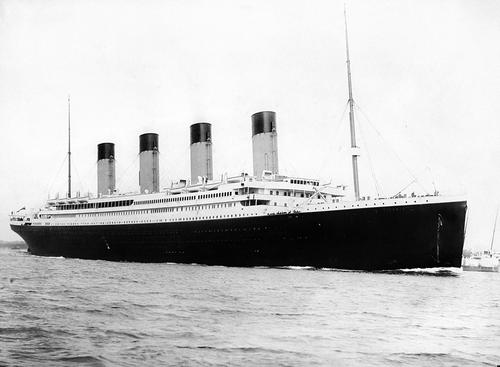 The rest is history. Titanic brushed the iceberg, leaving a 168-foot-long “scratch” on its side. At that moment, metallurgy became a factor. With sea temperature hovering around 29F, the one-inch-thick hull plates buckled and then fractured due to brittleness. Then they separated, leaving a gash that measured a little less than an inch wide. In all, the opening in the ship’s side totaled only about 12 square feet, but the ocean gushed through it.

”The chief designer looked at the gap,” J. David Rogers, chairman of geological engineering at Missouri University of Science & Technology and an expert on the Titanic’s sinking, told Design News. “He made measurements, made calculations, and 45 minutes later told the captain, ‘We’re not going to be able to save the ship.’”

Indeed, the RMS Titanic was doomed, for engineering reasons not fully understood at the time. The creation of the steel in open hearth furnaces in Scotland had left the hull plates with an undesirable chemical composition. “The presence of relatively high amounts of phosphorous, oxygen, and sulfur has a tendency to embrittle steel at low temperatures,” wrote H.P. Leighly, a professor of metallurgical engineering at Missouri University of Science & Technology, in a 1998 technical paper on the subject. The embrittlement, he said, promoted extension fractures up along the buckled plates.

Still, metallurgy wasn’t Titanic’s only engineering problem. Incredibly, the ship’s hull was held together by six million rivets, which engineers now know to have a shear capacity only about one-fourth that of a comparably sized bolt and nut. As a result, according to work done at the National Institute of Standards and Technology (NIST) by Timothy J. Foecke and Jennifer Hooper McCarty, the collision force sheared the rivets, and the buckled steel plates came apart. “It was all about the rivets,” Rogers told us. “Today, when we go out and look at seismically retrofitting a bridge, the first thing we do is get rid of the rivets and put some bolts in. But they didn’t know that at the time.”

After the icy water began gushing into the hull, Titanic faced more challenges, and standard practices of the day offered no support. Most notably, the ship’s bow dipped deeper into the sea, raising the water pressure and causing it to fill faster. Today, the captain would have counter-flooded the aft end of the ship as a way of keeping the nose up. “If they had counter-flooded, they could have kept the Titanic afloat until 11:30 the next morning,” Rogers said. “But they didn’t have the damage control training that we have today.”

Within a few years, experts would understand that the loss of 1,500 passengers could have been averted. If the captain had hit the iceberg head on, if watertight bulkheads had extended to the first deck, if sluice gates and bilge pumps had been used to pump the water out, or if enough lifeboats had been available, the worst of the tragedy wouldn’t have happened. (For more information, see Rogers’ paper, “Nine Ways the Titanic Might Have Been Saved.”)

But such solutions are always more obvious in retrospect, Rogers told us. “A bunch of things that were not on the Titanic became standard just a year or two later,” he said. “But we learn from failures. They get everybody’s attention. That’s how we advance the state of the art and the standard of care.”