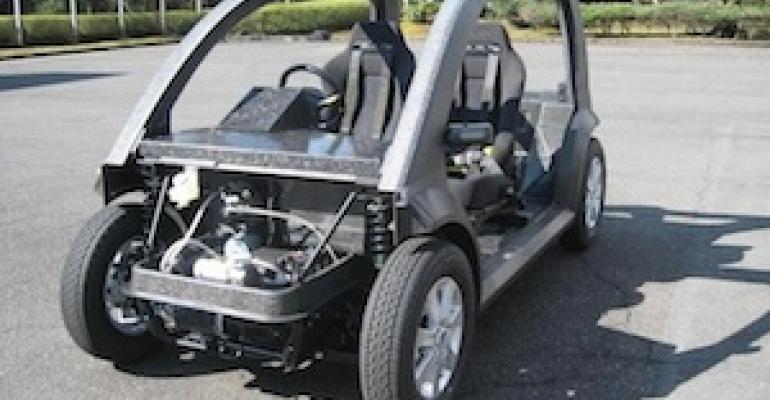 In one example, Teijin developed an electric-vehicle (EV) concept car that features a frame made entirely from thermoplastic CFRP and weighs only 103.4 lb, or roughly one fifth the weight of a conventional automobile's cabin frame. The four-seat EV is capable of speeds up to 37 mph and has a cruising range of 62 miles.

The CFRP innovation fits into a revised and amped-up R&D strategy at the Teijin Group. "In order to deal with rising nations, we must conduct research and development in a more efficient manner and at a faster pace and to respond more promptly to the changing market environment," says Toshiaki Yatabe, chief technology officer for Teijin.

In another example, Winzeler Gear, based in Harwood Heights, IL, and one of America's three largest plastics gear molders, engineered polyacteal transmission gears for an Ultra Light Urban Vehicle project.

The brainchild of Martin Morris, professor of mechanical engineering at Bradley University, is a vehicle that features just three wheels and is licensed as a motorcycle that carries two people, baggage and weighs 430 lb. It offers regenerative braking, a top speed of 45 mph and a range of 40 miles.

"Traditionalists would say harsh transmission applications preclude POM," says Tim Brogla, program developer, DuPont Performance Polymers, which supplied polyacetal for the gears "Clearly, this project challenges some of those 'absolutes;' it doesn't require a leap of faith to see these gears in small engine transmissions, such as riding lawn mowers and golf carts."

In a third demonstration project, the body of the electric Wind Explorer is made primarily of carbon fiber reinforced plastic (CFRP) composite that surrounds a light weight structural foam core called Rohacell. Its lithium-ion batteries are charged by a mobile wind turbine or-in exceptional cases-in the conventional manner from the power grid.

Rohacell technology from Evonik is a polymethacrylimide (PMI) rigid foam that is used in aircraft, helicopters, trains and ships, and is gaining ground in automotive construction. It allows weight savings of 60 percent compared to standard steel parts.
0 comments
Hide comments
Related
You Might Like