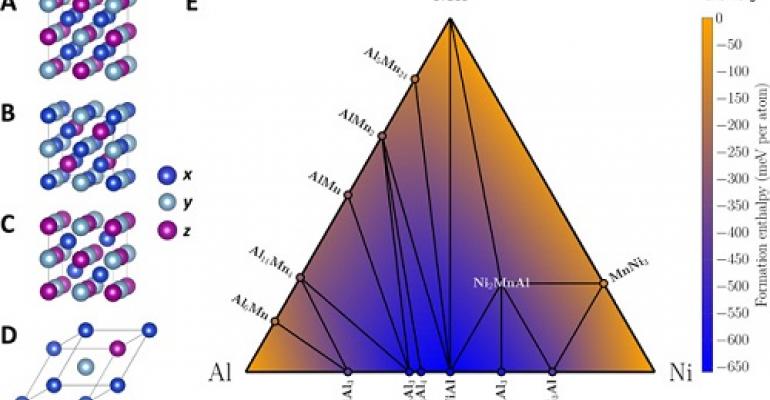 High-performance magnets are ubiquitous in technology today, from hard drives to hybrid and electric vehicles to medical imaging equipment. The development of these magnets is a story itself. Only about 5 percent of inorganic materials are magnetic at all, and the development of high-performance magnets has proven to be a long and unpredictable process that largely relied on trial and error.

Magnetism is a highly sensitive phenomenon. From the perspective of the atomic structure, it requires the right confluence of properties and conditions, yielding a multitude of mechanisms for achieving magnetic ordering. It’s also not a very intuitive process, which makes it hard for humans to predict. Today, there are only about two dozen magnets suitable for technological applications.

Using the computer model, the researchers focused on Heusler alloys, or materials made with atoms from three different elements arranged in one of three different structures. With 55 elements to choose from (and all possible potential arrangements), the manual process would have required testing 236,115 combinations. The model permitted the team to test hundreds of thousands of possibilities rapidly, resulting in two magnets that could be fabricated at thermodynamic equilibrium.

Corey Oses, a doctoral student in the Center for Materials Genomics at Duke and one of the co-authors of the research paper, told Design News that the goal was to speed up the process of developing new magnets.
“Not much progress had been made since about the 1980s, considering the current market for permanent magnets is still dominated by neodymium/samarium-based materials,” he said. “Unfortunately, the trial-and-error approach is not systematic: there is no known or direct path to the discovery of a new magnets. This research represents such a path, and has been validated by the discovery of two new magnets.”

The team used the High-Throughput Framework AFLOW (Automatic FLOW for Materials Discovery), which leverages VASP (the Vienna Ab-Initio Simulation Package) for calculating the electronic structure and optimized atomic geometries. The AFLOW package populates the AFLOW.org repositories consisting of nearly 1.7 million compounds and their properties. One of these repositories is the Heusler database used by the team in their research. From the 236,115 possible combinations, the computational model identified 35,602 potentially stable compounds. Further testing for stability narrowed the list to 248, but only 22 materials showed a calculated magnetic moment. From here, the team narrowed the list to 14 by eliminating any materials with competing alternative structures “too close for comfort.”

“A thermodynamic analysis indicates the stability of candidate materials, determined by characterizing the energetic landscape,” Oses told Design News. “Stable structures define the minimum of this surface.  This can be seen as a ‘competition’ among structures of similar compositions for the minimum energy stable position. Depending on the particular system and the local environment of similar structures, the competition can be high (many similar structures near the minimum), or low (a clear ‘winner’ is present, with others far behind).  We defined a descriptor to quantify the intensity of this competition, and screened for the clear ‘winners.’”

When it came time to synthesize the materials, the lead researcher, Stefano Curtarolo, professor of mechanical engineering and materials science and director of Duke’s Center for Materials Genomics, and the team worked with Stefano Sanvito, professor of physics at Trinity College in Dublin, Ireland. Attempts to create four new materials predicted by the computer model resulted in success with the two final materials.

The materials developed are significant because they don’t involve the use of any rare-earth minerals, which are difficult to obtain. The high costs and limited availability of many existing high-performance magnets make them impractical for many applications. Additionally, one of the materials, Co2MnTi, also featured an unusually high "Curie temperature,” which is desirable in a high-performance magnet.

The research team notes that their work isn’t about the two specific magnetic materials they developed, but the process itself, which paves the way for large-scale design of novel magnetic materials at potentially high speed. These new materials will be significant to any device or apparatus that uses an electromagnet: motors, wind turbines, transformers, MRI machines, hard disks for computer memory and more, including (potentially) the long-anticipated promises of maglev transportation devices.

Going forward, the team plans to continue combing through the Heusler family for more magnets and leveraging the same approach in new families of materials. The researchers’ work was published in Science Advances.