With a better understanding of materials’ response to load and temperature, researchers could potentially use the knowledge to improve design. The research could even help geologists studying plate tectonics.

Understanding how materials deform -- bend and buckle -- is critical to materials science. Dislocation theory has traditionally been used to explain how materials deform when they are stressed, but it hasn’t always told the whole story. It doesn’t completely explain the rippling and kink band that creates buckles, particularly in layered materials: everything from sedimentary rock to thin sheets of graphite.

Research published last year by a group at the Massachusetts Institute of Technology (MIT) theorized a new deformation micromechanism they called “ripplocation,” or an atomic-scale ripple that happens near the surface of 2D materials. Their work suggested that while dislocations and ripplocations happened in much the same way -- one atomic layer moving relative to another -- the physics behind the two ideas was different. 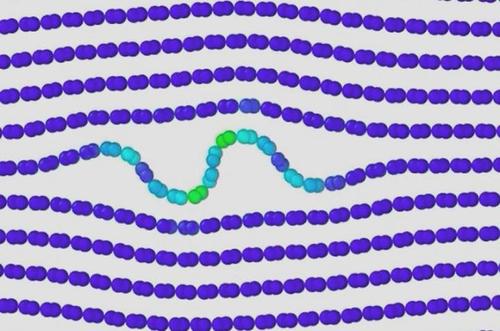 Drexel University researchers have demonstrated how a newly discovered mechanism called "ripplocation" -- the buckling of a material's atomic layers -- occurs during deformation in bulk layered materials.

According to dislocation theory, when the planes of layered solid materials are loaded and unloaded edge-on, they will either bounce back and return to their original form -- a characteristic of elastic material -- or remain permanently indented. Ripplocation behavior explains a third scenario in which the material returns to its original form, though the action dissipated considerable amounts of energy. In this latter scenario, it’s ripplocation that allows atomic layers to glide relative to each other without breaking the in-plane bonds.

This year, researchers from Drexel University set out to investigate the mechanics of how layered materials such as graphite, layered silicates, the MAX phases, and other plastically anisotropic or layered solids deform and accommodate strain. The study was conducted by a team of researchers from Drexel's College of Engineering’s Department of Materials Science and Engineering and led by Michel W. Barsoum, PhD, distinguished professor and head of the MAX/MXene Research Group; assistant professor Garritt J. Tucker, PhD; and Mitra Taheri, PhD, Hoeganaes associate professor.

Designers & Innovators Learn more about some of the latest designers and innovators and what they're up to at ESC Silicon Valley. December 6-8, 2016 in San Jose. Register here for the event, hosted by Design News’ parent company UBM.

Graphite is a material known to kink and whose forces between the atoms are well known, so the team chose it for its initial simulations. They began by constraining the edges of the sample while compressing the material. They observed the motion of a multitude of ripplocations that became the material’s “kink boundaries.” They found that in graphite, ripplocations are attracted to other ripplocations, both within the same and on adjacent layers. It’s the latter that results in kink boundaries.

To recreate the behavior in the lab, the team examined samples of a layered ceramic known as a MAX phase, in which the layers were loaded with a spherical indenter. They then used high resolution transmission electron microscopy (TEM) to observe the defects that formed as a result of the deformation. The team found that these defects were not dislocations, but instead more consistent with what ripplocations would look like: unambiguous evidence for strain normal to the layers in the TEM.

Dr. Barsoum told Design News that, previous to this work and the MIT research, dislocation theory was not able to explain kink bands that are ubiquitous in nature in general, and geology in particular. It also couldn’t explain the fully reversible nature of some deformation.

“Dislocations are generated and move as a response to shear stress,” he said. “Ripplocations are a buckle phenomenon and thus require compressive stresses. Another way to say it is that it would be impossible to nucleate ripplocations if you pulled a material -- better yet a fabric -- in tension.

The images generated in the lab convinced the team they had found ripplocation.

“We indented the graphite and it spontaneously formed a large amount of kink boundaries and then -- more importantly -- observed their total reversibility,” he said. “Knowing how something happens at the atomic scale and how that something affects properties is the essence of materials science. So now that we have the right micromechanism, we know more about a concept that has been misunderstood.”

With a better understanding of materials’ response to load and temperature, researchers could potentially use the knowledge to improve design. The research could even help geologists studying plate tectonics.

“Knowing that ripplocations exist and taking them into account can much better estimate the amount of energy stored in a given formation, assuming the material is linear elastic,” Barsoum told us. “This can be important in predicting the severity of earthquakes, for example.”

Going forward, the team’s work will focus on understanding ripplocations as thoroughly as science already understands dislocation theory. The team’s research was published in the Sept. 19, 2016 online edition of the journal, Scientific Reports.