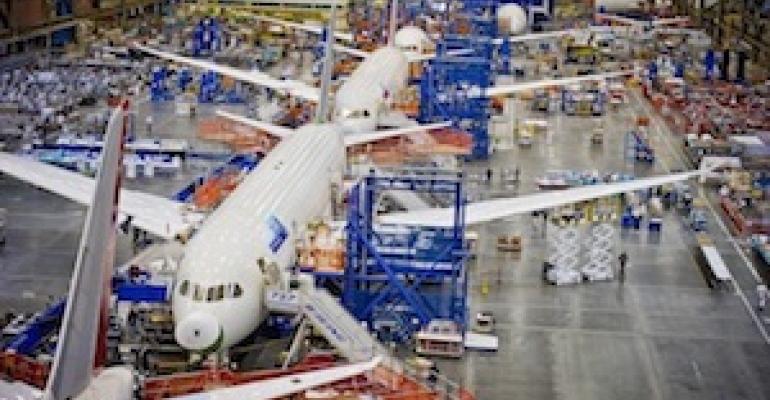 Anticipated build rates for the Boeing Dreamliner 787 are driving demand for fasteners.

"Demand for titanium fastener materials is nearing its prior peak high of 2008," says William Wulfsohn, CEO of Carpenter Technology, Wyomissing, PA. "And finally, we are beginning to see order activity pick up for nickel and stainless aerospace fasteners."

The Dreamliner, a much-heralded composite-bodied aircraft, was originally scheduled to enter service in May 2008. But the project has been beleaguered by a myriad of design, supply chain and manufacturing problems, starting with a shortage of fasteners.

The plane's maiden flight took place on December 15, 2009, and Boeing hopes to receive final U.S. Federal Aviation Administration flight certification this summer. The first delivery will be made to All Nippon Airways this fall if all goes well. There are currently 835 firm orders for the Dreamliner, making it one of the most successful aircraft launches of all time.

Aircraft analysts predict that Boeing will deliver six to 18 Dreamliners this year and hopes to achieve a build rate of 10 planes a month by 2013, a record rate for a wide-body jet.

Boeing controls production of composites through a closely monitored supply chain. Carbon fiber and epoxy prepregs come from a tight relationship with Toray Industries, which has been rapidly ramping up capacity.

Assembly of the composite components requires a large number of high-quality, lightweight fasteners from suppliers such as Carpenter Technology, Alcoa Fastening Systems and Allegheny Technologies (ATI). It's a far cry from the traditional aircraft assembly system in which thousands of rivets join pieces of aluminum sheet.

The 787 uses eight times more titanium fasteners by weight than the 737, the aircraft has been in the news recently because of apparent rivet failures that caused aluminum structural problems in the roofs of Southwest jets.

Aircraft fastener supplies have been negatively affected in the last three years by speculation in the supply chain. Some distributors bet on strong demand for the Dreamliner in 2008 through 2010 and were burned when production was postponed multiple times.

As a result there was a supply overhang that made it difficult for OEM suppliers to operate consistently.

Bill Christopher, executive vice president at Alcoa, says he expects normal fastener demand for the 787 to resume later this year. Fasteners are close to a billion dollar business ($868 million in 2010) at Alcoa.

ATI currently sells four types of titanium fasteners for aircraft applications, and is now qualifying a fifth material, ATI 425, which has strength and ductility properties making it useful for applications that require bending and forming.

"We continue to believe that the 787 will be one of the great innovations of our time," says L. Patrick Hassey, CEO of ATI. "We also believe that Boeing will ramp production of this airplane as fast as it can and that it will challenge the supply chain."

In yet one more hiccup for the launch of the 787, the National Labor Relations Board (NLRB) charged in a complaint this month that Boeing was retaliating illegally against its largest union when it decided in 2009 to put a second Dreamliner assembly line in a nonunion plant in South Carolina. Boeing said it will "vigorously contest" the case and proceed with plans to start assembling planes in Charleston, S.C. in July.
0 comments
Hide comments
Related