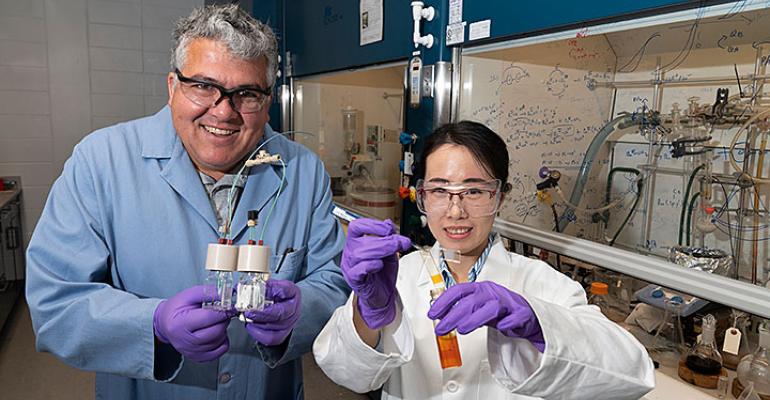 Researchers at the Department of Energy (DoE) have achieved a chemical reaction that drastically improves upon current methods for artificial photosynthesis, providing a new process for the development of cleaner, hydrogen-based fuels.

Specifically, scientists at the DoE’s Brookhaven National Laboratory have doubled the efficiency of a chemical combo that captures light and splits water molecules so the building blocks can be used to produce hydrogen fuel. “Artificial photosynthesis will enable the production of sustainable and renewable fuels from sunlight, water and carbon dioxide,” Javier Concepcion, a Brookhaven chemist who worked on the project, told Design News.

In natural photosynthesis, plants use sunlight to transform water and carbon dioxide into carbohydrates such as sugar and starches. The energy from the sunlight is stored in the chemical bonds holding those molecules together.

Researchers have been seeking ways to develop artificial ways to mimic this natural process by using light to split water into its constituents--hydrogen and oxygen. The idea is that the hydrogen can later be combined with other elements such as carbon dioxide to make fuels.

The Brookhaven team has now developed a platform that integrates two types of materials--chromophores for light absorption, and water-oxidation catalysts to split water into oxygen, electrons, and protons--on the surface of photoanodes. These anodes are electrodes that carry out an oxidation driven by photons.  “The electrons and protons are transported to another electrode (the cathode) where they are combined to produce hydrogen gas, a fuel,” said Concepcion.

The approach uses molecular “tethers”—or simple carbon chains that have a high affinity for one another—to attach the chromophore to the catalyst, researchers said. The tethers hold the particles together so electrons can transfer from the catalyst to the chromophore.

This is an essential step for activating the catalyst—but it also keeps the two elements far enough apart that the electrons don’t jump back to the catalyst, Concepcion said. “This new platform allow us to combine these chromophores and catalysts without the need of complicated synthetic procedures and with precise control of the distance between them,” said Concepcion. “By controlling the distance we can control the rate of electron transfer steps between catalysts and chromophores required for the system to work.”

Researchers published a paper on their work in the Journal of Physical Chemistry C.

Each time the catalyst loses four electrons, it becomes activated with a positive charge capable of stealing four electrons from two water molecules, which breaks the hydrogen and oxygen apart. The oxygen bubbles out as a gas, while the hydrogen atoms diffuse through a membrane to another electrode. There they recombine with the electrons carried by the wire to produce hydrogen gas, which can be used as fuel.

“This research is fundamental in nature and focused on developing the underlying science that will allow actual real-life applications of artificial photosynthesis,” said Concepcion.

This is key to the future design of cleaner energy, which is “something that mankind has to achieve to ensure the survival of our species,” said Concepcion. “The timeline for this achievement can be argued, but its need is without question.”

Researchers plan to continue their work by studying in detail each of the many processes required for the new system to perform well. “This will include a combination of experimental and computational studies, including machine learning and artificial intelligence to help us to understand the current system and to design better ones,” said Concepcion.