A Harvard researcher has designed a bio-inspired swimming robot that uses rat cells for movement.

Cyborgs -- entities with both organic and biomechatronic body parts -- are still mostly the stuff of science fiction. But that’s changing thanks in part to scientific advancements like a bio-inspired swimming robot recently developed by a researcher at Harvard University that uses rat cells for movement and can help advance the fields of medicine and robotics.

The robot is the work of Kevin Kit Parker, a professor of bioengineering and applied physics at Harvard who was inspired by batoid fish such as stingrays and skates to create a bio-hybrid system that enables a tissue-engineered ray to swim and phototactically follow a light cue.

Parker said the “eureka” moment for the project came when he was with his daughter Caroline at the New England Aquarium in Boston. “She was trying to pet a stingray and she put her hand in the water and the stingray quickly moved away from her hand in a very elegant way,” he explained. “It struck me like a thunderbolt that I could build that system in the musculature [that] would look very much like the … surface of the endocardio layer of the heart.”

The resulting robot has a microfabricated gold skeleton and a rubber body powered by rat heart-muscle cells. The robot’s cardiomyocytes were genetically engineered to respond to light cues, so that the movements propelling the robot through water would follow a light source. 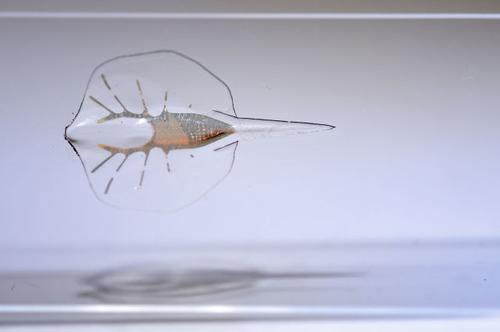 Harvard University researcher Kevin Kit Parker was inspired by fish such as stingrays and skates to design a bio-robotic system that uses living cells to move by following light cues.
(Source: Karaghen Hudson and Michael Rosnach, Harvard School of Engineering and Applied Sciences and Massachusetts College of Art and Design)

“By patterning dissociated rat cardiomyocytes on an elastomeric body enclosing a microfabricated gold skeleton, we replicated fish morphology at 1/10th scale and captured basic fin deflection patterns of batoid fish,” Parker and his team explained in an abstract to an article about the work in the journal Science.

The speed and direction of the ray was controlled by modulating light frequency and by independently eliciting right and left fins, allowing the bio-hybrid machine to maneuver through an obstacle course, the team added.

This light-driven movement also was inspired by an experience Parker had with his daughter, he said. “When [she] was little I used to point a laser pointer at the ground and she would try to stomp on it,” he said. “We would go for a walk down the street and I could lead her along the sidewalk safely by just pointing a laser pointer at the ground. It occurred to me that we could use optogenetics to mimic this with the tissue-engineered Stingray. So that's what we did.”

The work has applications for a number of scientific disciplines, including medicine and robotics, among others. For the former, it will lead to a better understanding of the human heart by observing how marine life forms use their muscle to move fluid, Parker said.

“In our studies of the heart, we have started looking at marine life forms in the muscular pump that they represent,” Parker said. “The idea is to get a better insight into the human heart and heart disease by reverse-engineering other forms of muscular pumps that we see in nature.”

For the latter, the robot shows how living muscle cells -- in this case, rat heart-muscle cells -- are much more energy efficient than synthetic actuators “and can be programmed to do cool things,” Parker said.

“The end result … is that the cardiac physiologist sees how muscular architecture potentiates unique pump function,” he said. “The robotics engineer sees how to use cells as a living engineering material. The marine biologist sees this as a means of understanding why the stingray is built the way it is. This kind of transdisciplinary approach to a scientific problem is part of the fun. The perspectives of all scientists are equally valid and they depend on the lens through which they view the problem.”