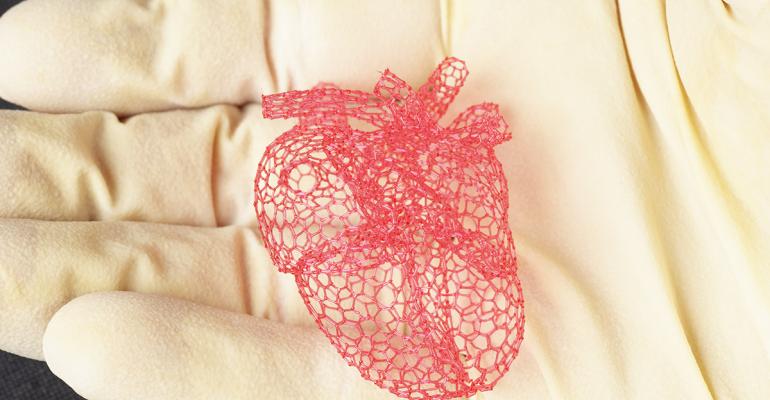 Using a 3D printer and a process for a type of sugar used to make throat lozenges, researchers have created complex structures for cell-based biomedical engineering.

Engineers have found a “sweet” way to develop more complex 3D-printed structures beyond what’s possible with most commercial printers today. The team, which is from the University of Illinois, has built a 3D printer that fabricates sugar-based structures that can be used for applications in biomedical engineering, cancer research, and device manufacturing.

Inspired by researchers before him who worked with sugar mainly to print free-form structures, Ph.D. graduate student Matthew Gelber said he aimed to improve printing methods using this material. He wanted to discover what was possible. “It was clear that sugar printing could be very powerful, but there was a lot more engineering science that would have to be done before its full potential was realized,” he told Design News.

In their work, researchers used a different type of sugar than what we normally think of when, for instance, baking a cake. Rather than sugar in granular or powder form, Gelber and collaborators worked with isomalt-the type of sugar alcohol used to make throat lozenges, which allowed them to achieve the arbitrarily complex lattice networks they printed in their research.

“Isomalt is better for a few reasons, the biggest one being that it doesn't burn,” Gelber explained. Isomalt also is less prone to crystallization, which makes it more conducive to 3D printing.

The team worked with free-form printing, which means that as the nozzle moves through space, the melted material hardens. The result is a sturdy structure.

The researchers built a custom printer using high-end components that could achieve the combination of mechanics necessary to achieve the types of structures they wanted to print. These included the correct temperature, pressure to extrude it from the nozzle, diameter of the nozzle, and speed to move it so it prints smoothly but then hardens into a stable structure, Gelber said.

“Most of the parts on the printer are designed to be used with optics or in semiconductor manufacturing, and as such, are a lot more precise than what goes into most 3D printers,” he said.

The team modeled the printing process to help tune the parameters accordingly to realize their printing goals, Gelber noted. “We modeled the different forces that act on the model during printing and used this to develop a printing ‘plan,’” he explained. “Because this printer doesn't assemble things layer-by-layer, there are a lot more ways for the print to fail. We developed an algorithm that minimizes the probability that the print will fail by intelligently choosing what to print earlier and what to print later.”

Researchers published a number of isomalt-based scaffolds. They believe they will have significant application in biomedical researchers for carrying cells or mimicking blood vessels to transport nutrients in tissue or to create channels in microfluidic devices.

In fact, the team already is using the scaffolds in a variety of microfluidic devices and cell cultures. It also is working to develop coating for the scaffolds to control how quickly they dissolve. The researchers plan to continue this work to combine these structures with cells, playing to the strength of printing with a material like isomalt, Gelber told Design News.

“The point of sugar printing is that you can put the sugar construct into a cell-laden gel, cure the gel, then dissolve the sugar out,” he said. “This leaves a network of interconnected channels in the same shape as your original sugar construct. These channels look a lot like blood vessels or the secretory ducts of the breast or prostate.”

Given the way these structures behave, there are some interesting things you can do by seeding the channels with cells,” Gelber added, such as “make model systems that give you insight into, for example, cancer metastasis.” The team published a paper on their work in the journal Additive Manufacturing. A video on YouTube also shows the printer at work.