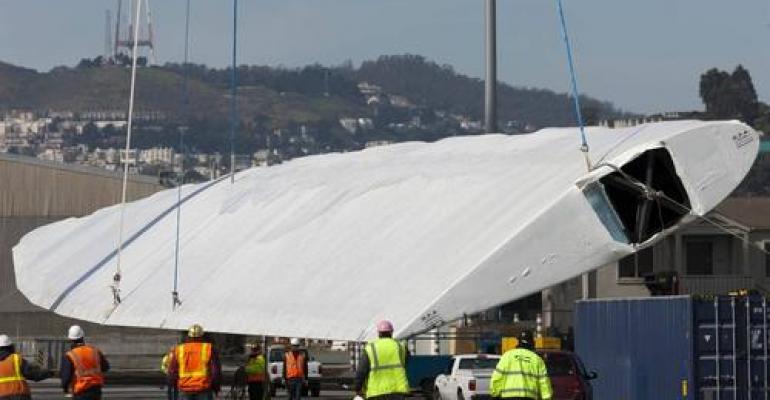 The world's fastest racing boats will make their US debut this November at a racing series in San Diego that tests new design concepts for the America's Cup.

Those design concepts promise to be the most revolutionary in the history of the race. "This will be a competition for the Facebook generation, not the Flintstone generation," said Russell Coutts, an engineering graduate of the University of Auckland in New Zealand and CEO of the defending champion team, now called Oracle Racing, when discussing rules for the next America's Cup.

Wing-sail catamarans made with high-tech carbon fiber-reinforced plastics will compete at the 34th America's Cup in San Francisco in 2013. Approximate dimensions of the new boat class -- called AC72s -- are 72 feet in overall length; 15,500 pounds in displacement; and 3,229 square feet in wing-sail area. The height of the wing-sail is 131 feet, just 66 feet shorter than the wingspan of the Boeing 787 Dreamliner, the carbon composite-sheathed aircraft making its commercial debut this fall.

Coutts's comment about the "Flintstone generation" refers to the fact that the America's Cup dates back to 1851 and is the world's longest-running sporting competition. And there's an old guard that thinks the race should be run with single-hull yachts. Cats have raced in the America's Cup before and so have wing-sails, but the new "Facebook generation" under development by Larry Ellison's Oracle Racing Team will feature the fastest wing-sails ever seen. 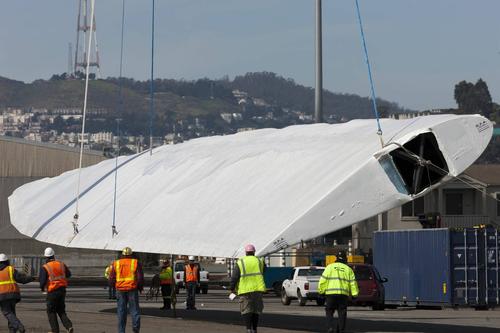 Speed for a sailboat is determined by the amount of horsepower divided by the amount of drag. The optimal shape chosen for the Oracle boat's wing-sail is an elongated teardrop, thick and rounded as it heads into the wind. A trailing wedge tapers into a thin wedge.

In an article in Wired magazine, Ian Burns, Oracle Racing's team coordinator, said that the AC72s will feature a lift coefficient as high as 4 or 5, compared to 1.2 for a traditional sail, and 2 or more for wing-sails used in the AC45, which is a de facto working prototype that will be used in the San Diego race.

Prior to the development of Boeing's Dreamliner, the only significant experience in building large shapes out of carbon composites was hulls for yachts. Ironically, the aircraft design engineers may have something to learn now from the design and production of the wing-sail for the AC72.

Tim Smyth of Core Builders Composites told Wired magazine that it's important to consider the potential stress on each part and to lay the carbon fiber appropriately. Fibers need to be oriented in the direction of force. A carbon composite half-tube operates as the main structural element of the wing-sail as well as the front of the wing.

The challenger of record in the next America's Cup is the Royal Swedish Yacht Club, which will be represented by a professional sailing team called Artemis Racing. Artemis has contracted with Spanish company Future Fibres to build its composite structures. It says it has built "a no-compromise, world class production facility, including a 50m autoclave, 60m climate-controlled laminating paint booths, and a 70m assembly and fit-out area."