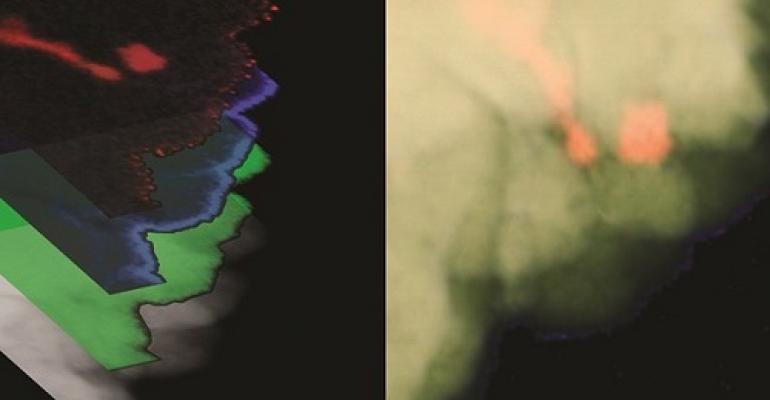 Waste heat remains a largely untapped source of renewable energy. But that could one day change, thanks to a new composite material.

Waste heat—emitted by cars and electronic devices as they run—remains a largely untapped source of renewable energy. But that could one day change thanks to a new composite material developed by researchers at The Ohio State University that they said can generate a significant amount of energy.

Back in 2012, a team comprised of some of the same scientists at the university used a quantum mechanical effect to convert heat into electricity in a thin film. Now their new research—which uses magnetism on a composite material of nickel and platinum--recreates that effect and improves upon in it in a material that is more suited for industrial use, they said.

The team—led by Joseph Heremans, a professor of mechanical and aerospace engineering—also increased the voltage output of the material 10 times or more than what was possible in the thin-film technology, allowing for an unprecedented amount of thermal energy to be derived from the material, they said.

Researchers believe that if special materials can be designed to harvest thermoelectric energy from the waste heat emitted by electronic devices and vehicles, those devices and vehicles can run more cost-effectively and efficiently, said Stephen Boona, a postdoctoral researcher at Ohio State who worked on the research.

“Over half of the energy we use is wasted and enters the atmosphere as heat,” he said. “Solid-state thermoelectrics can help us recover some of that energy. These devices have no moving parts, don’t wear out, are robust and require no maintenance.”

To date, materials that can harvest this waste heat are “too expensive and not quite efficient enough to warrant widespread use,” Boona said. This is why researchers like The Ohio State University team are “working to change that,” he said.

A scanning-transmission electron microscope image of a nickel-platinum composite material created at The Ohio State University that can generate energy from waste heat using thermoelectrics. At left, the image is overlaid with false-color maps of elements in the material, including platinum (red), nickel (green), and oxygen (blue). (Source: Isabel Boona and Renee Ripley, The Ohio State University)

Boona and the Ohio State team aren’t the only researchers working on this problem, however. A team of researchers in the Materials Science and Engineering department at the Ulsan National Institute of Science and Technology in Korea revealed recently high-performance, liquid-like materials that can directly brush-painted on almost any surface to turn waste heat into energy.

Heremans’ team has taken a different approach, and what it’s done in its most recent work to build on previous research is to increase the waste-heat output for a composite of two very common metals--nickel with a just a small amount of platinum--from a few nanovolts to tens or hundreds of nanovolts. The energy is in a smaller voltage, but also in a much simpler device that requires no nanofabrication and can be easily scaled up for manufacturing use, researchers said.

To apply their previous technique to thicker pieces of material required the research team to rethink the equations that govern thermodynamics and thermoelectricity, which were developed before scientists knew about quantum mechanics, Heremans said. The team also had to work with magnons, or waves and particles of magnetism, rather than the photons typically used in quantum mechanics, he said.

Up until now, research in magnon-based thermodynamics has been done in thin films typically only a few atoms thick. But now Heremans’ team has shown that the same technique can be used in bulk pieces of composite materials to further improve waste-heat recovery, he said.

While the composite material is not yet part of a real-world device, researchers said believe their work may eventually lead to applications for common waste heat generators, including car and jet engines, Heremans said. And because it’s so general, the idea also can be applied to a variety of material combinations, which can enable approaches that don’t require expensive metals like platinum or delicate processing procedures like thin-film growth, he added.