A German researcher is using the strength of coconut shells as inspiration for the design of concrete for earthquake-proof buildings.

Anyone who’s ever tried to cut open a coconut knows how tough its shell is. Now that strength is being used by a German researcher as inspiration to design tougher concrete to help construct buildings that are earthquake-proof.

Stefanie Schmier, a plant biomechanist in the Plant Biomechanics Group of the University of Freiburg, has been for the last year and a half examining the three-tiered structure of the coconut’s shell -- which includes the outer exocarp, a fibrous mesocarp, and a tough inner endocarp. A coconut’s shell is designed this way to ensure that its seeds successfully germinate, with the endocarp surrounding the pulp that contains the developing seedling.

Observations from this work could lead to the development of stronger concrete for buildings to make them better able to resist damage from earthquakes and other natural disasters, Schmier said. In particular, she told Design News that her work is focused on the endocarp, trying to “identify relevant structures” within it to transfer that knowledge into concrete. 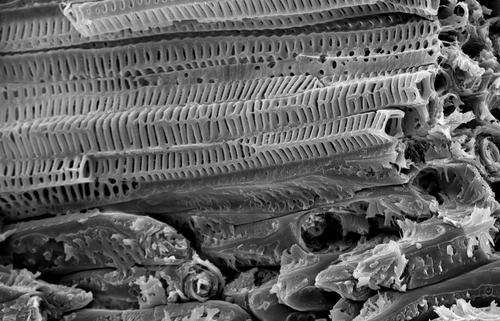 What Schmier and her team found is that the endocarp layer consists mainly of highly lignified stone cells. The vessels that make up the layer’s vascular system have a distinct, ladder-like design, which researchers believe can help withstand bending forces. Each cell is surrounded by several lignified rings, which are joined by parallel bridges.

Researchers believe that the angle of the vascular bundles helps to divert the trajectory of the cracks, which is their focus for the development of stronger concrete. The longer a crack has to travel within the endocarp, the more likely it is that it will stop before it reaches the other side.

“Until now we thought that the coconut endocarp is so tough, because it is able to deflect cracks,” Schmier said. “This means that a developing crack doesn't run straight from the outer side to the inner side, but as soon as it reaches a vascular bundle it runs along this bundle, inside of the endocarp. Through this elongation of the crack path, the probability increases that the crack stops before reaching the inner side. With our research we want to transfer this mechanical behavior to concrete structures -- for example, beams.”

Partners on the project are constructional engineers from Stuttgart, who are working on what's called functionally graded concrete. “This is a new manufacturing process, which enables them to create, for example, density gradients into concrete structures,” Schmier explained. “Theoretically this process would also allow [the addition of] fibers or other particles within the concrete.”

Those same partners are also using another inspiration from nature -- sea urchin spines, which they have been studying longer -- to develop a functional design of the concrete, Schmier said. Researchers will continue mechanical tests based on what they’ve learned from their coconut research to soon come up with the first designs for concrete cubes, she added.

“When testing the resulting cubes, we will get a feedback [to discover] if our hypothesis were true and we can concentrate on additional structural parameters, or if we first have to understand our role model in greater detail,” Schmier said.