Climb Glass Walls Like a Gecko With DARPA Tech 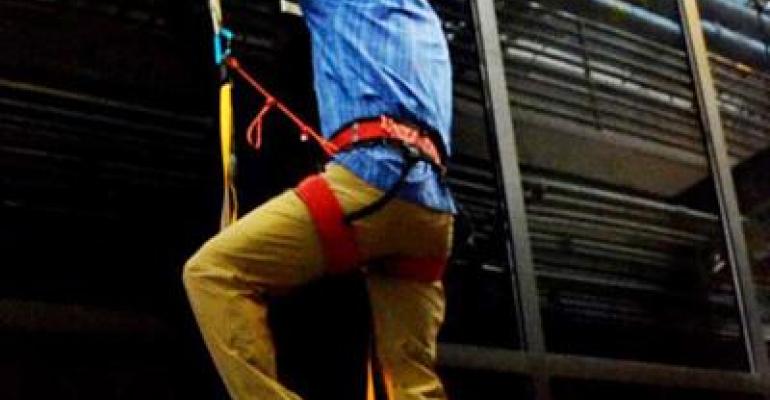 For the first time ever, a human has scaled a glass wall using a reversible adhesive inspired by gecko feet. The DARPA-funded research that developed the polymer microstructure technology on handheld paddles is part of the agency's Z-Man program. This program aims to give soldiers in urban environments ways to scale vertical walls quickly without ropes or ladders.

In one test, a human weighing 218 lb climbed up and down a 25-ft glass wall, carrying a 50-lb load and gripping a pair of the paddles, one in each hand, without using any other climbing equipment. DARPA says the materials technology that made this possible was developed by engineers at Draper Laboratory. DARPA's first demonstration of this climbing technology with humans was in February 2012. Tests have been ongoing since then, but this is the first time it's been tested while climbing glass. 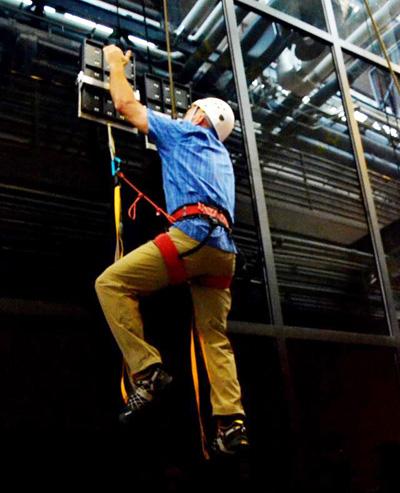 According to DARPA's description of the Z-Man program on its program page, the "Geckskin" material is a stiff, synthetic, reversible adhesive fabric that's been impregnated with an elastomer. Inspired by the complex structure and operation of gecko feet, researchers designed adhesive pads using this material that mimics that structure at multiple scales, including the animal's macroscopic foot tendons and the much tinier setae and spatulae on a gecko's toes.

Each individual, microscopic, stalk-like seta on a gecko foot has a bundle of hundreds of nanometer-scale spatulae, or tips, that contact the surface the animal is climbing. The gecko's toes can easily attach and detach from a surface, even one as slippery as glass, due to van der Waals intermolecular forces between that surface and the spatulae on the gecko's toes.

Because of the huge difference in scale between geckos and humans, the engineering research team created climbing paddles larger than the human hand that can balance enough adhesive force in both directions: the normal direction, perpendicular to the vertical surface, and the shear direction, parallel to the vertical surface. This keeps climbers from falling off the vertical surface each time the paddles are detached and reattached. In order to produce materials that mimic the gecko toes' microstructures and their high aspect ratio, the Draper Laboratory team also had to come up with new technologies for microfabrication and nanofabrication. These may be applicable to reversible adhesives in other applications, such as biomedical, industrial, and consumer.

Gecko feet -- and the van der Waals intermolecular forces that help them stick to almost any surface -- have been the inspiration of several different types of materials, adhesives, and gripping devices. Some we've told you about include Festo's NanoForceGripper device. Another possibility may be Boston Dynamics' six-legged RiSE climbing robot, which uses micro-clawed feet to climb vertical textured surfaces. True, it's motorized, but also true is that it's a lot bigger than a gecko yet can climb vertically (though not on glass). Boston Dynamics has remained extremely mum about how all its robots do what they do, which isn't surprising considering all were originally developed with DARPA funding.

Other robotic climbing methods are used by those that climb wind towers to do maintenance. Two we've told you about include the Helical Robotics HR 1000-LL that works by magnetics, weighs at least 90 lb and can carry an additional 50 lb or more up a wind tower shaft. The other is the International Climbing Machines robot that uses vacuum force, weighs 30 lb, and has a pull-off strength of more than 225 lb.